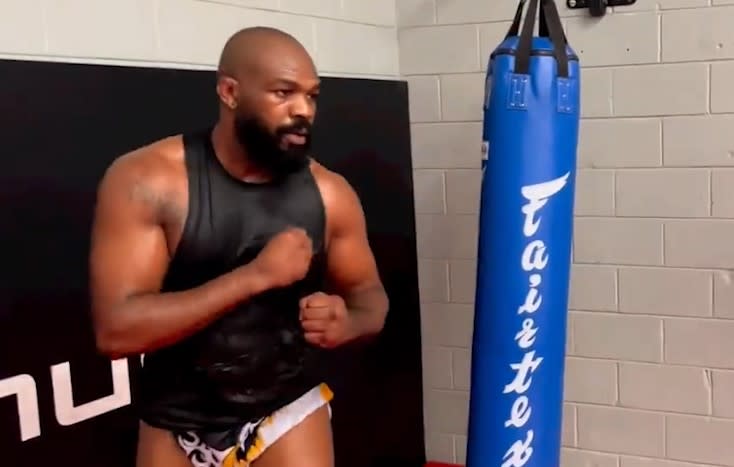 Jon Jones has been working towards his heavyweight debut, but it hasn’t come without criticism.

The UFC Hall of Famer and former Light Heavyweight Champion last saw action at UFC 247 in February 2020, where he made a unanimous decision for the title defense over Dominick Reyes. Since then, he has been working on a new challenge by taking on the heavyweight division.

Jones hasn’t rushed the process, but some fans are apparently getting restless. UFC president Dana White recently stated that Jones is “ready to go” and expects to take on current heavyweight champion Francis Ngannou or former champion Stipe Miocic. White also stated that he is a “huge believer” in ring rust, and despite his troubles outside the cage, the UFC boss categorized Jones as the greatest of all time.

In a recent video on Instagram, a heavyweight Jones showed off some striking pairings with his longtime standout coach Brandon Gibson. The footage was met with mixed reactions, however, as some felt Jones’ speed may have taken a dip.

Check out how Jones responded to critics of his strike and the timeline of his return below:

Patience is a virtue

“The biggest complaint I hear from fight fans these days is, ‘the dude takes too long, he’s never going to fight,'” Jones wrote. Twitter. “It sounds like people are getting impatient. It’s a big problem to have.”

Jones says he focuses on what he can control

Correct me if I’m wrong, but I’m pretty sure in one of Dana’s last interviews he said, ‘Jon is ready to go, just see what happens between Stipe (Miocic) and Francis (Ngannou), ‘” Jones wrote on Twitter. “Right now I’m focusing on mastering what I can, which is packing on the pounds.”

“To everyone who said I looked a little sluggish in my last workout video, I appreciate the extra motivation,” Jones wrote. Twitter. “I’ll push harder, can’t wait for all of you to see your boy in real fighting form. Everything has its process.”

Jones is aiming for a return at the end of 2022 against Ngannou?

“I’ve heard whispers about November, but honestly I have no idea,” Jones continued Twitter in response to a question about his return. “I’ve heard that Francis could potentially get back on the table.”

“Personally I don’t feel sluggish,” Jones wrote on Twitter. “I am aware that I am not in the camp and that I am in a bulk phase. But I love that people judge that version of me, it can only work in my favor.”