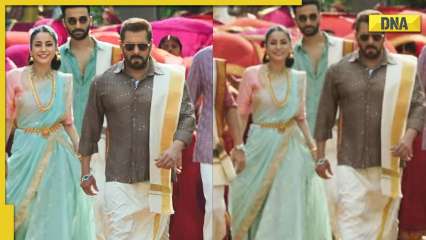 On Wednesday, the Kisi Ka Bhai Kisi Ki Jaan teaser starring Salman Khan was released. However, what caught everyone’s attention was Shehnaaz Gill walking in the clip with Salman Khan. A few minutes after the teaser was released, the actress started trending on social media.

Her fans expressed their happiness after seeing the Kisi Ka Bhai Kisi Ki Jaan teaser with Shehnaaz Gill. They took to Twitter and shouted at the actress, one of them wrote, “#ShehnaazGiIl looks so cute in South Indian clothes our fans are thrilled with this glimpse in teaser @ishehnaaz_gill.” The second said: “Good luck to the team!! More power for shehnaaz Go Girl Congratulations on your Bollywood debut May you shine. The third person wrote, “Excited for Shehnaaz Bollywood Debut Best of luck to all team members.”

#ShehnaazGil looks so cute in South Indian attire that our fans are thrilled with this glimpse in teaser @ishehnaaz_gill#KisiKaBhaiKisiKaJaan #SalmanKhan pic.twitter.com/NE0UmDO1a9— Sujana Indrani (@IndraniSujana) January 25, 2023

The fourth person commented: “Theaters are going to explode….bhaijaan is officially coming back..!!” The fifth said, “You can ignore Bollywood, but you can’t ignore Salman Khan.” On Wednesday, Salman Khan himself shared the trailer with the caption, “Sahi ka hoga sahi, galat ka hoga galat, #KisiKaBhaiKisiKiJaanTeaser out now…” In the teaser, he can be heard saying “come on..”

For the inexperienced, Kisi Ka Bhai Kisi Ki Jaan directed by Farhad Samji was originally scheduled to release on December 30, 2022, but Salman Khan decided to postpone the film to April 21 on the occasion of Eid 2023 as his spy thriller Tiger 3. for release on Eid, was pushed forward to Diwali 2023.

The entertainer is said to be the official remake of the 2014 Tamil blockbuster Veeram, headlined by Ajith Kumar. Farhad had initially pitched Veeram’s remake to Akshay Kumar as Bachchhan Paandey but later changed Bachchhan Paandey’s script into the remake of another 2014 Tamil film, Jigarthanda starring Bobby Simha and Siddharth.