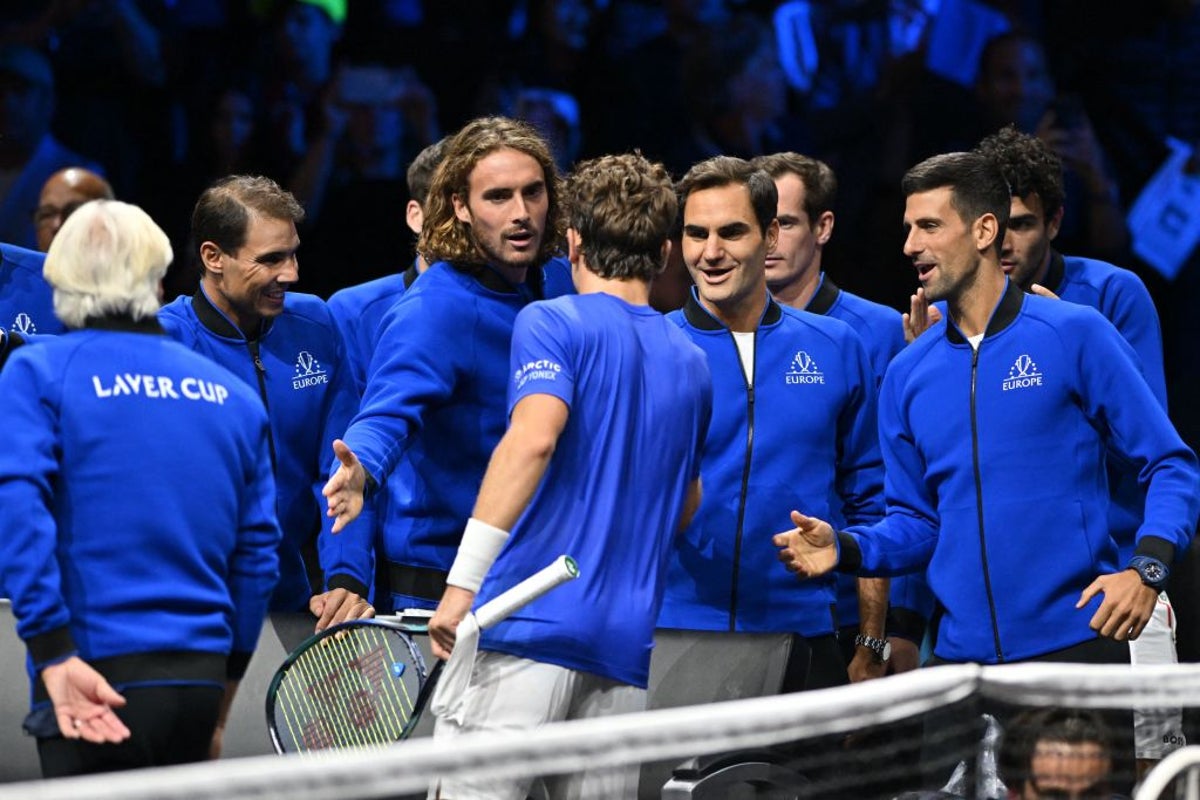 A historic night of tennis awaits in London as Roger Federer retires from the sport and plays the last game of his career alongside Rafael Nadal in the Laver Cup. Federer, who will become arguably the greatest champion in tennis history, will retire at the age of 41 and the moment has brought the sport and its rivals together at the O2 Arena.

Federer’s wish to play his last game with his great rival Nadal has been granted and has organized a special occasion with Novak Djokovic and Andy Murray also competing for Team Europe. They will take on Team World, which is led by John McEnroe, and has lost all four previous editions of the match play-style event.

See also  Driven by her love for her late father, this accountant opened an art gallery for his 1000 paintings

Three singles matches will be played prior to tonight’s doubles. Casper Ruud won the opening game of the day against Jack Sock 6-4 5-7 (10-7), followed by Stefanos Tsitsipas who crushed Diego Schwartzman 6-2 6-1 to double Europe’s lead.

However, the match was overshadowed by a bizarre protest against climate change in which a man set his arm on fire while standing on the pitch, wearing a t-shirt that read: “End UK Private Jets”.

Murray then takes on Alex De Minaur and the eyes of the world turn to Federer for the last time as the Swiss concludes his storied career. Follow live updates from the opening day of the Laver Cup below:

Laver Cup 2022: Program and results from tonight so far

Well, that’s the opening session of the Laver Cup in the books and as predicted, the tournament favorites have stormed Europe into an early lead.

Team World will have their best hopes in singles tomorrow, where the points are worth double, while Alex De Minaur will hope to win them later against Andy Murray.

However, the day has so far been rather overshadowed by that dramatic protest and stunning images of the man setting himself on fire. Pretty remarkable scenes.

A bizarre protest has caught our attention at the O2 Arena after a man set his arm on fire while on the track.

The incident was not shown by broadcasters, but photos from the court showed the man screaming in pain.

He was then removed from the field by security and led away from the arena.

The protester was removed from the court and detained

A hugely impressive win for Stefanos Tsitsipas and Team Europe takes a 2-0 lead after winning both singles in the opening session.

Tsitsipas breaks again! The Greek will now serve for the match.

Tsitsipas takes the lead once more with a nice hold – finished with an overhead volley tapped to the net and then a great inside-out forehand that caught the line.

Tsitsipas then breaks again – he is now driving.

Tsitsipas returns with aggressive hitting from the baseline. A double fault by Schwartzman provides a breaking point, but Tsitsipas’ return is long, net.

The first is saved, but Tsitsipas lands another with a nicely angled forehand. Schwartzman should save this too, but he’s blinking! We are level again.

However, hold on. Tsitsipas comes out for the second set – after a short break during which a towel was needed to mop up some moisture on the track – and takes a chance on a risky drop shot that misses its target.

It is followed by a foul and suddenly Schwartzman has two breakpoints – Tsitsipas saves them both with an iron blow from behind the baseline.

This match has found its lead – some great points in this long deuce… And there’s the break! Tsitsipas had saved three but not the fourth when he framed a forehand. Schwartzman gives Team World hope.

In contrast, Tsitsipas rattles a handhold to love, removing a game from the set.

He comes out looking determined to get the job done and there is a tight forehand in Schwartzman’s net to set up 15-30.

Brilliant from Tsitsipas! A fitting tribute to Federer of the Greek for sending a brilliant one-handed backhand down the line for a clean winner.

Two set points, but he only needs one. Schwartzman goes long and Europe takes the opening set again.

Schwartzman needs all the help he can get as Tiafoe provides some coaching on the bench, while Federer delights fans on court by signing a row of tennis balls.

The Argentinian connects with a nice backhand winner, but Tsitsipas really puts the pressure on from the baseline. Schwartzman is dragged to the deuce, but manages to escape with the hold.

Putin’s allies slammed Russia’s retreat from a city in Ukraine, calling military leaders “garbage” and saying they should be “sent barefoot with machine guns...