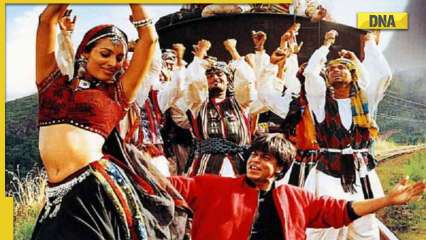 Directed by Mani Ratnam and starring Shah Rukh Khan and Manisha Koirala in the lead roles, Dil Se is one of the most critically acclaimed Hindi films of the 1990s. The movie soundtrack by AR Rahman is still popular today with memorable tunes like the title track, Satrangi Re, Jiya Jale, Ae Ajnabi and of course Chaiyya Chaiyya.

Chaiyya Chaiyya, recorded on a moving train, is considered one of the greatest hits of Rahman and Gulzar, who wrote the lyrics. Shah Rukh Khan and Malaika Arora dance on top of a train in the music video. In a recent interview, Malaika recalled how the Pathaan actor worried about her safety while recording the song choreographed by Farah Khan and sung by Sapna Awasthi and Sukhwinder Singh.

See also  Leslie Jordan shares a look at his home in MTV Cribs, filmed before his death at age 67

Speaking to Bollywood Bubble, fashion diva Malaika said, “He (Shah Rukh Khan) insisted I have to be harnessed because he was afraid I would fly off the train. But it’s hard to dance, imagine that part yours is yoked and bound. But we did it”.

In 2017, while traveling by train to promote Raees, SRK had revealed that he was the only one not strapped on top of a train as he had to do several jumps. According to ETimes, the superstar said, “The dancers were all tied up, that’s why it was very difficult. The train was slow, but often those sky bridges came and there was no communication like you have speakers now.”

See also  Qala star Babil Khan responds to comparison with father Irrfan Khan, says 'as long as I can...'

He continued: “I remember Farah Khan and the rest of the crew wearing a white cloth. Every time they put it on it meant the song would stop and just duck. It was very scary. Because even when you lay down, it was like you could literally feel the bridge go over you. That song was shot in guerrilla style. The train stopped and started suddenly. It was very difficult to record the song. It was fun, but not without difficulties.”

Border Force Strikes: How Can They Affect Christmas Travel Plans?