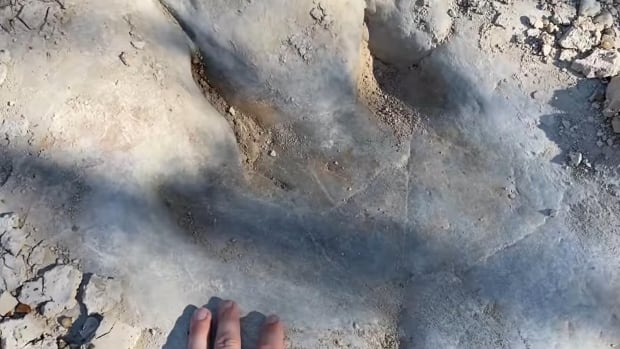 A man who dug up dinosaur footprints in a protected area in northern BC has been fined and sentenced to nearly a month in prison.

A county court ruling released this week says Bennward Dale Ingram and three others used power tools and a sledgehammer for more than two hours to extract tracks from the Six Peaks Dinosaur Track site near Hudson’s Hope, about 150 miles away. north of Prince George, BC, in summer 2020.

“Large slabs of fossil traces were either removed or were damaged by being broken off and possibly destroyed. The power tools used included a portable generator, air compressor and air chisel, and heavy hand tools including sledgehammers and crowbars,” the statement read.

“Mr. Ingram was observed using a sledgehammer and crowbar and other digging tools.”

The ruling said the “excavation” only stopped when witnesses showed up and the men left the site.

Preliminary studies of the Six Peaks Dinosaur Track site, first discovered in 2008, found more than 500 dinosaur footprints on about 750 square meters of land — about one-tenth of an acre.

The tracks were from a range of dinosaurs that roamed the sandy terrain during the early Cretaceous period until 125 million years ago — including some of three of the “major” groups of Cretaceous dinosaurs, the theropods, ornithopods, and sauropods.

The Six Peaks Dinosaur Track site has been protected by provincial land law since 2016, making it illegal to use the land for anything other than preservation and preservation.

Ingram, who is 39 and lives in Alberta, was charged and pleaded guilty to one count of unlawful excavation on Crown land under the Land Act.

Judge Darin Reeves fined Ingram $15,000 and sentenced him to 25 days in jail.

He described the site as one of the “most important track sites in North America” ​​due to its diversity of fossils, and lamented that the stolen tracks have not been recovered.

The ruling added that the sandstone damaged during the illegal excavation will now erode much more quickly.