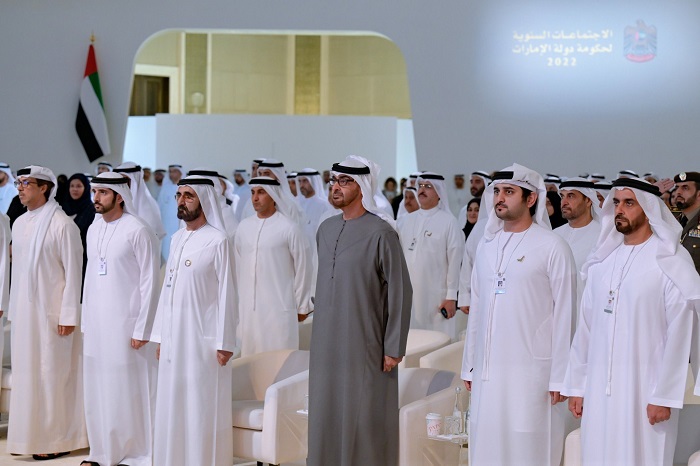 His Highness Sheikh Mohammed bin Zayed Al Nahyan, President of the State, “may God protect him,” and His Highness Sheikh Mohammed bin Rashid Al Maktoum, Vice President, Prime Minister and Ruler of Dubai, “may God protect him,” today, Wednesday, witnessed the conclusion of the annual meetings of the UAE government 2022, which were held On the 22nd and 23rd of November in the capital, Abu Dhabi.

His Highness Sheikh Mohammed bin Rashid Al Maktoum said: “The annual meetings of the UAE government establish the commitment of all government institutions and agencies at the federal and local levels to implement the vision and directives of His Highness Sheikh Mohammed bin Zayed Al Nahyan, President of the State, which guarantees the achievement of prosperity and stability for the country and the citizen, and raising The quality of life for its children, and the continuation of the prosperity of our society, and support the competitiveness of the UAE regionally and globally in various development indicators, and enhance the readiness of generations for the future with its opportunities, challenges and variables, so that the future of our homeland and the future of the people of the UAE will always be better, God willing, and with the vision of Mohammed bin Zayed .. and with the competencies, diligence and work of its children in the fields all “.

His Highness Sheikh Mohammed bin Rashid Al Maktoum added: “During our current annual meetings, we follow up on the achievements made, discuss the efficiency of governments and the extent of their success in achieving the goals, and direct what is required to be achieved during the next year specifically, according to a specific time frame, responsibilities and goals, according to” We Are the Emirates 2031″, our way in the next ten years.. the first of the ten phased visions that support the achievement of the goals of our country’s centenary.”

See also  Save on city breaks, week-long holidays and more in the booking.com Black Friday sale

The annual meetings of the UAE government, on its second and final day, discussed several files of priority in the country’s comprehensive development process, including files of education, Emiratisation, the national economy, digital technology, cybersecurity, and other files that directly reflect on the reality and future of development in the country. The quality of life of the citizen and the UAE society, enhancing the competitiveness of the country in all sectors, and supporting the readiness of generations for the future.

Future directions in the education sector

His Excellency Abdullah bin Touq Al-Marri, Minister of Economy, and His Excellency Dr. Thani bin Ahmed Al-Zeyoudi, Minister of State for Foreign Trade, discussed the most important comprehensive economic partnership agreements for the UAE and what they represent for the state, and its pivotal and growing role affecting the efficiency, flexibility and strength of the national economy, and the most prominent elements and foundations of the state’s direction and plans. Economic during the next stage, and the most important features and objectives of economic and trade cooperation agreements with the countries of the world, in a way that supports the comprehensive development process of the UAE.

His Excellency Dr. Abdul Rahman bin Abdul Manan Al Awar, Minister of Human Resources and Emiratisation, and His Excellency Ghannam Butti Al Mazrouei, Secretary General of the Emirati Cadres Competitiveness Council “NAFES”, reviewed the latest government policies, mechanisms and strategies in the Emiratisation file, and the national goals achieved in it, and the reality and future of this basic and pivotal file in The developmental march of the Emirates, which receives great priority and follow-up by the wise leadership.

The digital economy and future technologies

His Excellency Omar bin Sultan Al Olama, Minister of State for Artificial Intelligence, Digital Economy and Remote Work Applications, addressed the most prominent efforts of the UAE and its vision in building a pioneering digital economy that combines distinguished skills with the latest advanced technology technologies to enhance opportunities for economic diversification, establish a prosperous economy based on future technologies, and invest the best opportunities that Provided by the permanent and continuous development in the digital world.

His Excellency Dr. Mohamed Hamad Al Kuwaiti, Chairman of the Cyber ​​Security Council of the UAE Government, discussed the role of the Council in maintaining cyber security in government work in light of the current challenges posed by cyber threats, the most prominent elements of achieving cyber security, and the importance of the cyber security system in achieving one of the goals of We the Emirates 2031. To be among the best 3 countries in the world in the cybersecurity index. His Excellency also reviewed the escalating cost of cyberattacks imposed on countries, companies and institutions, their effects on various sectors and state infrastructures, and the most important steps taken in the country to ensure the achievement of cybersecurity.

Accelerate the employment of university graduates

Among the closed side sessions, which were held during the second day of the annual meetings of the UAE government 2022, five different sessions discussed supporting mechanisms that ensure accelerating the entry of university and college graduates into the labor market, ways to double the number of citizens in new economic sectors, and mechanisms to support job opportunities for citizens in the legal sector. And legal advice and ways to support the retention of citizens employed in the private sector, and study government contracts with companies that meet the requirements of Emiratization.

The annual meetings of the UAE government are the largest national meeting of its kind and the inclusive national platform to unify government work as an integrated system at the federal and local levels, as it includes a number of specialized workshops, discussions and sessions aimed at strengthening the country’s leadership in all national indicators.

This annual national gathering issues an integrated system of important national and development outputs and initiatives that aim to serve the UAE community and achieve a quality of life in the UAE, in a way that empowers all segments of society and contributes to preparing national cadres aware of the requirements of the next stage.

“We Will All Come Back”: Soldier’s heartfelt message from Battlefield

FTSE 100 Live: easyJet in the red despite record summer quarter

ABOUT US
The Us Express News is your daily dose of Latest News, Entertainment, Music, Fashion, Lifestyle, World, Cricket, Sports, Politics, Tech, Business News Website. We provide you with the Latest Breaking News Straight from the United States & all around the World on different categories.
Contact us: theusexpressne[email protected]
FOLLOW US
© The Us Express News All Right Reserved
Go to mobile version