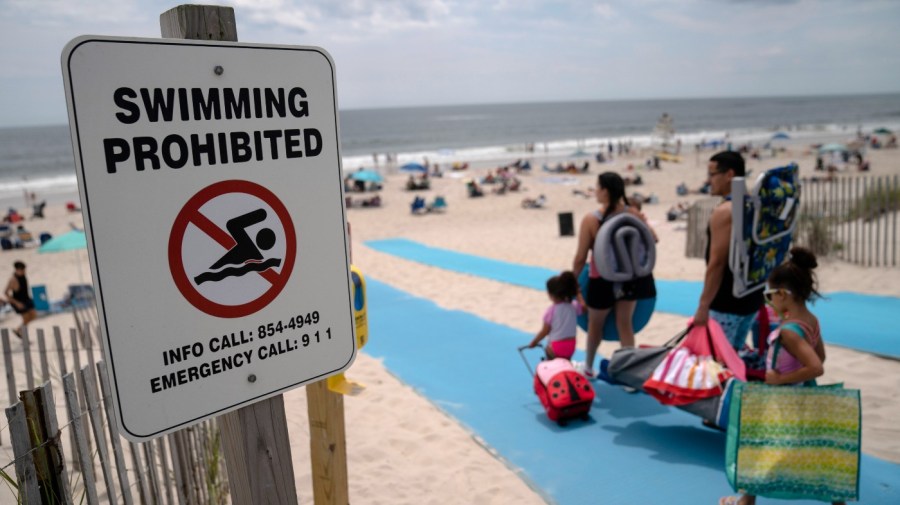 This week, swimmers were banned from entering the water at two Long Island beaches after three sharks were spotted offshore and beaches along Cape Cod were closed after 20 great white sharks swam off the shore.

Recent sightings show that the summer wave of shark activity along the east coast is not slowing down. This year, there have been 31 shark attacks in the United States, the majority in Florida. But this summer, more sharks are popping up in unexpected places like New York, where at least six people have been bitten while swimming.

Shark bites are extremely rare, making each bite a surprise, especially in states that have no history with the animal. According to the Florida Museum of Natural History and Florida International University’s Shark Attack File, there were only 12 unprovoked shark bites in New York’s history before 2022.

While the increase in shark sightings and bites is still not fully understood, marine biologists have a few ideas about why so many days at the beach have turned into a scene straight out of the movie “Jaws” this year.

Sharks are hunted for their meat, gill plates, fins and liver oil and have been overfished for decades, killing approximately 63 to 273 million sharks a year in the early 2000s. A study published last year found that oceanic shark and ray populations have declined by 71 percent since the 1970s due to overfishing.

This puts three-quarters of the shark and ray species in the ocean at risk of extinction, the study said.

But since the 1990s there have been shark conservation measures such as the shark sanctuaries, a ban on shark finning, efforts to reduce bycatch and better regulated fishing. And scientists have noticed that some shark populations are recovering.

“Maybe in some cases we’ll see evidence that some shark populations are starting to resurface.”

Their prey is flourishing this year

Shark biologist Greg Skomal, who works as a senior fisheries scientist with the Massachusetts Division of Marine Fisheries, believes sand tiger sharks are most likely the culprits behind recent bites off the coast of New York.

The typically docile species, equipped with several rows of fearsome serrated teeth, migrate northeast in the summer and feed on baitfish such as Atlantic menhaden, which may be thriving in part to better water quality this year. The New York State Office of Parks, Recreation and Historic Preservation has even captured footage of sharks chasing huge schools of fish around Jones Beach.

“A lot of bait fishing will lead to shark feeding close to shore and if you throw humans into the mix, there are probably record numbers this year for many reasons… you get the chance of a negative interaction,” Skomal told Changing America.

Sand tigers are a coastal species and spend their time in shallow waters along the shoreline. But they are known to get into bays and estuaries along the east coast and have been found in Delaware Bay as far as the Gulf of Maine.

Great whites, who primarily eat seals, are in a similar situation around Cape Cod, where seal populations have skyrocketed since federal protection of the animal in the 1970s.

Warming waters are forcing some sharks to migrate further north

Climate change could play a role in this. Scientists have some evidence that certain species of sharks migrate further north as their native waters warm. A study on tiger sharks published in January found that the species, which spend winters in Florida or the Bahamas and migrate north in summer, are expanding their geographic range.

Normally, the sharks don’t make it past Virginia when they try to reach cooler waters during the summer months, but the study shows they have expanded their seasonal range into southern New England. The same goes for bull sharks found in the waters off North Carolina and in Missouri and Illinois, as rising temperatures have forced them more inland. The kidneys of bull sharks can recycle saltwater, making them one of the few shark species that can survive in freshwater, according to National Geographic.

While the species seen around New York and Massachusetts aren’t those that scientists have noticed moving more north, but “overall, we’re seeing potential expansion northward,” Papastamatiou said. “So that could mean seeing more sharks going in the future.”

WHY PUT SOLAR PANELS ON THE WATER SURFACE?