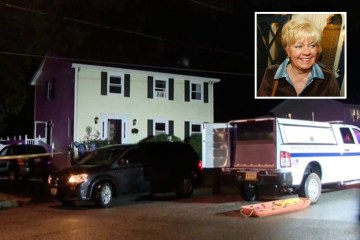 An eviscerated body was found in separate suitcases in an apartment in Brooklyn, New York, officials say.

Police made the gruesome find in Cypress Hills, the same neighborhood where another dismembered body was recently found.

On Wednesday, authorities entered the apartment after receiving a tip about the tenant, a woman in her 20s, as reported by The New York Post.

Once inside, officials found “a large amount of blood” and human remains.

Police have launched an investigation and are looking for a person of interest for questioning, according to the NYPD.

The identity of the victim has not been released.

Residents of the building told the Post that the woman who lives in the apartment has a boyfriend and they often argued.

Neighbor Kim Angeles, 24, told the outlet that the building inspector was the first to discover the human remains and called the police.

The discovery comes months after a head was found in the apartment of Harvey Marcelin, a convicted murderer.

The head belonged to a body discovered in a shopping cart a week earlier, according to The New York Times.

Marcelin, who spent more than 50 years of her life behind bars, was charged with hiding a human corpse in connection with the murder of Susan Leyden, 68.

Marcelin was allegedly caught on camera dumping human remains in her neighborhood, according to the New York Post.

When a search warrant was executed on Marcelin’s apartment, a human head was reportedly found.

Leyden’s torso was found a block from Marcelin’s apartment. It was reportedly in the same bag Leyden had brought and Marcelin was seen leaving her apartment.

Days later, the woman’s leg was found a few blocks away. Her arm is still missing.

The US Sun has contacted the NYPD for additional information about the body found Wednesday.