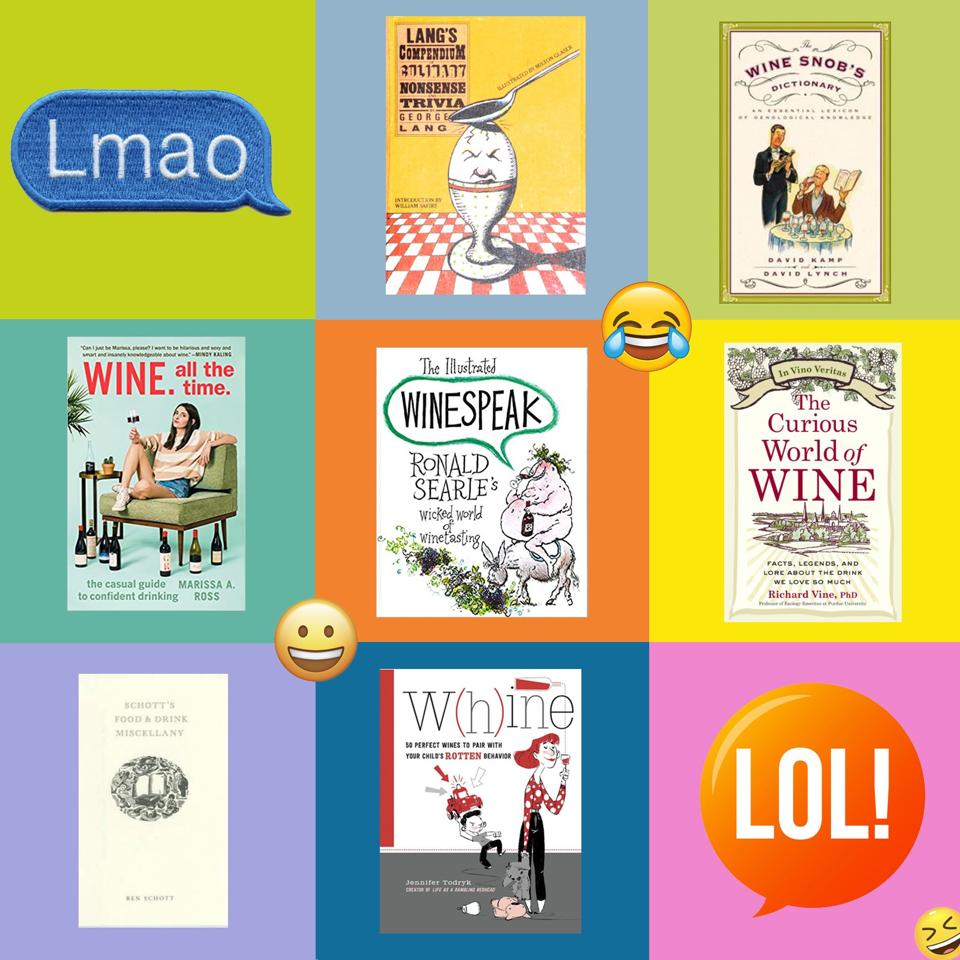 April won’t be the cruelest month if you have these humorous wine books handy.

Many literary people know that it is National Poetry Month but who knew it was also National humor month? Fortunately, I did. (MDR!)

Any wine writer worthy of his weight has heavy volumes on the subject – Jancis Robinson’s Wine grapes, the Oxford wine companion, Hugh Johnson’s World Wine Atlas and the newly updated Sotheby’s Wine Encyclopedia. But they probably also have some funny wine books because, well, folks, you have to relax!

Some of these are classics and some can be unique, but there are some for anyone who wants LOL, ROTFL, LMAO or, if you’re old-school, ha-ha or hee-hee.

Top of my list is the classic, The Illustrated Winespeak: Ronald Searle’s Wicked World of Winetasting (Souvenir-now Profile Press, 1992) Searle, a longtime New York cartoonist who was appointed a Member of the Order of the British Empire, associated wine tasting terms with cheeky illustrations poking fun at oenophile jargon such as than “distinctive nose”, full bodied “etc. First published in 1983, reissued in 92 and over the years you can still find copies online, worthy of a place on your or a friend’s shelf wine lover. Find.

Lang’s Compendium of Culinary Nonsense and Culinary Trivia by George Lang (Clarkson Potter, 1980) is prized for his illustrations by legendary graphic designer Milton Glaser (William Safire wrote the introduction). It is mainly focused on food, but the chapter titled “A Drunk by Any Other Name” is devoted to liquid pleasures. Find.

The Wine Snob dictionary: an essential lexicon of wine knowledge by David Kamp and David Lynch (Broadway, 2008) combines reality, pleasure and more than a little acid. Here, Robert Parker is an overlord of wine ratings, Paul Draper (Ridge) is a “professional winemaker” and importer Kermit Lynch is “the oenological counterpart of Chez Panisse Alice Waters”. Few of the others get a pass, even the land is treated underhand. Find.

The curious world of wine (Perigee / Penguin Press, 2012) by Richard Vine, Emeritus Professor of Oenology at Purdue University explores “the facts, legends and traditions” of wine. This little volume is a lot of fun for the nuggets and the very original stories that the fortuitously named author draws from Old and New World wines. Beautiful engravings throughout. Find.

Various foods and drinks from Schott by Ben Schott (Bloomsbury, 2004) has long been a favorite gift to give due to its compact elegance and appeal to almost anyone with a culinary inclination. The dense text is nicely laid out and I love the randomness of the entrees – from the latest meal requests to wine barrel sizes, to specs on martinis and olive oils and notable vegetarians (Benjamin Franklin!) Find.

Whine: 50 Perfect Wines To Go Along With Your Child’s Shitty Behavior (Race Point, 2017) by Jennifer Todryk. I love the honest premise of this book: the wine pairing for the accomplished parent. Claiming to ‘have the Pinot for your pain’ and the Syrah to get you out of a funk, this luckily stays away from the over-the-top ‘merlot mommy’ meme. Comes with stickers for W (h) ine’s periodic table to “help you determine if your child has behavior problems, attitude problems, or just bad TUSEN.” LOL on that. Find.

Wine. All the time: the relaxed guide to drinking with confidence by Marissa A. Ross (Plume, 2017). Ross, a former actress turned wine columnist for Bon Appetit magazine, also hosts the podcast “Natural Disasters With Marissa and Adam” in which she [refreshingly] asserts himself as the anti-wine expert. (The preamble to his website says, “I write and drink wine. I have no qualifications to write about drinking wine, other than the fact that I do it all the time.”) He borders so seriously. Find.

Absolute Corkers: A Book of Fun Facts and Stories for Wine Lovers by Ned Halley (gendarme, 2009). Offers a side view of the consumption, collection and marketing of wine. Some copies still available from third-party sellers on amazon.com.

Taste Like Purple: A Humorous Look At Tasting And Terms by Kristia Freeman (Wheatmark 2012). Demystifies wine and breaks down the basics for first-timers with a special note on how to deal with wine bullies. (Who me?)

Are you my wine ?: A parody of a children’s book for adults exploring the world of wine by Reese Ling (Ulysses, 2017). Illustrated in the style of children’s books, this is a fun parody on fancy wine lingo, as interpreted by fancy storybook animals.

Wine Life: A Snarky Adult Coloring Book (Blue Stationery 2017). One of a series of adult coloring books from this independent publisher, this one devoted to wine and moaning.