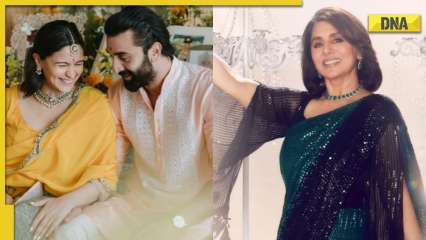 On Thursday, Bollywood actress Alia Bhatt took to Instagram and revealed the name of her and Ranbir Kapoor’s daughter. She not only announced her daughter’s name chosen by Neetu Kapoor but also revealed several meanings of it.

Alia Bhatt shared a blurry photo and wrote: “The name Raha (chosen by her wise and wonderful Dadi) has so many beautiful meanings… Raha, in its purest form means divine path in Swahili, she is joy, in Sanskrit is Raha a clan , In Bangla – tranquility, comfort, relief, in Arabic peace, it also means happiness, freedom and bliss. And true to her name, from the first moment we held her – we felt it ALL! Thanks Raha, for bringing our family to life, it feels like our life has just begun.”

Alia Bhatt and Ranbir Kapoor announced on November 6 that they became parents to a baby girl when they welcomed their first child at HN Reliance Hospital in South Mumbai.

In a joint statement, Alia Bhatt-Ranbir Kapoor stated: “And in the best news of our lives, our baby is here… and what a magical girl she is. We are officially bursting with love – blessed and obsessed PARENTS! love love love – Alia and Ranbir.

See also  Will Alia Bhatt's Daughter Act? 'Worried' mom has THIS to say

Respond to the news. Karan Johar wrote: “My heart is full of love….Welcome to the world baby…so much love is waiting for you…..Love you @aliaabhatt and RK!! To the moon and back! !!! So this makes me a proud Nana!!!!”

For the inexperienced, Alia hosted her own baby shower and shared some images on Instagram. Neetu Kapoor, Karisma Kapoor, Soni Razdan, Shaheen Bhatt, Mahesh Bhatt and Karan Johar, among others, attended the event with the couple’s close friends and relatives.

The power couple announced their pregnancy in June of this year. The Brahmastra couple exchanged vows in a private ceremony on April 14, 2022 at Ranbir’s residence in Mumbai after years of courtship. Two months after getting married, the couple presented such a wonderful surprise to their fans.

Shia LaBeouf and Mia Goth give rare glimpse of daughter at...

Elon Musk credits ‘The Simpsons’ for predicting his Twitter takeover