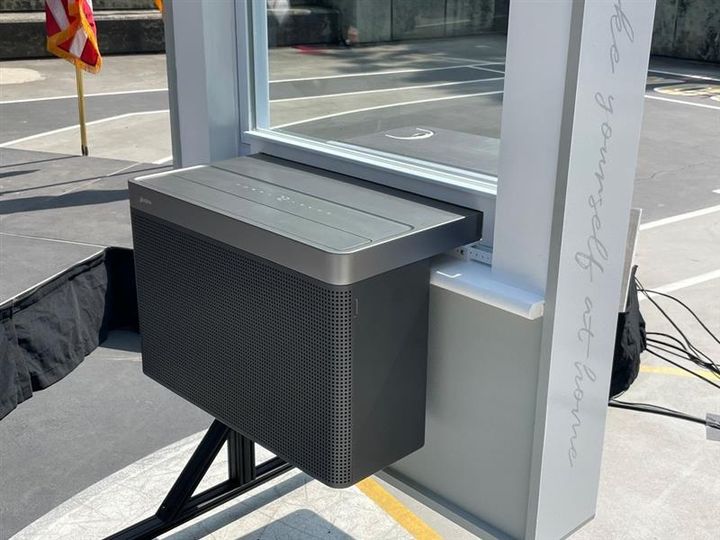 In 1993, when the new hit “Whoomp! There It Is” blared from boomboxes in the five boroughs, the New York City Housing Authority discovered a problem.

A highly efficient refrigerator, requiring almost 30% less electricity to keep groceries cool, had just come on the market. But the device was too big for the nearly 200,000 government-controlled apartments, which are home to nearly as many people as Wyoming.

So NYCHA and state energy officials made an offer to manufacturers: make an efficient refrigerator that would fit in an apartment, and we guarantee to buy at least 20,000 of them. The program proved to be a huge success and the winning manufacturer Maytag eventually produced a device that transformed the market.

NYCHA wants to do that again. But this time, the device in question aims to regulate the temperature of the entire house, not just the groceries.

The housing authority announced this week that it would plan to develop and purchase efficient, sleek new heat pumps for a pilot program.

Heat pumps are essentially two-way air conditioners and are widely seen as the most efficient and practical way to heat buildings without fossil fuels. As hardware improvements make heat pumps more versatile and reliable than ever before, policymakers are trying to roll them out as quickly as possible, especially as high fuel prices threaten to make keeping warm this winter expensive. But heat pumps remain expensive to buy and install, and many on the market are designed for single-family homes, not compact apartments.

Once she grasped that challenge, Vlada Kenniff, NYCHA’s senior vice president of sustainability, said she immediately thought back to the refrigerator effort in the 1990s.

“We found a lot of the people who worked on the original refrigerator program in the 1990s and really tried to understand how that was put together,” she said in an interview this week. “Very early in this project, we talked to those program managers to understand what the size of the golden root is, how to grab the attention of manufacturers, so that it’s worth opening their specs and a mass-scale product that did not exist before?”

Before bidding last year, Kenniff spoke to other public housing authorities in the state and country, receiving letters of support expressing interest in purchasing heat pumps arising from NYCHA’s proposal. It all came together quickly.

The devices are compact and saddle the windowsill, meaning they don’t block half of the window the way traditional air conditioners normally do.

NYCHA plans to run a pilot program for a year before placing the full order for all 30,000. Assuming there are no major problems, Kenniff said installations should begin in 2025.

“This has taught us that we can be an anchor market in many other innovations,” she said. “We hope this is one of many. We got this one right.”

For many, a new way of heating couldn’t come soon enough. Virtually all of NYCHA’s buildings are heated with radiators connected to gas-fired Scottish marine boilers, with fuel oil as a backup.

In the late 1910s, New York City underwent a heating revolution. As the Spanish flu raged, the densely populated, fast-growing immigrant center designed its buildings’ radiator systems to run so hot that residents could keep windows open, creating an airflow that could slow the spread of the pandemic.

The fuel used to make the steam has changed over the past century, but that system remains in much of the city’s older housing stock, even if it takes tenants control of when the heating comes on.

Born in the 1930s out of the federal government’s response to the Great Depression, NYCHA struggled for the past three decades as Clinton-era deregulation attempted to push public housing tenants back into the private market. Mold, cockroaches and lead paint have regularly made residents sick and the radiators are often cold in frigid temperatures. Internal emails in 2015 revealed NYCHA had deliberately turned off the heating during frigid winter nights, despite complaints. In one instance, The New York Times found that NYCHA residents lived without any working heating for 10 years.

The neglect and mismanagement led to a federal investigation, which resulted in a agreement 2019 with the Ministry of Housing and Urban Development to solve numerous problems, including heating.

Progress is slow. In just one housing project in the Bronx in 2018, the heating went out 66 times during the colder months and 50 times over the next two years, NY1 reported. More than 7,000 NYCHA residents lost heat and hot water during a cold snap in 2021.

“I turned on the oven, pots of water,” Nichelle Thompson, 53, a grandmother in a Manhattan housing project, told the broadcaster Pix11 last year. “I stay up all night because of the fumes. It’s not good for us.”

Improvised heating can quickly become deadly. Last January, a stove caused a fire that killed 17 at a private high-rise building in the South Bronx.

Heat pumps may not be a panacea. Sean Brennan, director of research at the nonprofit Urban Green Council for sustainable building, Grist . told earlier this year that if NYCHA didn’t combine its heat pumps with better insulation, the window units may not keep the apartments as warm as the old radiators.

Kenniff said such concerns were why NYCHA would conduct testing before the full heat pump order was placed.

“We want to make sure our residents feel comfortable and like them, and make sure they work with our window configurations and space constraints in the apartments,” she said. “We want to get through at least one heating season before we say all the boxes are ticked.”

The plan then, Kenniff said, would be to buy and deploy more, and phase out the gas and oil-fired boiler systems that heat most NYCHA buildings. That will be a bigger step. NYCHA already has gas-fired generators in facilities that lost power during Superstorm Sandy in 2012. Kenniff said she hopes NYCHA can eventually replace those too with batteries and solar panels that can keep the lights and heat pumps on even if the power goes out.

Electricity prices in New York City are much higher than the national average, due to the state’s heavy reliance on fossil fuels and a market system that has failed to provide sufficient incentives for the infrastructure needed to keep pace. keep up with the growing demand of the metropolis. That has made electric heating unappealing to many homeowners, who prefer the gas stoves or oil boilers to which they are accustomed.

State-level government incentives, such as discounts of up to $10,000, are already beginning to tip the scales in favor of installing heat pumps. If the huge climate spending deal Democrats negotiated last week becomes law, homeowners who buy a heat pump could claim a new federal tax credit of up to $2,000.

For low-income NYCHA residents who don’t pay utility bills, that’s not much of a problem. But if those incentives spur a boom in heat pump installations around New York, NYCHA residents could benefit. The agency said it plans to train and hire residents to help install heat pumps, giving the experience the potential to lead to new careers.

“NYCHA is undergoing a transformation and we want to get it right,” said Kenniff. “As part of the process, we want to provide our residents with the opportunities that will ultimately be created by that transformation, be it an education or a job. I think that’s the key to everything.”