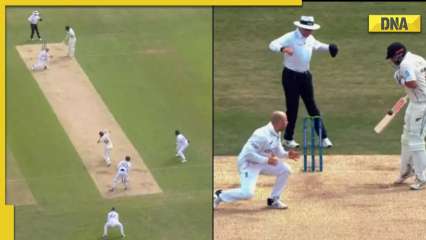 This isn’t the first time and it surely won’t be the last time the game of cricket will see a bizarre dismissal take place. In the ongoing third and final Test between New Zealand and England at Headingley, something bizarre happened on the first day.

Apparently Kiwi batter Henry Nicholls was dismissed in one of the weirdest ways possible and England bowler Jack Leach celebrated the wicket.

Could be called one of the unluckiest dismissals, Nicholls went off after the ball deflected off his own teammate’s bat and flew into the defender’s hands. Nicholls had attempted a straight run into the park, however, the ball flew towards teammate Daryl Mitchell who was on the non-attacking side.

Seeing the ball rushing in his direction, Mitchell responded by walking away, but the ball hit his bat and it flew in the direction of Alex Lees who was parked halfway. Shortly after, Nicholls was knocked out and his 19-point inning ended.

So was this dismissal legal?

Shortly after the video went viral, many wondered if the outing was within the rules. Marylebone Cricket Club (MCC) quickly took to Twitter to clarify the rules.

They stated the law regarding the incident and wrote. “Unfortunate dismissal? Yes. But totally within the law. Law 33.2.2.3 states that it will be taken off if a defensive player catches the ball after it has touched the wicket, a referee, another defensive player, a runner or the other batter.”

An unfortunate dismissal? Yes. But entirely within the Laws.

Rule 33.2.2.3 states that it will be out if a fielder catches the ball after it has touched the wicket, umpire, another fielder, runner, or the other batter.

Speaking of the matchup, Nicholls had 19 points to his name after facing 99 balls. He was the last Kiwi batter who was returned to the clubhouse Thursday by the hosts.

After his departure, the in-form duo of versatile Daryl Mitchell (78 not on 159 balls) and wicketkeeper Tom Blundell (undefeated 45 on 108 balls) made sure to keep the points on the board as they added 102 runs for the sixth wicket.