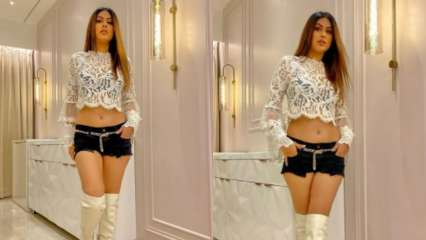 The latest video of actress Nia Sharma that the diva shared on her Instagram account on Wednesday has gone viral on the internet. Building on the success of her recent “Do Ghoonth” music video, party-loving Nia Sharma shared a music video with her gang leaving her hair down and showing off her killer dance moves to catchy tracks.

In the now viral video, Nia Sharma is seen dancing at a club accompanied by her friends who seem equally overjoyed. Nia’s electrifying movements and energy totally grabbed the attention of internet users. Some fans took to the comments section to even ask where did she get all this energy from? “Where did you get so much energy from,” one Instagram user asked. Others left heart and fire emojis in the comments section enjoying Nia’s fabulous dance moves.

In the video, the actress was seen in a white lace crop top paired with black shorts and white thigh high boots. The gang is seen playing in the footsteps of Sukhwinder’s hit song, “Taare Gin Gin”.

Earlier, Nia Sharma shared a few photos on Instagram giving a glimpse of the same look she was seen at the club with her gang. Take a look at the pictures here:

Meanwhile, speaking to radio host Siddharth Kannan, Nia Sharma revealed that she previously had a reunion for a role in ‘Manikarnika: The Queen of Jhansi’. However, she called the meeting unpleasant and a waste of time and said she wouldn’t want to walk into a director’s or producer’s office and be underestimated because she’s from the industry. from television.

“Manikarnika ke liye ek meeting thi itna sa role ke liye (there was a meeting for a small role in Manikarnika). It was a stupid conversation. I didn’t go back. Kuch faayda nahi tha uss conversation ka ( It wasn’t a worthwhile conversation, it was a waste of time, and then he said, “You look so sexy.”