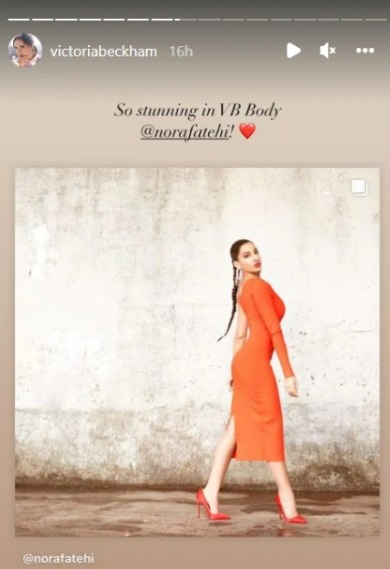 Victoria Beckham recently hailed Nora Fatehi. The former pop singer who is now a fashion designer uploaded a photo of Nora wearing one of her models and raved about her beauty. For her appearance on the reality TV series Dance Deewane Juniors, where she works as a judge, Nora donned the outfit.

See also  Neve Campbell out of 'Scream 6' over pay dispute: 'Doesn't equal the value I brought to the franchise'

She wore a bright orange bodycon dress with a slit and accessorized it with pointy heels, striking makeup and a long, sleek braid. In the Instagram caption, she provided more information about her outfit and credited Victoria as the designer of the dress. Victoria also left a note on Nora’s post with three red heart emojis.

Along with Neetu Kapoor and Marzi Pestonji, Nora co-judges Dance Deewane Juniors. With Dirty Little Secret, her third song as a singer, she recently made her directorial debut.

With the 2014 release of Roar: Tigers of the Sundarbans, Nora Fatehi made her film debut in Bollywood. She then made appearances in a number of well-known songs including Kusu Kusu (Satyameva Jayate 2), Kamariya (Stree), Ek Toh Kum Zindagani (Marjaavaan) and Dilbar (Satyameva Jayate). Additionally, she co-starred in Bhuj: The Pride of India with Ajay Devgn and Sonakshi Sinha as well as Street Dancer 3D with Varun Dhawan and Shraddha Kapoor.

Matt Agnew gorges on pastries in Paris: “It belongs to OnlyFans”