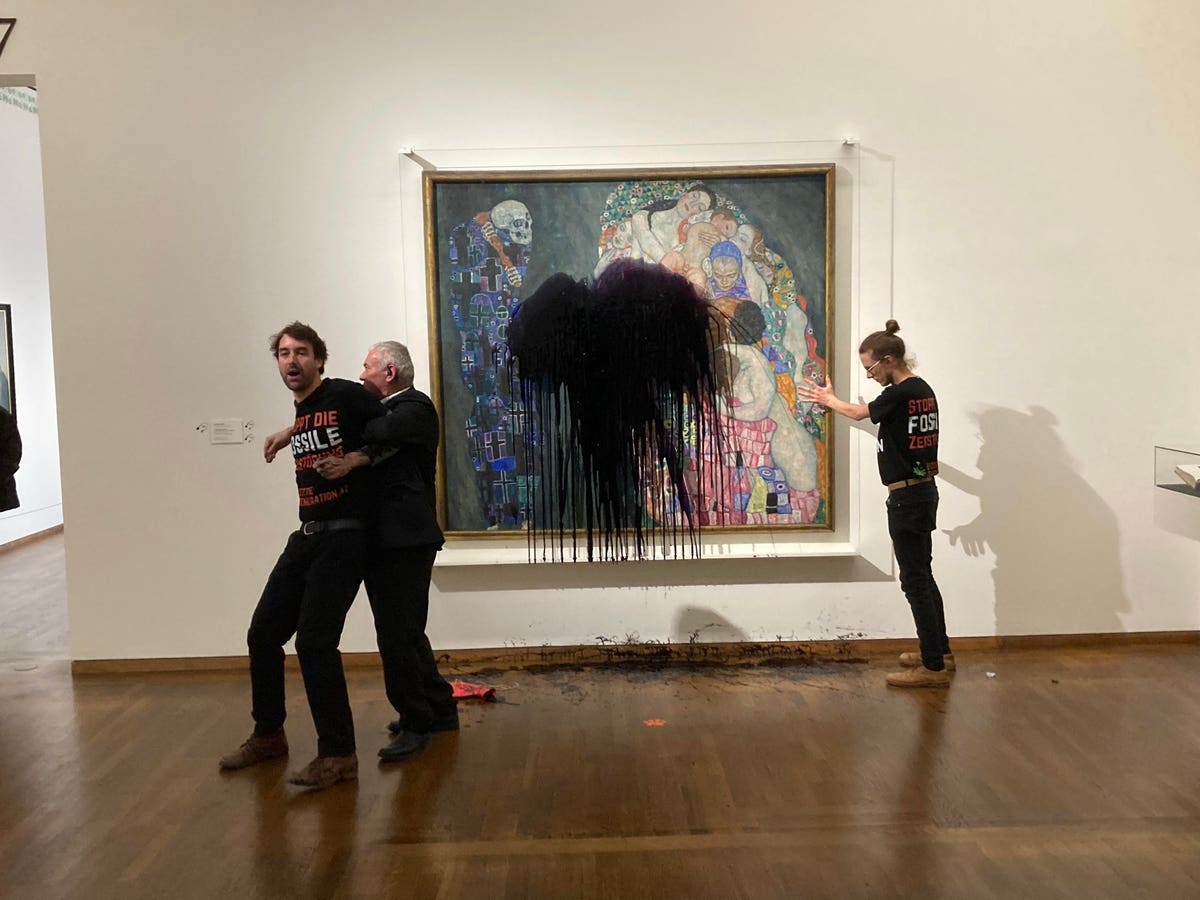 November 15 2022 was St. Leopold’s Day in Vienna. It is an annual holiday in Austria, intended to commemorate the death of Austria’s Prince Leopold on the same date in 1136. True to tradition, there is joy and life, and the Leopold Museum is free for guests. Lorenz Trattner and Florian Wagner of Letzte Generation walked between them – the latter carrying a hot water bottle filled with black liquid, hidden as a belly under a thick white sweater.

The museum event was sponsored by OMV, an oil and gas company. The activists chose this date for their protest because OMV continues to drill for new oil, also locally. They believe it is unsustainable.

Death and life — Tod and Leben. It is not a dramatic expression of the Letzte Generation activists shouting through the streets of Austria, but the name of Gustav Klimt’s painting of 1911. This work suited the time of Saint Leopold, always flowing in the continuous cycle.

Klimt had previously explored the theme in Tree of life from 1909, but this painting took on a new macabre character. He later painted about the Death and life in 1915 to enhance the gloomy tones, cover gold leaf and even slip on the frame designed by Josef Hoffman. This change was not considered harm, but rather was a message of pathos and desperation.

Florian Wagner was unaware of the painting’s more detailed backstory Death and life, but he knew it had great power, and the title said it all. At the age of 30, he began his career studying agriculture and working on large German farms, then pursued a master’s degree in political economy to focus on climate change.

Wagner felt privileged to benefit from the tangible experience of the land and the abstract education on carbon emissions and greenhouse gases. He became active in democratic groups, founded initiatives and acted as a board member at Mehr Demokratie Österreich. He petitioned, campaigned and demonstrated… all to no avail.

“I always thought we should develop democracy and then people could vote for what they believed in, and things would get better,” Wagner said before adding a sad laugh. “But then I saw that, well, there’s just no more time.”

His optimism was waning.

“I kind of realized it was an illusion and a lot of mistakes were made,” he continued. “…We have seen what has happened over the past three decades, and people are not doing anything. Everyone knows it’s a problem and it’s not happening.”

The demonstration for the Klimt painting was more about reaching people. The many splashes of paint over the past few months seem calibrated. From mashed potatoes on a Monet painting in London’s National Gallery to tomato soup on a Van Gogh by Just Stop Oil activists Phoebe Plummer and Anna Holland, it seems these incidents won’t stop until their message is heard and their demands met met.

Wagner practiced tirelessly for what he saw as a staged incident, a performance, as a way of effectively reaching people. He knew there was a four-inch gap between the painting and the protective class. He tossed the liquid into his shower six times to make sure he wouldn’t miss and accidentally damage other works, while rehearsing his diction with a theater-study friend, writing the thoughtful sentences:

We’ve known about the problem for 50 years and yet global emissions are higher than ever. We are heading for an irreversible tipping point in Earth’s climate system. This will lead to heat waves and droughts. Agriculture will no longer function.

At this point he was careful to throw from the left to avoid splashing the other paintings. But when it came to his well-articulated speech, he choked, repeating the first line somewhat hysterically over and over, and freestyled as the guard did what Wagner called “a little dance.”

“The planet will be destroyed! Stop drilling! The climate will be in a hole!”

Ambulance personnel and police stormed into the room. In a later Q&A with museum director Hans-Peter Wipplinger for Falter.at, the professional disparaged the act and unequivocally called it an attack. Ukrainian children recently displaced by war were present and he felt they had been re-traumatised. The museum subsequently received more intense threats of damage from other organizations, and Wipplinger feared that the next attack would cause irreversible damage and loss to the collection.

As often repeated by art world professionals, there had to be a better way.

“In terms of content, we’re not that different,” Wipplinger told Wagner in the German-language newspaper, “that’s why we’re definitely the wrong target.”

But where Plummer and Holland passed on the suffragettes, Wagner thought of Arnulf Rainer’s The great composers, in which the Viennese artist would obscure images of Johannes Sebastian Bach, Ludwig van Beethoven, Wolfang Amadeus Mozart, and others for shock value. He even painted over pictures of himself. The meaning was the message. If you can’t shock people, how else can you reach them?

As was the case for Britain’s Just Stop Oil activists, the debate continues over the true fiscal value of the perceived damage. Trattner and Wagner tried not to damage the painting, and despite the mess, nothing was deliberately damaged. But Wipplinger pointed to the insurance value of the work, which suddenly jumped from 60 to 140 million euros. The museum director claimed that the institution would no longer be able to afford the work and that the damage was fiscal rather than literal.

This raises the interesting question of valuation, but also of the secondary market. Because wealthier collectors have the financial resources to step into and “save” museums, the curators and believers in public access are often beholden to the ultra-wealthy and unsavory characters. In this case, the need for OMV’s involvement with the Leopold Museum may have been cyclical. Where there is life there is death.

Originally titled “Death” when it was exhibited at an international exhibition of art in Rome, Klimt’s painting received a gold medal and was subsequently renamed to add “Life”.

On the “life” side of the painting, there is much joy. Fresh faces of the young and vital, including a mother and beautiful nude, all indicate a sense of optimism and hope. After all, life is the end of the story, not the beginning.

During the 1915 adaptation, Klimt also added new figures to the Life section, making the divide between the two worlds more vivid and hopeful. Given that he passed away just three years later in 1918, perhaps editing the painting was a moment of remembrance of a life well lived – a chance to say goodbye.

For Wagner, the optimism lost in traditional activism and intent has been renewed through his newfound connection to the painting. He saw Klimt as a social reformer whose revolutionary artistry in the Art Nouveau movement was a break from traditional styles.

“If you know Klimt, you know that he has been a social reformer and that he is part of the Wiener Moderne group. These people are always trying to change the fundamental values ​​in society,” said Wagner. “I think that’s the real value of art, to bring something new into play, to get a new handle on fundamental values ​​and to visualize them for people to see.”

For Wagner, the message was temporarily lost in the throes of collectors.

“He’s obligated to represent this insane art market thing where people are just trying to own an asset to save their wealth, not their profit. As for the real value of art, being an innovative force for society, I don’t see the museum contributing to that.”

If nothing else, at least a dialogue has started.

“If the discussion escalates, it can no longer be ignored,” Wanger concluded with renewed optimism that his journey began a decade ago. “I believe that more and more people will understand the dimension of this crisis. That is my hope.”

Festive hotels in London: it’s starting to look more and more like Christmas

Where to eat in New York City on Christmas Eve