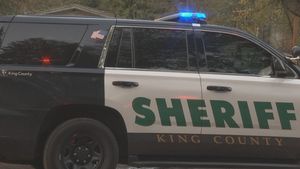 A murder investigation is underway following an overnight shooting in Renton.

Shortly after 1:45 a.m. Wednesday, the King County Sheriff’s Office received a 911 call from someone reporting that gunshots had been fired near the Southeast 15,000 block of 177th Place.

That location is near the apartment complex The Carriages at Fairwood Downs, according to Google Maps.

No information has been released about the victim, possible suspects or what led up to the shooting.