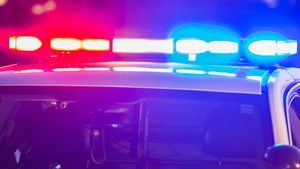 A Pine Township man is accused of attacking a woman with an ax in her home.

According to our partners at TribLIVE.com, video from a home camera showed the suspect, 53-year-old Lee Michael Swat, carrying the weapon down the stairs after the incident.

According to court documents, on Jan. 2, officers responded to a phone call from the alleged victim about an attack that had taken place the night before.

Our partners at the Trib said she told the police that Swat attacked her with an ax sometime in the night. The attack caused a cut on her calf. She also had a bruise above her left eye.

The woman told police that Swat grabbed her by the throat and pressed against her airways. She was treated on the spot by doctors, but refused to go to the hospital.

Police found blood on a blanket and on the carpet in the bedroom where she was attacked.

During a taped phone conversation with detectives, Swat denied the attack. However, he stopped answering questions after police told him they had video of him carrying the gun down the stairs, court documents show.

Swat is charged with aggravated assault, strangulation and simple assault.

He was released from the Allegheny County Jail after his $5,000 bail was posted. He will appear in court on February 8 for his preliminary hearing.