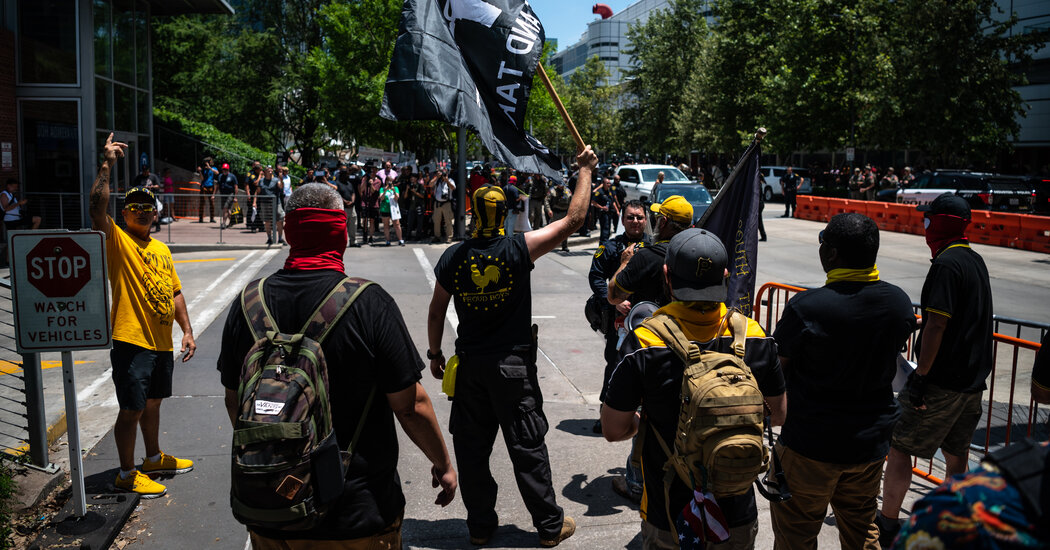 Over the past year, the Justice Department and the House Select Committee on Jan. 6 have largely succeeded in avoiding interfering with each other, even as the two have driven hard and fast on the same ground looking for the facts about the mob. the Capitol attack last year and what led up to it.

But in recent days, in a sign of growing tension, the parallel investigations have clashed as defense lawyers and prosecutors in one of the most important criminal cases – the Proud Boys sedition case – have come to to a rare point of agreement: that committee efforts cause headaches in the normal course of an orderly prosecution.

At a hearing on Wednesday in federal district court in Washington, the two opposing sides joined forces to ask a judge to allow some breathing space between the case and the committee’s work and delay the marquee trial. which was to begin in August.

Judge Timothy J. Kelly ultimately granted the request, saying the Proud Boys’ trial will now begin in December. As part of his ruling, Justice Kelly noted the committee’s role in the delay.

“All parties before me believe that the trial should continue because of the committee’s activities on January 6,” Judge Kelly said. He pointed out that although one of the Proud Boys’ defendants – Enrique Tarrio, the group’s former leader – objected to the delay, postponing the trial was “the first thing that all parties in this case discussed. agreed”.

It was perhaps inevitable that tensions would arise between the two investigations that are being conducted at the same time, along similar investigative lines, by separate branches of government.

The Justice Department has sparred with the committee in recent weeks over access to transcripts of interviews the House panel conducted, with the committee signaling it may begin sharing some documents with federal prosecutors. next month while withholding further documents until his investigation concludes in September.

The themes of the January 6 House committee hearings

But the Proud Boys case is the first of more than 820 criminal cases related to the Capitol attack in which the competing interests of the House committee and the Justice Department have become a legal issue.

From the start, the two investigations had different objectives and were guided by different rules.

According to the panel’s own testimony, the committee’s investigation was intended to explore as fully as possible the roots of the violence on Capitol Hill, and it ultimately aims to propose legislation to prevent something similar from happening again. His investigators have been given a relatively free hand in subpoenaing cases and witnesses, even though dozens of people — especially those close to former President Donald J. Trump — have refused to comply with his demands.

The Justice Department, on the other hand, has a narrower, if not potentially more consequential, goal: to determine whether anyone connected to the Capitol attack or Mr. Trump’s various efforts to overturn the election should be charged with federal crimes. . Its investigators are bound by rules that require high standards of proof to be met before they can even begin collecting evidence.

Trouble in the Proud Boys case began this month, immediately after prosecutors filed seditious conspiracy charges against five prominent members of the far-right group. The charges came at a very difficult time: just three days before the House committee was to hold its much-anticipated first public hearing.

As the hearing focused on the Proud Boys’ role in the Capitol attack, the group’s lawyers became furious, quickly claiming in hearings and documents that the Justice Department colluded. with the committee to draw attention to its findings.

“No objective observer would deny the reasonableness of the inference that the filing of the sedition charges was timed to coincide with the prime-time select committee hearing on television regarding the same subject,” the report wrote. one of the Proud Boys’ lawyers.

The Proud Boys also argued that the heavily watched hearings, which have been going on all month and are expected to continue in July, have irreparably biased the jury in Washington — or, as one of their attorneys put it in a recent file, the “Good, Well-meaning, Informed, and Media-Aware Citizens of the District of Columbia.”

Prosecutors denied coordinating their charges to coincide with the committee’s public hearings and argued that potential jurors in Washington are no more likely to have watched the events on TV than those in Miami or New York.

Yet another sticking point has emerged between the House committee and the Justice Department: the question of when the panel plans to release up to 1,000 transcripts of interviews conducted with its witnesses.

The committee suggested making the transcripts public as early as July, after initially announcing they could be released in September. But those two dates have upset lawyers for the Proud Boys who, ahead of Wednesday’s hearing, told Judge Kelly they were concerned about the release of the transcripts and the bias of a jury as their trial approached.

Lawyers are also concerned that new details about their clients could appear in the transcripts, which could further inflame a jury or harm their defenses. At least two Proud Boys linked to the criminal proceedings gave interviews to the committee: Mr. Tarrio, who has been charged with seditious conspiracy, and Jeremy Bertino, who is mentioned in court documents but who is not currently charged. .

The government, for its own reasons, also became concerned about what the transcripts might contain, and last week prosecutors filed court documents in the Proud Boys case, which included a letter that the Justice Department sent to committee staff.

In the two-page letter, department officials accused the panel of hindering both future criminal cases and cases already underway by refusing to share transcripts. Officials said they were particularly concerned that by withholding transcripts, the committee would make it harder for prosecutors to assess the credibility of witnesses who could have both spoken at the panel and appeared secretly before a grand jury.