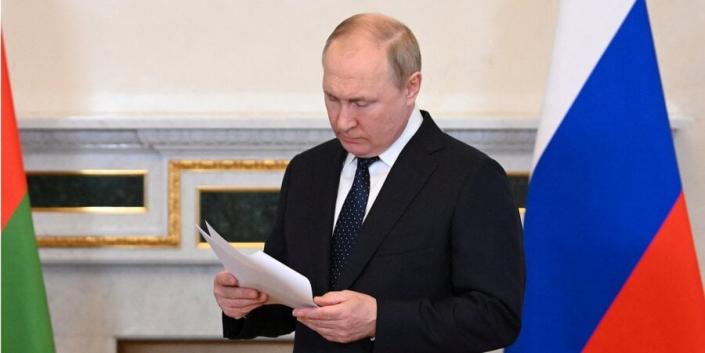 Although a month has passed since the publication of the well-known investigative article from The Wall Street Journal about the lying system that has formed around the President of the Russian Federation, I still can’t get it out of my head. Despite having long been familiar with the effects that led to the creation of this system, I could never have imagined that in real life things could take on such magnitude and have such catastrophic consequences.

For those unfamiliar with the materials of this study, I will briefly explain what it was about. So, as it turned out, a very warped system has formed around Putin, which informs him about the state of affairs in the country and beyond. It reminds me of the echo chamber effect known to social network researchers. As you know, [social media] algorithms, recognizing the interests of the user, start sending them information that they are likely to like. In addition, the user can choose independently from which sources he receives information and with whom he maintains contacts. When we prefer people who are like us, who share our opinion and who support us, they become our environment.

As a result, the risk of ending up in a virtual echo chamber increases: we begin to receive only the information we like, and all our posts, shares or comments receive approval and support from the like-minded people around us with. As a result, even rather dubious ideas and beliefs are approved by this environment, strengthening our belief of their truth. So, as investigative journalists found out, a similar system (not virtual, but real) has formed around Putin, and the image of the world that formed in his head thanks to this system forced him to go to war against Ukraine.

In Putin’s mythology, the main enemy is the West – not Ukraine

This system is sensitive to his ideas and wishes, so whatever painful or far-fetched thought enters his mind, it gradually begins to receive confirmation thanks to people who send him supportive information. Putin is an all-powerful dictator and subordinates want to please him because their income, positions, etc depend on him. Therefore, they give him the information he wants to hear and seek confirmation of the ideas he considers correct. Journalists collected a lot of evidence about how diplomats sent him stories about their victories on the diplomatic front, servicemen – about the excellent combat readiness of the “second army of the world”, and Ukrainian traitors (Medvedchuk is mentioned in the article) – about the readiness of Ukrainians to meet the Russian army with flowers.

See also  NHS strike dates: when are the next nursing interruptions and which areas will be affected

In addition, all this “pink” information that comes “from below” passes through the sieve of his immediate environment, which ultimately forms the image of reality desired for him.

Analysts have long suspected the existence of such a system, they just had no idea of ​​its size. A few years ago, the world was exposed to the embarrassment that befell the Kremlin ruler when he showed American director Oliver Stone footage of the alleged destruction of Syrian militants by a Russian helicopter. In fact, it turned out, it was footage of the U.S. elimination of Afghan militants filmed several years earlier. Of course, Putin’s press secretary denied everything and stated that the Defense Ministry had provided the president with these images, notably personally through Minister Shoigu.

Then everyone acted puzzled and suggested a version of what actually happened. Now it seems that this was one of Peskov’s few truthful answers. It seems that this is exactly how the Russian state machine works: regularly reporting on its successes and backing them up with fabricated evidence. So when Putin talks today about Russia being at war with NATO, Ukraine being ruled by Nazis and the war going according to plan, it’s quite possible that he honestly believes that because it’s based on the “facts” . ‘ that are systematically delivered to him by the disinformation system in which he lives.

My confusion after reading this article is not only caused by the magnitude of what is described (I suspect similar systems existed around many tyrants and dictators). The point is that I do not understand how this system can be destroyed (unless, of course, we take into account the physical elimination of Putin and his entourage).

Read also: The fear of the West is diminishing. But what is Putin capable of now?

Researchers who study such echo chambers cite the main reason for their formation as a long-known tendency of the human mind called confirmation bias. It is an unconscious bias inherent in all of us to seek and interpret information in such a way that it supports our point of view. For example, if we want to start a particular project, our head will automatically prioritize information that will confirm and downplay its success or even ignore evidence to the contrary. So the typical advice given to combat this bias (ask a neutral person to look at the problem, use the “devil’s advocate”, become your own critic) is expected to make the decision maker or someone around him to overcome this prejudice. , so he invokes the mentioned methods.

However, this does not apply to Putin or his entourage. They don’t need an objective view of the world. In objective reality, they are criminals and losers who have turned all of civilized humanity against them. But in the information bubble they have created, they are freedom fighters of the free world with good jobs and good salaries. Therefore, they have no reason to destroy this system.

So if “Putin’s camera” continues to work well, I see two main scenarios of how events will unfold.

First, the Russian dictator will continue to receive distorted information and draw false conclusions from it, which will most likely eventually lead to the defeat of Moscow.

In the second scenario, despite the emergence of an incorrect worldview, the Russian state will continue to function relatively effectively, stopping only where we and our allies can stop it. Indeed, the distorted view of reality led by Putin and his entourage does not necessarily lead them to a swift and inevitable defeat. We can find many examples in history of how organizations guided by various mythological ideas and a distorted view of reality achieved their goals. Many states and empires owe their origins to mythological worldviews. The evolutionary advantage was gained not by those groups of people who were guided by a worldview that most accurately reflected reality, but by those whose worldview, which is moderately objective, successfully united people into these groups and motivated them to work together . If the mythological worldview is capable of it, it can lead to success for those who accept it.

Therefore, looking at the absurd beliefs and beliefs of the Russian leadership, we should not expect that they will inevitably collapse. Unfortunately, as much as logic, science and progress-oriented people would like it, such a scenario is not inevitable. Likewise, our allies must not rely on logic in their interactions with the Russian leadership. Our Western partners are trying to establish a rational interaction schedule with Moscow, not taking certain steps to avoid escalation. According to this scheme, they do not transfer certain types of weapons to Ukraine, or transfer them only after appropriate actions by Moscow, etc.

All of this resembles some kind of smart strategy game, which is based on good logic and the assumption that one side understands and accepts this logic. However, our partners must realize that in the ideological chamber in which Putin lives, he is not guided by logic: he creates it. Therefore, the culprits will be those whom his flawed logic assumes are guilty. On this occasion it is worth recalling that in Putin’s mythology the main enemy is the West – not Ukraine. So, looking at what he is doing in Ukraine, it is not difficult to imagine what he will be capable of, God forbid, crossing the borders of the European Union.

If you remember the role the Reichstag plays in the holy Russian worldview, you can roughly imagine how far it will be willing to go. Therefore, there is no need to hide from reality behind the screen of mythology. Unfortunately, there are already enough leaders in the world who are far removed from reality.

Read the original article on The New Voice of Ukraine