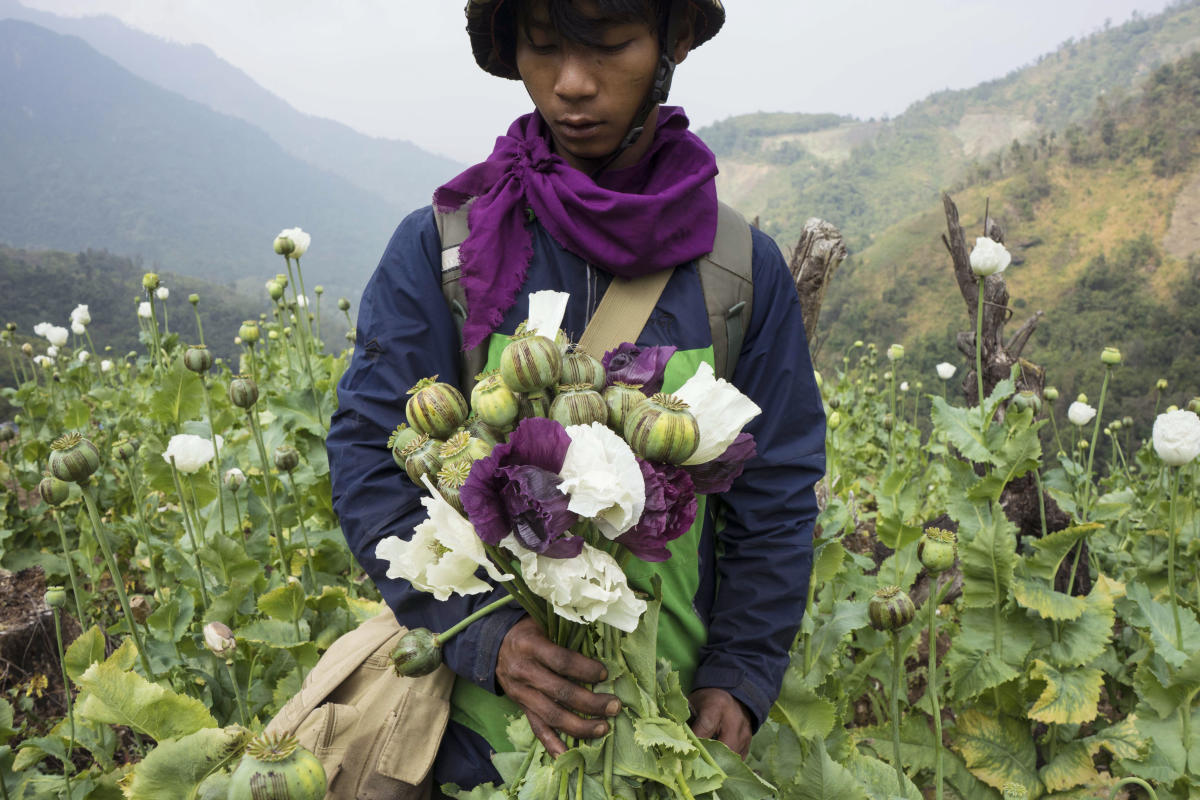 BANGKOK (TUSEN) — Opium production in Myanmar has been booming since the military takeover. Poppy cultivation has increased by a third in the past year as eradication efforts have eased and the faltering economy has led more people to the drug trade, according to a United Nations report released Thursday.

In 2022, in the first full growing season since the military wrested control of the land from the democratically elected government of Aung San Suu Kyi in 2021, Myanmar saw a 33% increase in cultivated area to 40,100 hectares (99,090 acres), according to the report of the United Nations Office on Drugs and Crime.

“The economic, security and governance disruptions that followed the February 2021 military takeover have converged, and farmers in remote, often conflict-prone areas of northern Shan and border states had little choice but to return to opium,” the UN said. -desk. regional representative Jeremy Douglas.

The total value of Myanmar’s opiate economy, based on UN estimates, ranges between $660 million and $2 billion, depending on how much was sold locally and how much of the raw opium was processed into heroin or other drugs.

“Virtually all of the heroin reported in East and Southeast Asia and Australia originates from Myanmar, and the country remains the world’s second-largest opium and heroin producer after Afghanistan,” Douglas said. “Right now the two cannot be compared as Afghanistan is still producing much more, but the expansion that is underway in Myanmar should not be dismissed and needs attention as it is likely to continue – it is directly related to the security and economic situation we see unfolding today.”

The so-called Golden Triangle area, where the borders of Myanmar, Laos and Thailand meet, has traditionally been an important production area for opium and was home to many of the laboratories that turned it into heroin. Decades of political instability have left Myanmar’s border regions, also known as Burma, largely lawless and exploited by drug producers and traffickers.

Most of the opium exported by Myanmar goes to China and Vietnam, while heroin goes to many countries in the region, Douglas said.

“It’s really where the value is for traffickers,” he said. “Very high profits.”

Opium cultivation has been on a downward trend for the past few years before the military takes over the government in 2021.

Since taking control of the government, the military’s use of deadly force to stay in power has so escalated conflict with its civilian opponents that some experts describe the country as now in a state of civil war.

The cost is high, with 2,810 people killed by government forces and 17,427 detained so far, according to the Assistance Association for Political Prisoners.

The violence has prevented the government from reaching some areas to carry out drug eradication raids, as well as diverting its resources elsewhere. Consequently, eradication efforts appear to have eased significantly, with 1,403 hectares (3,467 acres) eradicated by 2022 – about 70% less than in 2021.

At the same time, as the conflict continues to take its toll on Myanmar’s economy, an increasing number of rural households have been forced to rely more on opium cultivation for their income, the UN said.

“The expansion of opium production that is underway is fundamentally about poverty and rural people responding to the economic situation,” Douglas said. “He was always there in difficult times. At the same time, the security situation is clearly difficult with increasing frequency and intensity of conflicts, and those involved in the drug economy have been left largely unchecked.”

The synthetic drug economy has also been booming for the same reasons, with reported regional seizures of methamphetamine and other drugs reaching record levels. For example, in a single September arrest in Laos, authorities seized 33 million methamphetamine tablets, along with 500 kilograms of crystalline methamphetamine.