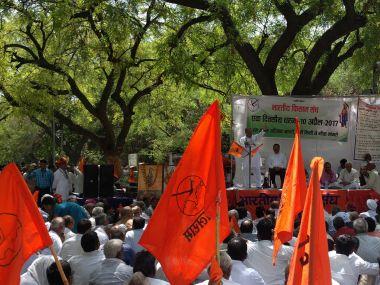 Whenever elections are around, RSS is projected as an “X” factor by much of the media and political analysts. Is it true?

With the announcement of the Assembly polls in five states, the role that the Rashtriya Swayamsevak Sangh (RSS) would play in securing victory for the Bharatiya Janata Party (BJP), especially in the state of Uttar Pradesh, makes the buzz.

Interestingly, whenever elections are around – Assembly or Lok Sabha – the RSS is projected as an “X” factor by much of the media and political analysts. The common projection is that the RSS is doing all it can to work for the BJP and win them polls and it is the RSS cadres and functionaries who are leading the way in the election campaign.

Are these assertions correct or are they the result of a lack of understanding of the workings and philosophy of RSS? To understand the role played by the RSS in India’s elections, one must understand the RSS’s worldview on politics and the evolution of its relationship with Bharatiya Jana Sangh (BJS) until 1977 and then with his successor the BJP from 1980. And for that you would have to go back about seven decades.

The first major debate over how RSS should deal with politics began after the organization’s first ban was unconditionally lifted in July 1949. The ban was wrongfully and maliciously imposed by the then Congressional government. led by Pandit Jawaharlal Nehru in February 1948. The assassination of Mahatma Gandhi, Congress, who grew increasingly wary of the growing influence of the RSS due to its stellar role in rescuing Hindus and Sikhs during partition , found an opportunity to crush the organization by blaming it for the Mahatma’s assassination and therefore banning it. But not even the slightest evidence was found against the RSS and the ban had to be lifted by the Nehru government.

Dwarika Prasad Mishra, the Home Minister for the Central Provinces at the time, wrote in his autobiography, Living in An Era: “That the assassination of Mahatma Gandhi enabled unscrupulous politicians to defame and, if possible , to shoot down their rivals is difficult to understand. Deny.” (Page 59 of the original English version).

“It is hard to deny that the assassination of Mahatma Gandhi enabled unscrupulous politicians to defame and, if possible, bring down their rivals.”

RSS cadres suffered a great deal of violence as a result of the ban and the way the Congress government presented the RSS as a culprit in the Mahatma’s assassination. Even its seat in Nagpur was confiscated. Thousands of them were imprisoned under ‘Satyagraha’ for opposing the ban. During these events, on the political front, there were practically no voices in favor of the RSS.

So, after the ban was lifted, a debate started in the RSS at different levels. Some of the executives wanted it to turn into a political party and actively participate in political life. However, the second Sarsanghchalak of the RSS, MS Golwalkar, popularly known as “Guruji”, took a firm position that the RSS would have nothing to do with active politics. He would continue to work in the socio-cultural field. This has been the consistent position of the organization ever since. RSS strongly believes that permanent changes in society can be brought about by working as a social organization. This may also explain the organization’s steady expansion across the country.

Bharatiya Jana Sangh, the former avatar of the BJP, was founded by Dr. Syama Prasad Mookerjee in 1951. Dr. Mookerjee was not from the RSS. He was a former member of the Nehru cabinet and had been associated with Hindu Mahasabha. Mookerjee left the Nehru cabinet in protest against the Nehru-Liaqat pact which compromised the interests of targeted Hindus in Pakistan at that time.

Dr. Mookerjee met Guruji before establishing the BJS, and the RSS agreed to loan out a few of its full-time staff (known as “Pracharak”) to help Mookerjee build the party. Over the next few years, Atal Bihari Vajpayee, LK Advani, Deendayal Upadhyaya, Nanaji Deshmukh were among those who helped build the BJS. This arrangement continued until 1977 when BJS merged with the Janata Party. Later, when the BJP was formed in 1980, the practice of loaning Pracharaks to the BJP resumed and has continued ever since. Pracharaks who work in the BJP are usually appointed as organizational secretaries and assistant organizational secretaries in the national and state units of the BJP. Their main task is to help strengthen the BJP at the organizational level.

As far as RSS is concerned, its main task is to hold its daily ‘Shakha’ and prepare volunteers, ie swayamsevaks of good character. These volunteers are free to work for any political party and they should not work only for the BJP. In fact, the current Sarsanghchalak of the RSS, Mohan Bhagwat, was specifically questioned during a three-day RSS sensitization program at Vigyan Bhavan in September 2018 about why the RSS Pracharaks work as organizing secretaries for BJP only, why not work for any other political party.

He replied, “Sangh gives organizational secretaries to those who ask for them. So far no one else has asked for it. If anyone asks, we’ll think about it. If they want to do a good job, we will definitely give them (RSS Pracharaks) because in 93 years we have not supported any political party. We have also supported a policy and when we support a policy, as our strength grows, its benefits reach the political party (which supports that policy)…those who can reap that benefit, they do. Those who cannot are left behind… when we fought against the emergency, we never thought that Jana Sangh should benefit. Those who fought against Emergency included Babu Jagjivan Ram. There was SM Joshi, NG Gore and even Gopalan ji from Left. Everyone took advantage of it. The Swayamsevaks worked for everyone…so we work for politics. We have not worked for parties and we will not. Now, if thanks to us someone can reap a benefit, then it is up to him to think about how to obtain this benefit. After all, we don’t do politics, they are the ones doing politics. (Yashaswi Bharat, Prabhat Prakashan, pages 264-265).

Sunil Ambekar, currently Akhil Bharatiya Prachar Pramukh (All India Chief of the Publicity Wing) of the RSS, further clarifies the world view of RSS electoral politics and the role it plays in this context (The RSS Roadmaps 21st Century, Rupa Publications, Pp144 -45), “Without a doubt, the work of the (Sangh) Parivar organizations has an impact on politics, and on electoral politics. The party that responds to their campaigns will have an advantage in the race for power. The Sangh’s umbrella idea on Hindutva has effectively challenged several parameters of politics and this has deep significance in the political discourse of the country.

The writer, author and columnist, is the author of several books on RSS. The opinions expressed are personal.