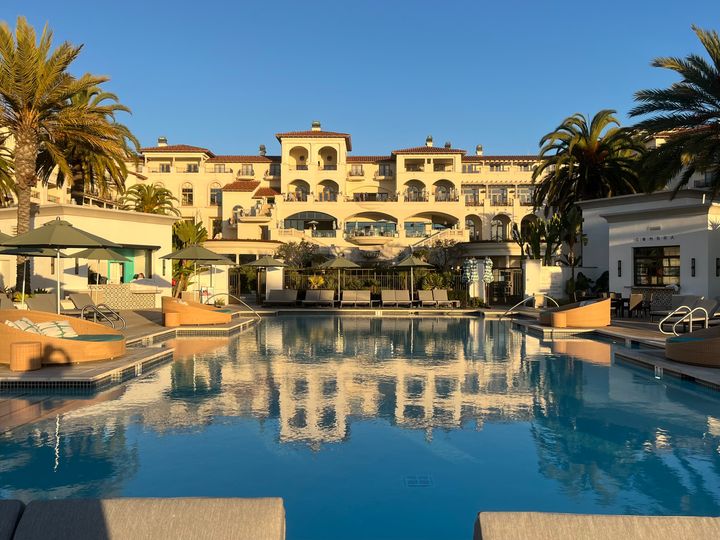 DANA POINT, Calif. — Any grassroots Republican activists thinking about going to the party’s winter meeting to lobby members ahead of Friday’s presidential election should probably check their credit card limits.

Rooms at the Waldorf Astoria Monarch Beach resort, where the Republican National Committee resides this week, start at $1,283 for Wednesday night, with an AAA discount, and $881 for Thursday night. These rates do not include a mandatory resort fee of $55 per night.

“It costs $75 to park a car!” lamented conservative radio host John Fredericks as he sat in the lobby bar, adding that breakfast for two had cost him $60. And we should be the party of the working class? This is like the Politburo going to the Black Sea.”

Perched on a bluff with commanding views of the Pacific Ocean, the hotel features a 100-foot pool and easy access to a secluded beach. It offers visitors a golf course, a spa and several luxury boutiques, including a Cartier’s jewelry store. Rooms have a deep Jacuzzi tub and feature copies of Robb Report magazine, a luxury lifestyle magazine, stacked with the hotel brochure.

Fredericks, a frequent guest on Steve Bannon’s “War Room” podcast and a supporter of former President Donald Trump’s coup attempt, said it was clear why the party chose the most expensive hotel for miles around.

“Why are they keeping it there? So you can’t go,” he told Bannon on a recent broadcast. “The grassroots is tired of being dictated to by these people’s arrogance and elitism…. I’m trying to give our base access to what’s going on.”

RNC members and staff pointed out that, thanks to the block rate negotiated with the hotel, members, their invitees and party staff pay a base rate of just $250 per night.

While that discount makes rooms affordable for members—many of whom aren’t particularly wealthy and who pay for the most part their own expenses to attend meetings—it still leaves hefty costs for food and incidentals.

“It’s ridiculous,” grumbled an RNC member who spoke of the restaurant prices on condition of anonymity. “I’m looking for every free meal I can get.”

An RNC official, who also spoke on condition of anonymity, said the party is limited in its capabilities. A hotel must have a minimum of 350 rooms and sufficient meeting space for the various committees and subcommittees to convene simultaneously, provide multiple meals for hundreds, and most importantly, be prepared to deal with potential protests and negative publicity. “Most hotels don’t want a Republican event,” the official said.

However, that block rate is only available to people that the party or one of its 168 members wants to join.

And that, by definition, excludes those “anti-establishment” party activists at the district and state levels most interested in blocking incumbent Chairperson Ronna McDaniel from winning a fourth two-year term.

“Her re-election will destroy the party,” Fredericks said.

Choosing expensive hotels also deters some media outlets from being there to report on meetings.

In the past, RNC-hired security personnel have worked to restrict journalists’ access. In 2021, during the Winter Gathering in Amelia Island, Florida, party-contracted security mitigation reporters confined themselves to the public areas of the Ritz Carlton. A year later, RNC security in Salt Lake City actually required reporters to show their room keys at the Great America Hotel or they would be kicked off the premises.

If the intention of choosing such an exclusive venue was to fend off theater and controversy, it may not have succeeded.

Fredericks, who teamed up with Bannon, hosted a candidate debate Wednesday at a nearby Marriott Residence Inn, but it ended with only election conspiracy theorist Mike Lindell, a major sponsor of both podcasts.

A conference room of 50 Bannon fans, many in Trump gear, filled the room when Fredericks, who uses hundreds of thousands of Hilton Honors points to cover his room rate, told them they wouldn’t be welcome at the Waldorf Astoria.

“Good luck walking down the corridor with the Mussolini Gestapo there,” he warned.

Caroline Wren, a former Trump fundraiser who now supports Harmeet Dhillon’s challenge to McDaniel and who appeared on the debate to represent Dhillon, chimed in with, “If we won an election, it would be fine. But we are not.”

On Wednesday evening, unsuccessful Arizona gubernatorial candidate Kari Lake mingled in the lobby, and Charlie Kirk, head of Turning Point USA, is also expected to visit. Both are Dhillon supporters.

Meanwhile, former Arkansas governor and potential 2024 Republican presidential nominee Asa Hutchinson attends the meeting to pitch attendees. Fellow candidate and former Secretary of State Mike Pompeo is not attending, but sent copies of his new book for distribution to members. Trump, who has already announced his candidacy for 2024, does not appear in person but sends three of his aides.

The 168 members of the RNC will vote on the officials on Friday, including the chairman. Closed doors, members only, started on Wednesday and will end on Thursday.