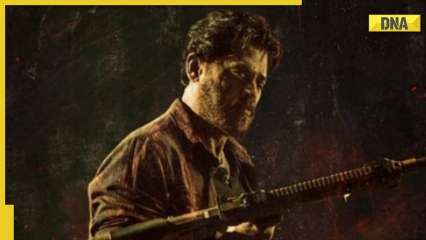 Venkatesh Daggubati, aka Victory Venkatesh, has joined forces with HIT director Sailesh Kolanu for the Tollywood star’s 75th film. On Wednesday, the makers announced the film, titled Saindhav, and showed a glimpse of it.

The makers also released the poster which shows a bearded Venkatesh with a gun. In the background there is a car and an explosion takes place. Saindhav will obviously be high on action and Venky will play an intense role.

The first glimpse shows Venkatesh entering a port area in the fictional town of Chandraprastha with a medical cooler. He takes a pistol out of the container and then warns a group of goons: “Nenikkade untanraa…ekkadiki ellanu…rammanu…” The makers also announced that they plan to start shooting soon. Santosh Narayanan. who gave the background score for the video. will compose the film’s music.

Fans reacted to the teaser with one of them writing, “I’ve been waiting a long time for an action entertainer from Venky. Finally it’s here and it’s sure to be one of the biggest blockbusters.” The second said, “This is an unexpected one from Venky sir… Just a great look and rockin’ music… Blockbuster on the way.” The third said, “We need a biggest blockbuster and resounding with Victory venkatesh garu and sailesh and Niharika banner with Anirudh music, let’s get a bigger hit than Vikram’s. Global fans of Victory venkatesh and global telugu- audiences eagerly await!.”

See also  Go, go, Power Rangers! Find out which original stars will reunite for the 30th Anniversary Special on Netflix

The film, produced by Venkat Boyanapalli under the banner of Niharika Entertainment, has raised expectations as the star, director and producer have all delivered blockbusters with each of their latest films.

Saindhav is Niharika Entertainment’s No. 2 production after their successful outing with Shyam Singha Roy. For Venkatesh, this will be his most expensive film ever. It will be released in all southern languages ​​and Hindi. The names of the other cast members will be announced soon. (with input from IANS)


See also  Tracee Ellis Ross, 50, talks about going through perimenopause: 'My ability to have a child is failing me'