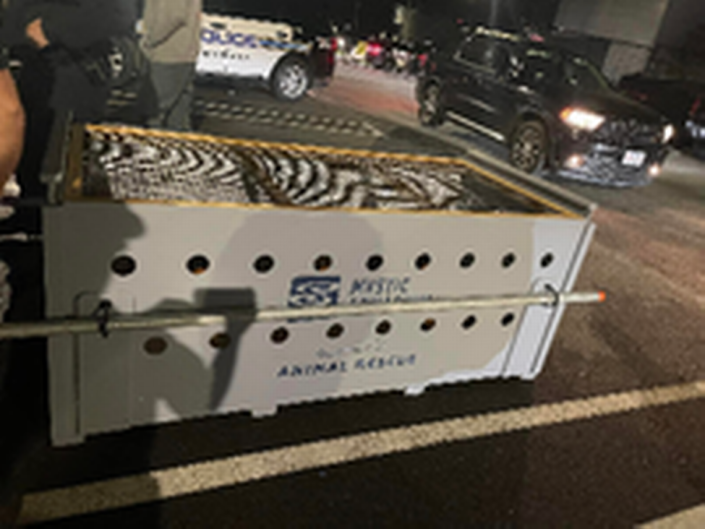 Shoebert the seal left Shoe Pond, crossed a parking lot, and arrived at the Beverly Police Department’s side door around 2:30 a.m. Sept. 23, according to a Facebook post from the department.

Shortly after Shoebert arrived at the department, police officers were joined by local animal control, the Beverly Fire Department, members of the National Oceanic and Atmospheric Association and the International Fund for Animal Welfare.

“We were able to get Shoebert into a dedicated wildlife carrier without incident,” police said in their post. “Shoebert appeared to be in good health and a little sassy in the early morning hours.”

The gray seal is now at the Mystic Aquarium in Connecticut for observation and any necessary medical care before being released into the wild, police said.

Shoebert first appeared in Shoe Pond on Sept. 15, according to NOAA Fisheries New England/Mid-Atlantic. He entered the pond through a 250-foot cement tunnel that connects the pond to Beverly Harbor and drains into the Bass River.

NOAA officials kept a close eye on the seal, noting that it had plenty of food and appeared happy and healthy in several Facebook posts.

The town is happy that Shoebert is getting the care he needs, but the police say they will all miss their special guest.

“Thank you Shoebert for your trust in the BPD, you will be sorely missed by your friends here. You have brought much joy and happiness to our city over the past week,” the police wrote in their Facebook post. “Feel free to come back and visit anytime!”

Beverly is about 25 miles northeast of Boston.

Runaway chimpanzee returns to zoo in Ukraine — with help from bicycle, video shows

Qantas does not claim chaos lost bags due to outsourcing