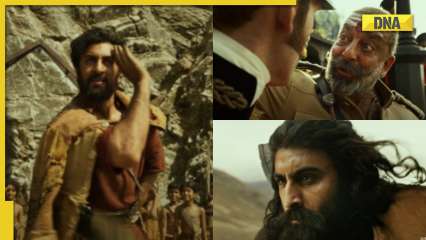 Dropping the highly anticipated trailer on social media, the creators wrote in the caption, “A father’s legacy. A son’s destiny. The legend of SHAMSHERA is here, watch the #ShamsheraTrailer NOW. Released in Hindi, Tamil and Telugu. Celebrate #Shamshera with #YRF50 only at a theater near you on July 22.”

Check out the trailer below:

A father’s legacy. The fate of a son. The legend of SHAMSHERA is here, watch it #ShamsheraTrailer NOW. Released in Hindi, Tamil and Telugu. To celebrate #Shamshera with #YRF50 only at a theater near you on July 22. pic.twitter.com/bdDVKePzFs— Yash Raj Films (@yrf) June 24, 2022

In Shamshera, Ranbir Kapoor plays a quintessential larger-than-life Hindi film hero for the first time in his career. Ranbir hits the big screen four years after delivering the blockbuster Sanju and his return to cinema is one of the most anticipated events for fans and audiences alike.


The story of Shamshera is set in the fictional city of Kaza, where a tribe of warriors are imprisoned, enslaved, and tortured by a ruthless overbearing general Shudh Singh. It is the story of a man who became a slave, a slave who became a chief and then a legend for his tribe. He fights tirelessly for the freedom and dignity of his tribe. His name is Shamshera.


The high-octane, adrenaline-pumping entertainer is set in the 1800s in the heart of India. It has the big promise of a never-before-seen Ranbir Kapoor, who plays Shamshera in the movie! Sanjay Dutt plays Ranbir’s nemesis in this massive casting stunt and his confrontation with Ranbir will be something to watch as they fiercely pursue each other without mercy.


This action extravaganza was produced by Aditya Chopra and is set to be released in Hindi, Tamil and Telugu on July 22, 2022.

Nicole Kidman is mercilessly mocked for her “weird” show at the...