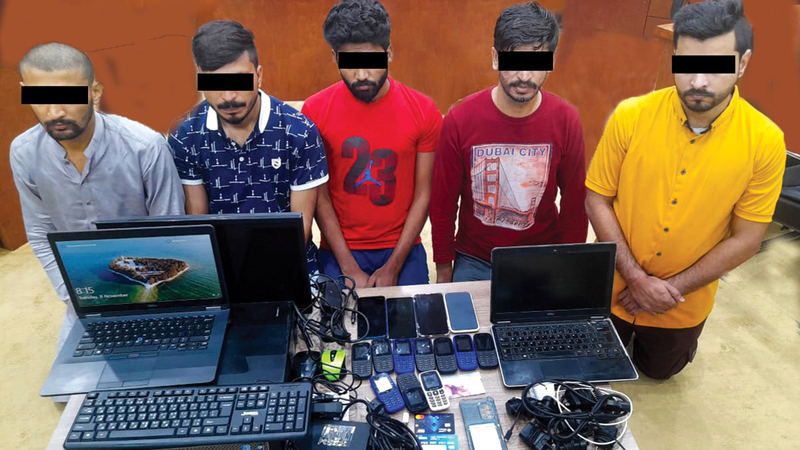 The Criminal Investigation and Investigation Department of the Sharjah Police arrested a gang from an Asian country, consisting of five people, who impersonated employees of banks, banks and government institutions, to trap their victims and seize their bank balances, and legal measures were taken against them, and they were referred to the Public Prosecution.

The Director of the Criminal Investigation Department, Colonel Omar Ahmed Belzod, said that the gang took one of the residential apartments as its headquarters to practice its fraudulent operations, which were followed up and monitored by the Organized Crime Department in the department, after several reports were received about its criminal activity.

He added that after legal measures were taken, the apartment was raided and the perpetrators, mobile phones, computers, and SIM cards that were used by the gang members to trap victims by fraud, were seized.

Balzod explained that the fraudsters make random calls to the phone numbers of community members, impersonating employees of banks, banks and government institutions, and ask the victims to update their personal data, and alert them to ban or freeze those accounts in the event of not responding to them, which prompts some individuals to do what is asked of them. And you give them the verification number (OTP), so that they can withdraw their bank balances and savings in moments. The Director of the Criminal Investigation and Investigation Department called on community members not to respond to such deceptive communications, and not to disclose bank account information and personal data or share them with anyone.

Last 16 World Cup 2022: Which teams are left, who is eliminated and the knockout matches

Enlargement back on EU agenda at Western Balkans summit

Billie Piper says she enjoyed her time in the ‘very drunk’...

Will Mellor enjoys a rare night out with wife Michelle McSween...