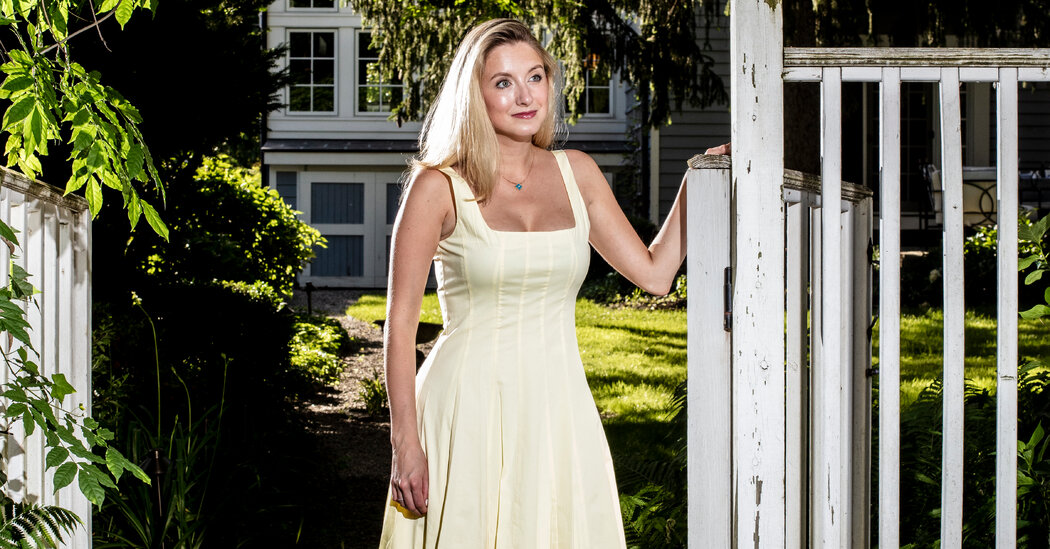 And when Dr. Katz lost his job, Ms. Gold promptly published an essay about their relationship in Common Sense, the newsletter of Bari Weiss, a former writer and editor of the New York Times opinion division. (“My alma mater isn’t the school I once loved,” part of the headline went. “But Joshua Katz is exactly the man I knew I married.”

“He’s young at heart and I’m an old soul, and it works,” Mrs. Gold said later.

While not yet a national player, she has long imagined the possibility. When Mrs. Gold was named the winner of the Pyne Prize, one of Princeton’s highest undergraduate awards for which Dr. Katz (they were not in a relationship at the time) was one of her nominees, the official announcement said that she aspired to be a public intellectual. (She had a head start. Mrs. Gold and her grandfather Robert W. Jenson, a Lutheran theologian, wrote a book, “Conversations With Poppi About God,” when she was only 8.)

As her guests were about to arrive, Mrs. Gold changed from a plain blue summer shift to a more glamorous yellow cinched-waisted dress, prompting an approving smile from her husband, who wore a pink linen shirt.

She set the long rectangular table right on the grass, with a Wedgewood blue and white tablecloth, cloth napkins tied in yellow ribbons, place cards inked in neat cursive hand, and melamine dishes in a Provençal pattern. She was schooled in formal ways from an early age, she said, as the only child of an actress and soap opera writer. “My mom gave a lot of dinner parties and I ended up talking to adults,” said Ms. Gold.

dr. Katz was her professor in two classes, Egyptology and Hesiod, and her freshman counselor, but there was no romance in sight, she said, until the summer of 2017, her senior year, when it was a slow burn. Besides, as a middle-aged Democrat and comfortably pot-bellied man, he wasn’t her type.

Monkeypox: This is how colleges prepare for potential outbreaks as students return