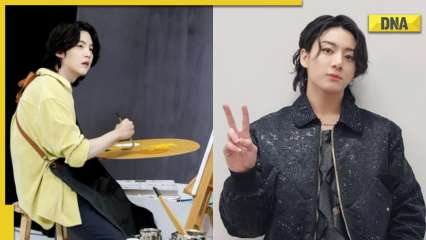 BTS member Suga broke the internet on Wednesday with his latest photos of him painting. BTS ARMY commented on the photos and in no time ‘Artist Yoongi Oppa’ started trending on Twitter.

Meanwhile, K-pop superband BTS member Jungkook has set a new US record and conquered iTunes charts with his World Cup song Dreamers. The lead singer of Euphoria, who was tapped to perform at the opening ceremony in Qatar, debuted the all-English song on Sunday ahead of his live performance of the song. As soon as the song was released, it rocketed to the top of iTunes charts in numerous countries around the world, aceshowbiz.com reports.

See also  The Weeknd reveals he contributed a new song to the Avatar: The Way Of Water soundtrack

Just 13 hours after its first release, the single had already reached No. 1 on iTunes Top Songs charts in at least 102 different regions, including the world’s eight largest music markets, United States, United Kingdom, Japan, France, Canada, Australia, Germany and Italy. In addition, “Dreamers” set the new record for the fastest FIFA World Cup official song to reach No. 1 on the iTunes Top Songs chart in the United States.

According to South Korea’s News Herald, the song took just 2 hours and 11 minutes to top the chart. Jungkook later played ‘Dreamers’ at Albaite Stadium in Alcor, Qatar. He started the performance solo and was joined on stage by Qatari singer Fahad Al Kubaisi halfway through the song.

Dressed in a sparkly black jacket, he showed off his energetic dance moves alongside a bunch of backup dancers. “Look who we are, we are the dreamers / We make it happen, because we believe it,” he sings in the motivational single.

Read also: FIFA World Cup 2022 Opening Ceremony: BTS’ Jungkook all set to set fire to the stage; when, where to look

“Look who we are, we are the dreamers / We make it happen because we can see it.” In addition to Jungkook, who was announced as the headliner, and Fahad Al Kubaisi, the opening ceremony of the World Cup featured Hollywood actor Morgan Freeman, who gave a speech about the “emotions that now connect us all”.

He added: “We come together here as one great tribe and the earth is the tent we all live in.” (With input from IANS)

Millions of households ‘cannot afford heating’ as the cold sets in