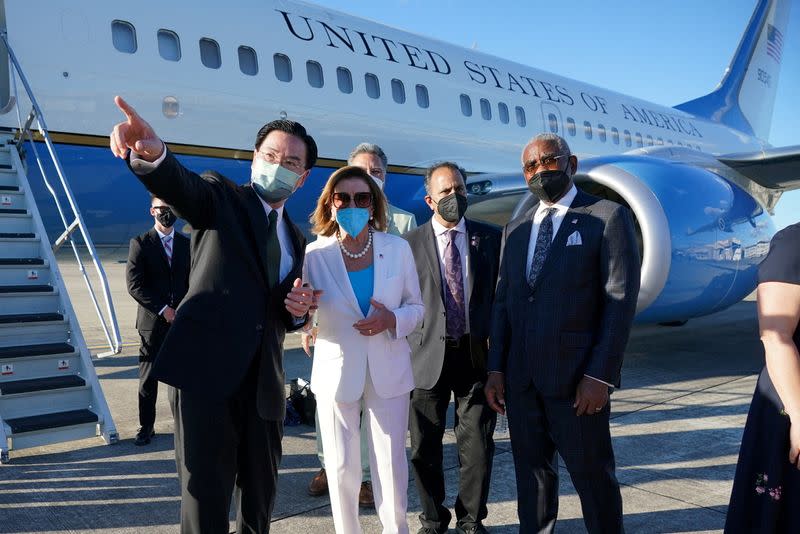 By Yimou Lee and David Brunnstrom

TAIPEI (Reuters) – Chinese planes and warships practiced an attack on Taiwan on Saturday, island officials said, in retaliation for a visit there by US House Speaker Nancy Pelosi, where Beijing is also discussing security and other issues with the United States. stopped.

Pelosi’s brief unannounced visit during the week to the China-claimed self-ruled island infuriated Beijing and led to unprecedented military exercises, including ballistic missiles fired over the capital Taipei.

The Chinese exercises – centered at six locations on the island – will last until Sunday afternoon.

Taiwan’s Defense Ministry said multiple Chinese ships and planes have conducted missions in the Taiwan Strait, with some crossing the median line, an unofficial buffer dividing the two sides, in what the Taiwan military described as a simulation attack on the island.

Chinese warships and planes continued to “push” into the median line of the Taiwan Strait on Saturday afternoon, said a person familiar with security planning.

Off the east coast of Taiwan and close to Japanese islands, Chinese warships and drones simulated attacks on American and Japanese warships, the person added.

The Taiwanese military sent out an alert and deployed patrol troops and air reconnaissance ships to oversee, while coastal missiles were put on standby.

The Defense Ministry also said it fired flares late Friday to warn seven drones flying over the Kinmen Islands and unidentified aircraft flying over the Matsu Islands. Both archipelagos are close to the coast of mainland China.

See also  Rushdie reportedly off the ventilator and talking

The Chinese military said Friday it has been conducting air and naval exercises in northern, southwest and eastern Taiwan to test the armed forces’ “joint combat capabilities”.

Pelosi arrived in Taiwan late Tuesday, the highest visit to the island by a US official in decades, despite Chinese warnings. Her trip has sparked a wave of retaliation, including sanctions against Pelosi and her family.

Shortly after its delegation left Japan on Friday, the final stop of a week-long Asia tour, China announced it was ending dialogue with the United States, including theater-level military commanders’ contacts on climate change.

US Secretary of State Antony Blinken said during a visit to the Philippines that cutting off dialogue on issues such as narcotics and cross-border crime was “irresponsible” and that security contacts were vital to easing tensions. [L1N2ZI050]

Blinken said China’s cessation of bilateral ties on climate would punish the world in particular.

“Suspending climate cooperation is not punishing the United States, it is punishing the world, especially developing countries,” he told a news conference. “We must not cooperate with hostages in matters of global importance.”

See also  Alex Jones worth up to $240 million, expert says as family sues for damages

Jing Quan, a senior official at the Chinese embassy in Washington, reiterated during a briefing: “The only way out of this crisis is for the US to take immediate action to correct its mistakes and remove the dire consequences of Pelosi’s visit.” .”

“There is nothing here for the United States to rectify. The Chinese can go a long way in reducing tensions by simply stopping these provocative military exercises and ending the rhetoric,” Kirby told reporters.

China has made no mention of a suspension of military talks at the highest levels, such as with US Defense Secretary Lloyd Austin and the Chairman of the Joint Chiefs of Staff General Mark Milley. While those calls aren’t common, officials have said they’re important in an emergency.

Kirby said it was not unusual for China to cut off military talks in times of tension, but “not all channels” between military leaders had been cut.

“Part of this overreaction has been to strictly limit its defense activities when a responsible state would recognize that we need them most right now,” acting Pentagon spokesman Todd Breasseale said.

Speaking in Japan after meeting Prime Minister Fumio Kishida, Pelosi said her Asia trip was “not about changing the status quo in Taiwan or the region.”

The Japanese Ministry of Defense reported that as many as four missiles flew over the capital of Taiwan, which is unprecedented. It also said that five of the nine missiles fired into its territory landed in its exclusive economic zone.

Kishida told the visiting UN Secretary-General Antonio Guterres that he strongly condemned China’s missile launches as “a serious problem related to the security of Japan and the security of the Japanese people,” the foreign ministry said.

Taiwan has been self-governing since 1949, when Mao Zedong’s communists took power in Beijing after defeating Chiang Kai-shek’s Kuomintang nationalists in a civil war, leading them to retreat to the island.

Beijing says relations with Taiwan are an internal matter and that it reserves the right to bring the island under its control, if necessary by force. Taiwan rejects China’s claims that only the Taiwanese people can decide their future.

(Reporting by Yimou Lee in Taipei and David Brunnstrom in Manila, written by Tony Munroe and Greg Torode; edited by Robert Birsel)

Food and fiber exports are rising, adding $1.1 billion to the...