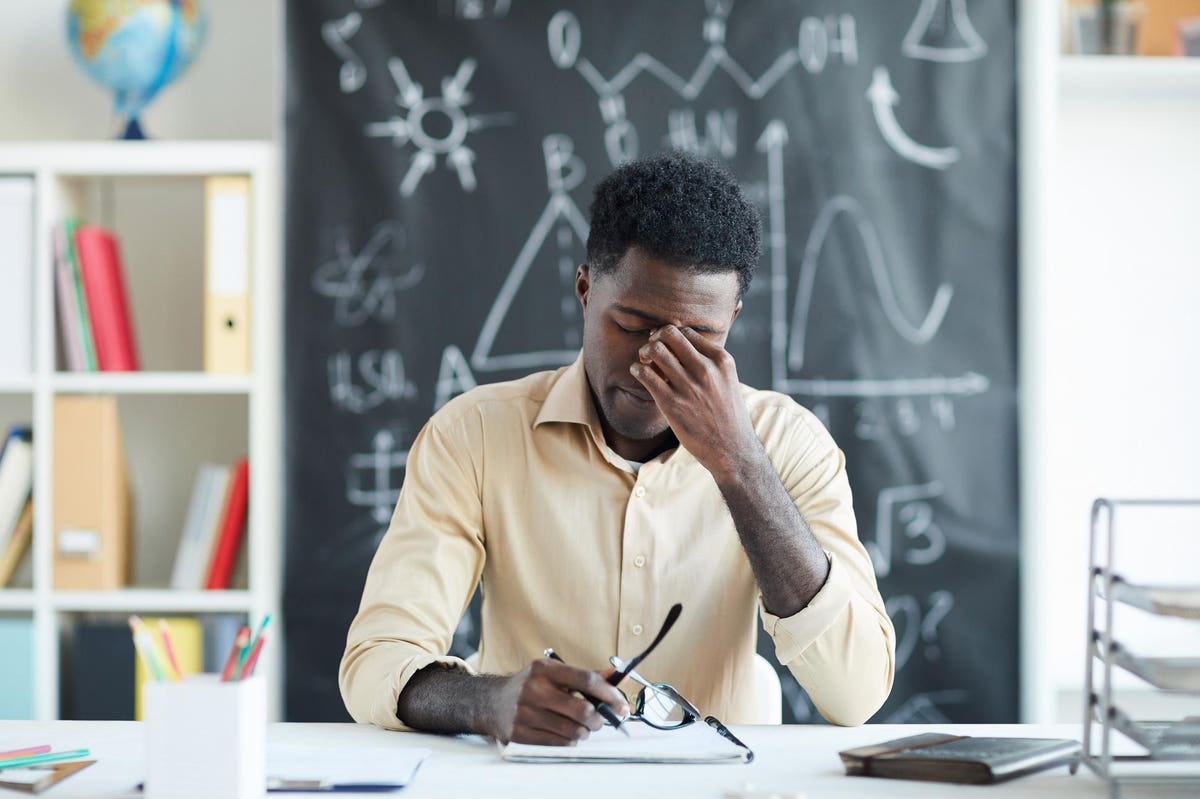 According to a new survey, teachers and school leaders are more than twice as likely to be stressed as other working adults.

Educators were also more likely to suffer from burnout or depression than the general working population and to admit that they do not cope well with work-related stress.

And one in three teachers and principals say they are likely to quit their current job by the end of this school year as increased pressure resulting from the pandemic weighs on well-being.

Nearly three-quarters (73%) of teachers and 85% of principals say they frequently experience work-related stress.

That compares to 35% among adults in other occupations, according to the survey conducted by the RAND Corporation.

Hispanic/Latin teachers were more likely to report feeling stressed, as were mid-career teachers – those with between six and 20 years of experience.

The survey, funded by the National Education Association (NEA) and the American Federation of Teachers (AFT), also found that the pandemic was a major factor in increasing stress.

Almost half (47%) of teachers said that helping their students recover lost learning as a result of the pandemic was one of their top three sources of work-related stress.

“Teaching has never been an easy task, but the added stress of the pandemic, resulting shortages, security concerns and the injection of politics into our classrooms have had a real impact on our educators” , said AFT Chairman Randi Weingarten.

“Teachers told us their dedication to working with students keeps them in their jobs, even though pandemic conditions and security concerns have made teaching more difficult.”

The survey also found that 59% of teachers and 48% of principals said they felt burnt out, compared to 44% of other working adults.

Just over a quarter – 28% – of educators reported experiencing symptoms of depression, compared to 17% of their non-teaching peers, while twice as many teachers reported not coping well with work-related stress (24 % at 12 % ).

Teachers with six to 10 years of experience were significantly more likely to say they were burnt out or to report feelings of depression, or to say they did not handle stress well, than other educators.

For school leaders, the main source of stress was finding enough staff, an issue that may be exacerbated by the impact of the pandemic, as increased stress risks creating an exodus of teachers and school leaders. ‘establishment.

Teachers who said they had poor well-being or stressful working conditions were more likely to say they wanted to quit.

And while awareness of the need to support employee wellbeing has undoubtedly increased in the wake of the pandemic, teachers were less likely than those in other professions to have access to counseling services.

While around a third of teachers said they had access to advice through their employers, this compares to around half of adults employed in other sectors.

College doesn’t have to be a scam

The US Secretary of Education wants to build a pathway to education. Here is the problem with this approach.