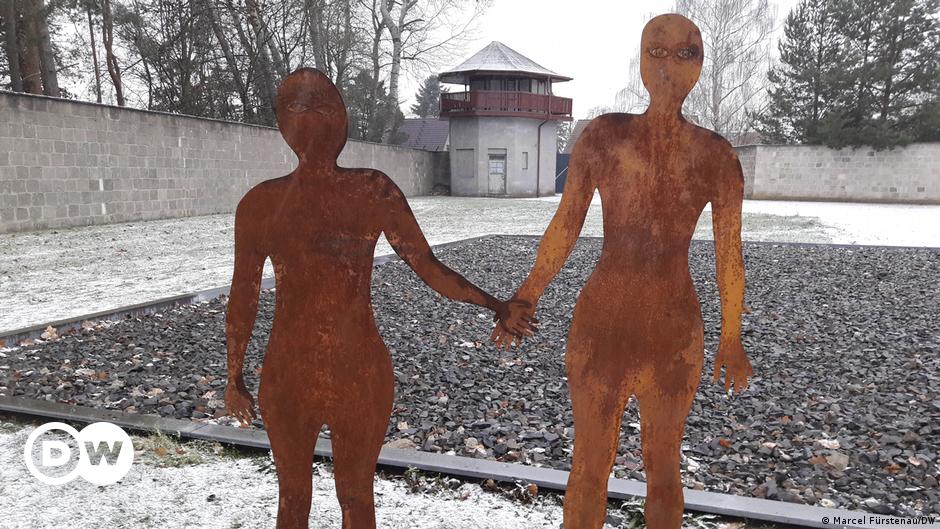 The exhibition “Untold (Hi-)stories” in the former concentration camp Sachsenhausen outside of Berlin is exceptional not only because of its decentralized layout or because the art is made by amateurs. What makes this exhibition unique is that it offers an insight into how young people from all over Europe today view the crimes committed by Nazi Germany.

The sculptures, installations and short films were created as part of a project called “Young Interventions”, launched in 2020. Now they are publicly displayed on the extensive grounds of the Sachsenhausen concentration camp, which was converted into a memorial in 1961 and now also houses a museum.

Although there is a map, perhaps the best way to experience the exhibition is to walk around the monument and randomly come across the installations.

Sachsenhausen was built in 1936 and the first piece of art seen is in Tower A, the entrance gate to the camp that was built that year by the first prisoners. You will come across other works as you walk through the barracks, where more than 200,000 people were imprisoned before the liberation of the camp by Soviet and Polish soldiers in April 1945. Tens of thousands of Sachsenhausen prisoners died of starvation and disease, largely caused by forced labour, medical experiments, and assault.

For the exhibition, groups of teenagers, young adults and descendants of camp survivors from around the world have gathered several times over the past two years for workshops. Under professional guidance, the young people then created their works of art.

Dorothy Ann van der Ent and Alex Rovira Lopez come from Spain, a country that was also once under a fascist dictatorship. “We were very shocked when we heard how people were being robbed of their identities here,” Van der Ent told TUSEN. “They were just a number or a triangle.” The couple’s contribution to the exhibition was a three-dimensional sculpture somewhat similar to Tower A.

Prisoners in German concentration camps were not allowed to give their name to the guards and had to give their assigned number. In Auschwitz, in German-occupied Poland, it was also tattooed on their forearms.

Prisoners also had a triangle of cloth decorated with different colors on the left side of their striped prisoner clothes, which the Nazis used to categorize their victims: political opponents were marked in red, homosexuals in pink, so-called “anti-socials”. black, criminals green. A yellow triangle was later added for Jews.

Devil’s work then and now

Henrieix du Teilhet was inspired by these different colored triangles used to stigmatize the prisoners. In his workshop, he said, he learned “that without all the administration behind it, the atrocities wouldn’t have been possible.” Du Teilhet decided he wanted to use his work to confront how people are still pigeonholed based on their political and sexual orientation.

See also  There must be decisive consequences for those colluding with gangs, says Prime Minister Alan Winde

His installation invites people to “change their perspective”: a transparent plastic film shows 266 colored triangles, but from the other side; they are all white. And that, says du Teilhet, hopefully leads to the question, “Why do we still think in categories and why do we still exclude people?”

The short film ‘Men in Zebra’ is a family project made by Stefan, Mischa, Milo and Lotus Lemaire from the Netherlands. In the film, the family members read from the memoirs of their grandfather and great-grandfather Jan, against the backdrop of the former concentration camp. Jan, a communist, was deported by the Nazis from the Netherlands to Sachsenhausen, where he was imprisoned from 1942 until the end of the war in 1945.

Mischa Lemaire first visited Sachsenhausen in 2010 and returns often. His family’s film, which can also be viewed on YouTube, is a tribute to his grandfather. “When you read his diary and hear the family stories, you understand this place much better,” says Mischa.

How stones in Sachsenhausen ‘come to life’

Jan Lemaire was imprisoned in barrack 52 which, like most of the others, no longer exists. But the location is still marked by the foundation. “The diary makes the stones come to life here,” says his grandson Stefan, who never got to know his grandfather, who died at the age of 53 – just eight years after his liberation.

Today Stefan and Mischa are almost the same age as Jan Lemaire at the time of his death. Thanks to his notes from his years in Sachsenhausen, relatives of the third and fourth generation also learned how he felt about the Germans. “He made a big distinction between his German friends inside and outside the concentration camp on the one hand and the Nazis on the other,” says grandson Mischa.

When the pair talk about their short film in the exhibition ‘Untold (Hi-)stories’, they first do so in their mother tongue and then translate it, which they see as a way of honoring their grandfather. “Dutch people in this place, surrounded by art and beauty that comes from the heart – he would have liked to see that,” says Stefan.

The exhibition “Untold (Hi-)stories” in the concentration camp memorial Sachsenhausen on display until the end of 2023.