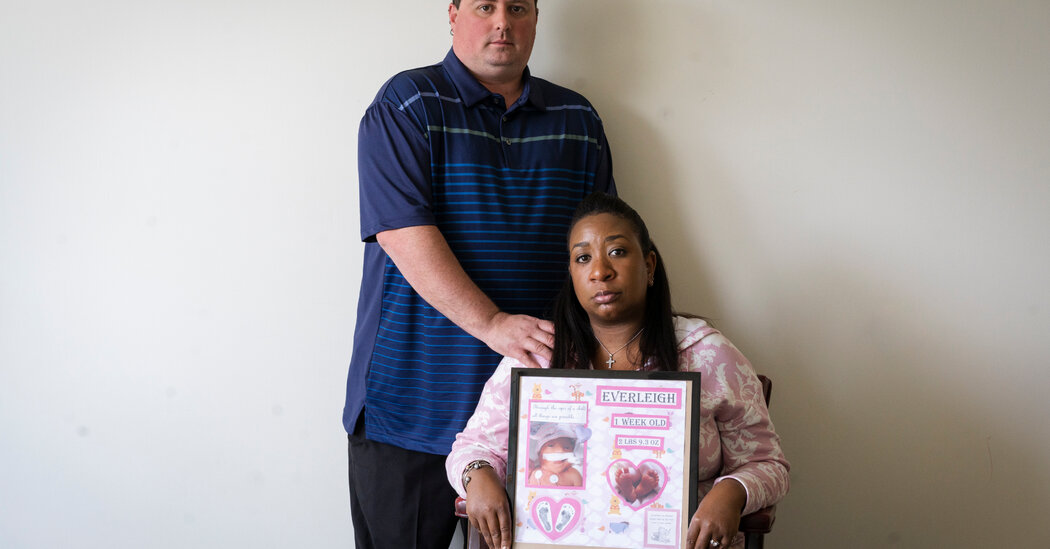 Everleigh Victoria McCarthy was born three months premature at Brigham and Women’s Hospital in Boston and weighed just over two pounds. Shortly after her birth on July 25, 2020, she developed massive bleeding in her brain.

Still, her parents, Alana Ross and Daniel McCarthy, held out hope that they could bring her home. They held her in their arms, read “Little Red Riding Hood” to her and told her they loved her.

But on August 6, when Everleigh was less than 2 weeks old, doctors told the couple she would not survive. The baby was removed from the ventilator and Ms Ross held her and watched the heart monitor flatline.

The nurses gently cleaned Everleigh’s body and dressed her in a white satin robe. His parents then began the daunting task of planning a memorial service for their firstborn.

But when the funeral home attempted to retrieve Everleigh’s body four days later, hospital workers said they could not find her remains, according to a police report.

Boston police determined that the baby’s body “was probably mistaken for soiled laundry” and disposed of it, officers wrote in the report.

When the funeral home called the couple to tell them their child’s body had been lost, another wave of grief hit them.

On Thursday, Ms. Ross and Mr. McCarthy sued the hospital in Suffolk County Superior Court in Boston. They are not asking for a specific monetary amount, said Greg Henning, one of the couple’s lawyers. The goal, the couple said, was to prevent the hospital from losing the body of someone else’s child.

“We don’t want anyone else going through this,” said Ms Ross, 37. “We want the hospital to be held accountable. We want them to fix that.

In a statement Thursday, Dr. Sunil Eappen, chief medical officer of Brigham and Women’s Hospital, expressed “our deepest condolences and deepest apologies to the Ross and McCarthy family for their loss and the heartbreaking circumstances surrounding it.” .

“As in any case where a concern is raised about our standard of care or practice,” he said, “we easily and transparently shared the details with the patient’s family. We always assess systemic and human factors that contribute to errors or potential issues raised by patients, family members or staff and take action. Due to ongoing litigation, we are unable to comment specifically on this matter.

A lawyer for the hospital did not immediately respond to a request for comment.

The loss of a body by a hospital, especially a child, seems unimaginable, but it happens with some frequency. In 2017, a woman sued after a Minnesota hospital discarded her stillborn baby, whose remains were found two weeks later in a bag of dirty laundry in a laundromat. In 2009, police searched dumps in Pennsylvania and New Jersey after the family of a baby who died 20 minutes after birth said the hospital accidentally dumped the body.

“We don’t know the answer to how often this happens,” Mr. Henning said. “Often the institutions that lose a child or a body realize what an extraordinarily terrible type of conduct this is.”

He added: “And they want to fix the problem before it becomes a public issue.”

In the Boston case, relatives of Ms Ross and Mr McCarthy called police a day after the couple learned that Everleigh’s remains were missing.

Detectives interviewed a hospital pathologist who initially told them that only pathologists were allowed into the hospital morgue examination room and that no soiled linen had been removed on day after Everleigh’s body had been brought there.

But the pathologist later admitted to seeing laundry on a stainless steel tray and tossing it into a bag intended for soiled materials, according to the police report.

Police have learned that the laundry is being taken to a cleaning service with a compactor on site. A waste management company then sends all hospital waste to landfills in South Carolina and New Hampshire, or to be incinerated at another facility.

Officers and employees twice searched a dumpster in the center of Boston’s Roxbury neighborhood, going through hospital gowns, blood-soaked clothes and rags, and dirty sheets and towels for hours. They did not find the body, according to the police report.

Police also noted that one of the nurses who brought Everleigh’s body to the morgue did not respond to calls from the hospital, which was carrying out its own investigation. The hospital also failed to provide detectives with a “full video” showing what happened between when the baby’s body was brought to the morgue and when hospital workers realized his remains were gone.

Ms Ross and Mr McCarthy, who had planned to bury Everleigh in a family plot, said they were still in disbelief that their daughter’s body went missing.

Ms. Ross, a clinical medical writer, and Mr. McCarthy, general manager of a frozen pie company, met when they were in fifth grade. They grew up in the Hyde Park neighborhood of Boston, where they played freeze tag and basketball during recess.

They remained friends over the years, but didn’t fall in love until they were 20, as they bonded over recent breakups.

“We knew what we didn’t want,” McCarthy said. “We saw a lot of what we wanted in each other.”

They moved in together in 2008. Ten years later, they decided to start a family.

The first two pregnancies ended in miscarriages, but they were optimistic when Ms Ross fell pregnant with Everleigh, who kicked energetically.

But during the second trimester, Ms Ross learned that her cervix was shortening, which meant she was at risk of giving birth early. She was put on partial rest, but on July 23, 2020, she felt her waters break and the couple rushed to Brigham and Women’s, a 180-year-old institution that bills itself as “the most trusted name in matters of women’s health.

All that Mrs Ross and Mr McCarthy have left of Everleigh are photographs, a few keepsakes and a keepsake box that the hospital nurses put together which includes the water that Everleigh’s grandmothers, who are Catholic, used to baptize her in her last moments.

The couple went to therapy. They are determined to have another child.

“We’re still trying to move on and eventually have a family,” McCarthy said. “Right now we’re fighting that and telling Everleigh’s story because she’s not here to tell it.”

Large burning rig, wildfire blocks traffic on US Highway 50 in the Sierra

Biden opens up the possibility of more offshore oil drilling in...