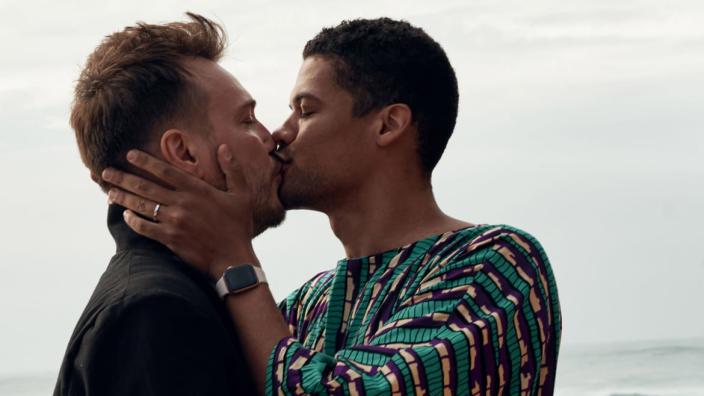 They were tall and handsome and walked hand in hand through Madison Square Park to look at the Flatiron Building. They both smiled. They had many reasons to feel happy in New York City.

Mikhail Zygar, a celebrated Russian author (whose books focus on Putin’s elite and his use of propaganda), and his partner, Russian actor and model Jean-Michel Shcherbak, recently showed their homeland an example of courage and honesty. They celebrated a big and fun wedding – their own – in Lisbon, Portugal. Russia has never seen a happy same-sex marriage before. Mikhail, former editor-in-chief of the Russian TV channel Rain, and Jean-Michel were the first to make that leap for each other.

LGBT, terrified for their lives in Russia and desperate for asylum

Dozens of friends, mostly exiled Russian journalists, came from around the world to celebrate the couple in a picturesque square in the Portuguese capital. For three years they had to hide their love in Russia, where the law allows the removal of children of homosexual parents. And now Zygar’s 12-year-old daughter was with them at their happy celebration of friends and family.

See also  Talks between Serbia and Kosovo have collapsed

After their official ceremony on Oct. 25, Zygar took a deep breath and wrote on social media, “We got married. Love, freedom, truth and happiness. Start the liberalization from within yourself.”

Expecting an embarrassing storm in comments, he posted and turned off his mobile. “I would compare it to jumping with a parachute,” he told The Daily Beast. “The lightness of being, the happiness, the relief I experienced was overwhelming,” Shcherbak added, with a big, happy smile on his face.

It was his first visit to New York and their honeymoon was full of new impressions and celebrations. Shcherbak and Zygar left Russia in the early days of the war and moved to Berlin feeling “like everything behind them has been burned,” Zygar said. “Here in New York on this journey, I’ve finally stopped missing the past,” Shcherbak added.

The public reaction to their marriage took the couple by surprise. They received thousands of supportive comments and warm personal messages from Russians who were genuinely happy for them. “Our wedding turned out to be a unique discovery for many people. Each of them has the chance to be free, despite stereotyped thinking,” Shcherbak said.

But neither his mother nor Zygar’s father, a retired GRU officer, congratulated them. “My mom hates gay people, she clearly made me understand it when I was 15 years old,” Shcherbak said. “The biggest surprise we had was the overwhelmingly supportive response from thousands of Russians, which basically shows that people in Russia are not homophobic, just brainwashed,” Zygar added.

The Russian economy may be shrinking, the Russian military may have missed all of the Kremlin’s deadlines for winning the war in Ukraine, but Russian authorities are still finding time to persecute Russia’s LGBTQ community. Lawmakers are discussing what else could be banned under the definition of so-called “LGBT propaganda” – now there’s an idea to ban any kind of promotion of homosexuality on the internet and in culture.

The Kremlin is destroying the image of the enemy as Putin’s war is the war against what the authorities continually characterize as the decaying West – and they are making their point by including LGBTQ and HIV-positive people in their arguments said the Russian journalist. and personality Karèn Shainyan told The Daily Beast. “The boys’ wedding and the public reaction to it showed the gulf between state propaganda and public opinion. Something is definitely changing in Russia. Despite the pressure, LGBTQ literature is becoming very popular and selling very well.”

The wedding was also a step towards the “creation of a new, free and fair Russia,” Zygar hopes. Just a few days before their wedding, Russia designated Zygar as a “foreign agent.” The writer learned from his Russian publisher that the authorities had made a list of “forbidden authors” – writers with an anti-war stance – and distributed it in Moscow bookstores. The blacklist included Dmitry Bykov, Boris Akunin, Lyudmila Ulitskaya and Zygar herself. Stores were not allowed to list Zygar’s work next to best-selling books; the books were still for sale, but with a note inside that read, “Foreign Agent.”

“By law, every ‘foreign agent’ must post the official label required by the authorities next to every social media post, so we had previously discussed what kind of fun labels Misha should publish if he is appointed,” Shcherbak told The Daily Beast. . “We agreed that he would not comply with the requirement.”

One of the supportive messages the couple received after their wedding was especially memorable. It came from Ukraine and said: “We also fight for your values.” The turmoil of the past few months has been overwhelming for both grooms, but awareness of the steps they’re taking has been sharper than ever. “We knew there was a lack of freedom in Russia, and now we realize that we can fight for it with every step we take in our personal lives,” Zygar told The Daily Beast.

China: Many arrests in a wave of protests against Corona policy

SEE IT: Christmas trees will be hot on buyers’ heels this...