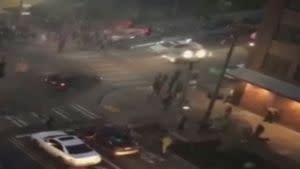 Three people who allegedly participated in street races in Pierce and King counties over the past two weeks have been arrested by Tacoma police.

Tacoma Police Department spokeswoman Wendy Haddow said a 20-year-old man who allegedly organized and promoted a number of street racing events over the past month was arrested at a home in Tacoma.

This person is believed to have eluded several Tacoma and Lakewood officers over the past few weeks.

Police say when the man was arrested he was sitting on a loaded handgun with an extended magazine.

Over 90 illegal ‘ghost weapons’ seized by LASD deputies in Palmdale

‘Lean on each other’: Mourners embrace and mourn during vigils for victims of 4th of July parade massacre in Highland Park

Five buys, no sells – how Questor’s trusted advice is doing...