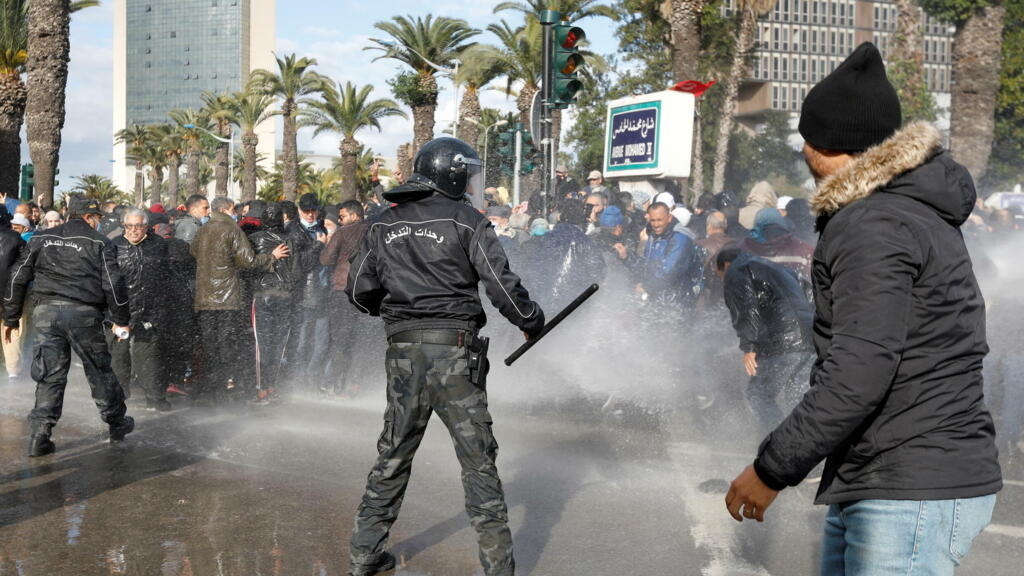 As the country marks 11 years since the late dictator Zine El Abidine Ben Ali fled into exile, police deployed heavily in central Tunis to counter anti-Saied rallies calling for an end to his ” Rebellion “.

Protesters had gathered despite restrictions on gatherings imposed on Thursday as coronavirus cases surged in the North African country, but which Saied’s opponents say are politically motivated.

TUSEN journalists saw more than 1,000 protesters gathered on Avenue Mohamed V, but they were prevented from reaching the iconic Avenue Habib Bourguiba, the epicenter of the large protests that toppled Ben Ali in 2011.

Some protesters broke through a police cordon before police baton charges and tear gas and water cannons pushed them back.

“This is the most violent intervention by the security forces that we have seen in a year, both in terms of the methods used and the number of arrests,” said Fathi Jarai, president of the INPT, the organization independent anti-torture.

Some protesters had chanted “down with the coup!”, a reference to Saied’s July 25 moves in which he sacked the government, froze parliament and seized a series of powers.

He has since practically ruled by decree, much to the chagrin of his opponents, including the powerful Islamist-inspired party Ennahdha.

Some Tunisians, tired of the incompetent and grafted parliamentary system, welcomed his moves.

But for his critics, both among Ennahdha members and on the left, they foreshadowed a possible return to the same kind of autocratic practices that were common under Ben Ali.

“We are here to defend the institutions of the republic,” she said.

“These people, who overthrew a 23-year-old dictatorship, are not going to let another dictator take their place.”

One of Saied’s moves was to move the official anniversary of the revolution from the date of Ben Ali’s flight to December 17, the day in 2010 that vegetable vendor Mohamed Bouazizi burned himself to death, sparking the first mass demonstrations.

This move was seen as symbolic of Saied’s view that the revolution had been stolen.

Sofiane Ferhani, whose sister died during the revolution, said Saied had no right to “touch” the January 14 anniversary.

A protester told a police officer on Friday: “You work for Sisi and the United Arab Emirates!

The protests took place despite a series of measures, including a nighttime curfew and a ban on public gatherings, introduced on Thursday night allegedly to tackle a sharp rise in coronavirus infections.

Ennahdha, the largest party in the suspended parliament, accused Saied on Thursday of “using the coronavirus crisis for political purposes, targeting what remains of the margin of freedom” in Tunisia.

The confrontation comes amid heightened tensions between the party and Saied after former justice minister Noureddine Bhiri and another senior Ennhadha official were arrested by plainclothes police on December 31 and later charged with possible misdemeanors. of “terrorism”.

Boris Johnson latest: Sue Gray report drops ‘very soon’ amid tension over what will be revealed

FTSE 100 Live: Travel stocks rebound ahead of US interest rate...