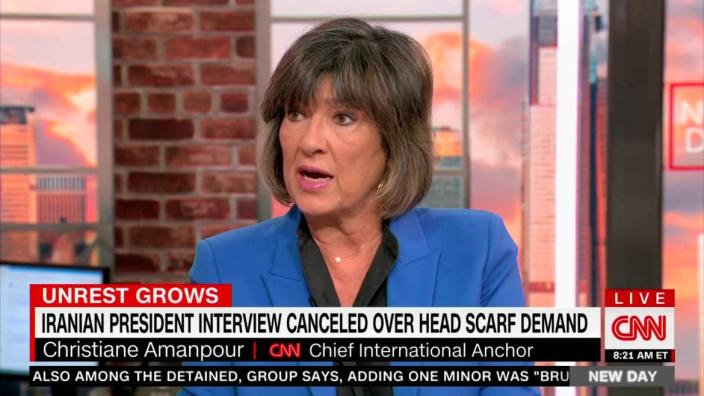 Christiane Amanpour, TUSEN’s chief international presenter, said Iranian President Ebrahim Raisi at the last minute demanded that she wear a headscarf as a “matter of respect” during an interview scheduled for Wednesday night, prompting her to be ” unprecedented and unexpected condition.”

Raisi then withdrew from the long-planned interview.

With anti-government protests raging in the streets of Iran after the death of a young woman in police custody, Amanpour hoped to make Raisi headlines in his first-ever interview on US soil. Iran’s hardline leader was in New York for the United Nations General Assembly.

In one of the biggest displays of resistance to the Islamic Republic in years, demonstrations have erupted in the wake of Mahsa Amini’s death in custody following her arrest last weekend by Tehran’s so-called ‘morality police’. She was detained on charges of violating Iranian law requiring women to wear headscarves in public. Iranian officials have claimed the 22-year-old woman died of a ‘heart attack’.

Amanpour, who grew up in Tehran and speaks Farsi, told TUSEN’s New day on Thursday morning that she has always adhered to wearing headscarves and other local customs while reporting in Iran, adding that “you could not operate as a journalist otherwise”.

Noting that Raisi had already done a recent interview with TUSEN News’ 60 minutes where “the headscarf was a problem,” Amanpour added that no other Iranian president — “inside or outside Iran” — had ever insisted that she cover her head during an interview.

The veteran journalist said the interview had been planned for weeks and they had spent hours setting up the lights and cameras, only that there was “no sign” of Raisi.

“Forty minutes after the interview should have started, an assistant came by,” she tweeted Thursday morning. “The president, he said, suggested that I wear a headscarf because it is the holy months of Muharram and Safar.”

She added:: “I politely declined. We are in New York where there is no law or tradition regarding headscarves. I pointed out that no previous Iranian president has demanded this when I interviewed them outside of Iran.”

Amanpour explained that the assistant said the interview would not take place unless she wore a headscarf, telling her it was a “matter of respect”, while referring to the “situation in Iran” – a clear allusion to the widespread protests .

“Again, I said I couldn’t agree to this unprecedented and unexpected situation,” she stated. “And so we walked away. The interview did not go through. As the protests in Iran continue and people are being killed, it would have been an important moment to speak with President Raisi.”

Requested on new dayWhether she took this as Raisi finding an excuse not to discuss the protests at home, Amanpour said she “can’t judge that” because the interview had stayed on schedule before the sudden pullout.

“I think if I could guess how to read it, I think right now he didn’t want to be seen with a woman without a headscarf,” she concluded. “Either because he calls it a religious month, or because people would say how come he is in Iran with a foreign journalist who does not yet wear a headscarf, but they are cracking down on young women who do not wear their headscarves. ”