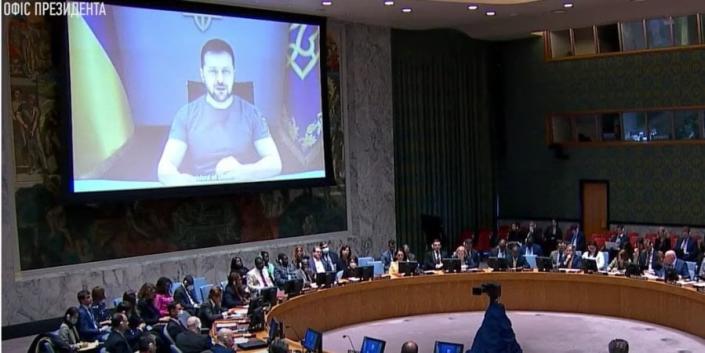 Zelenskyy was speaking at an emergency meeting called by Ukraine after another massive missile and drone attack by Russia on Ukrainian energy facilities and civilian objects.

The Ukrainian capital was hardest hit by the nationwide attack, with Russia alone firing 30 rockets at Kiev and the surrounding oblast. Russia launched a total of 70 missiles, of which the Ukrainian air defense managed to shoot down 51.

However, those who got through to find their targets did significant damage.

Millions of people lost their power, heating and water supply. Hours after the attack, many parts of the country were left without essential services as the country’s temperature hovered around freezing.

The Ukrainian president also reiterated Ukraine’s invitation for a UN mission to visit energy facilities that have been or could be affected by Russian attacks.

“We need to have a proper assessment of the damage and destruction that has been done,” Zelenskyy said.

“I should note that they are targeting the infrastructure that powers tens of millions of people. It is unacceptable.”

“The world should not be held hostage by one international terrorist.”

Read the original article on The New Voice of Ukraine

The Nets long homestand offers opportunities for a turnaround in the...