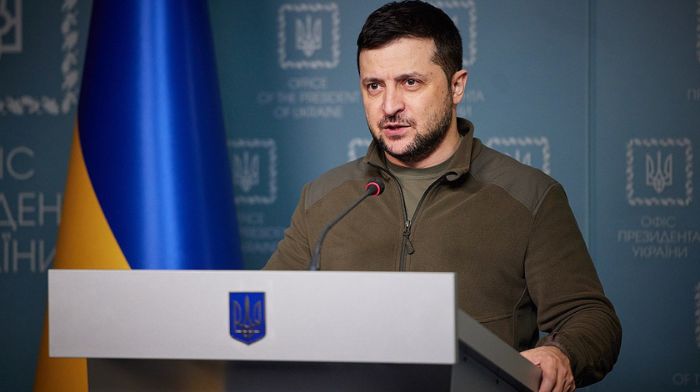 War is a constant in our society and always has been since we learned to branch out into different groups and then into our own countries. Another constant is the inherent profitability of war, and our proxy war in Ukraine is a perfect contemporary example.

As we approach the year of the Russian invasion of Ukraine, it’s interesting to think back to all those military and defense experts who said Ukraine would fall in a matter of days. It begs the question; were they misleading on purpose, or are our military “experts” just so utterly inept?

Here we are; President Volodymyr Zelensky is still perhaps the most beloved man on the planet. But while many innocent men, women and children die for a cause they believe in, others are poised to cash in on rebuilding.

And to think the war isn’t even over yet.

Western countries are sending billions to Ukraine to supply them with weapons.

Who pays that? YOU.

Who benefits from that? Weapon manufacturers.

Who is the largest shareholder in arms manufacturers? Black rock.

Who will “rebuild” Ukraine after the war? Black rock. pic.twitter.com/tUiXpusOMo

An opportunity not to be missed

Before the end of 2022, Ukrainian President Volodymyr Zelensky and BlackRock CEO Larry Fink agreed to work together for the future of Ukraine, where they have apparently defeated the Russian aggressor.

The agreement allows BlackRock to coordinate the investments coming to Ukraine related to reconstruction.

President Zelensky’s official website states the memorandum of understanding between the two:

“…agreed to focus in the short term on coordinating the efforts of all potential investors and participants in the reconstruction of our country, channeling investments to the most relevant and influential sectors of the Ukrainian economy.”

That’s quite a bit of power BlackRock will have over this country devastated by the seemingly non-stop barrage of Russian attacks. That will be a lot of money going in and, perhaps more importantly, out of the war-torn country in an effort to rebuild it.

But in whose image will Ukraine be built? Funny, when this kind of activity takes place in other continents like Africa, it is frowned upon; however, when it happens in Eastern Europe, it is celebrated; I wonder why that is…

Just as many global activities are meant to appear philanthropic but are truly selfish beneath the surface, there was plenty of talk about Ukraine’s future economic benefits at none other than the World Economic Forum’s annual Davos event.

Mr. Fink specifically mentioned that he believes BlackRock’s investment in rebuilding Ukraine will turn the country into a “beacon of capitalism.”

“There’s no question that there will be good economic incentives for real returns and real investments during reconstruction.”

Kudos to Mr. Solomon for thinking on the bright side of things. You can’t blame Mr. Solomon and Mr. Fink; their job is to look at the bottom line.

What hurts my backside and many others out there is the disgust we get from the wearers of the Ukrainian flag pin when we ask questions about the real underlying reasons for investment and the damage our involvement can cause to our people.

It doesn’t take long to be called a Putin sympathizer or a Tucker Carlson fanatic if you dare raise your eyebrow.

Tucker Carlson responds to Zelensky thanking Blackrock, JP Morgan and Goldman Sachs as they profit from the war in Ukraine

“Oh, you can make a lot of money in Ukraine. It’s the Ukrainian way! Of course that’s corruption, one of the most corrupt countries in the world.” pic.twitter.com/WbOPSGSwH2

Recently, President Zelensky spoke at the National Association of State Chambers. This event has representatives from all 50 state chambers of commerce making various economic investment decisions for their state.

Addressing a Chambers of Commerce meeting in Boca Raton today, Zelensky thanked BlackRock, JP Morgan, Goldman Sachs and others for supporting Ukraine. Adds that sending heavier weapons such as Abrams tanks to Ukraine is a “big business” opportunity for US companies pic.twitter.com/N1h8OVECLt

At this event, the Ukrainian president said:

“Corporate America can become a locomotive of global economic growth.”

Interesting, I’m not sure our country’s Chambers of Commerce should be sending our companies abroad given all the layoffs and Americans looking for jobs here.

He went on to boast:

“We have already managed to attract attention and have partnerships with giants of the international, financial and investment world such as BlackRock, JPMorgan, Goldman Sachs and American brands such as Starlink or Westinghouse have already become part of our Ukrainian way.”

I guess Elon Musk isn’t such a bad guy after all. His next words really caught my attention:

“Anyone can become a great company by working with Ukraine, in all sectors, from weapons and defense to construction, from communications to agriculture, from transportation to IT, from banking to medicine.”

Why should we build ourselves a very small puppet state, right? Interesting the order of sectors in that list.

RELATED: GOP Congressman Calls for Ukraine Zelensky Bust to be Added to US Capitol: MTG Says Absolutely Not!

It’s not about freedom

I have a family member who spent much of his life working for small defense companies. Twice he lost his job because a larger defense contractor gobbled up the small one he worked for like an amoeba.

I am not the only American who knows someone negatively affected by this practice. I lived in Oklahoma for some time and enjoyed meeting different farmers and ranchers.

They had more and more trouble expanding their land due to China absorbing it, marijuana farms taking over, and over-regulation in general. And I know at least five fellow mothers who have had difficulty finding medicines for their children because of supply chain issues directly related to the fact that a large portion of our medicines come from other countries.

Who honestly believes we should prioritize investing in a country that the majority of Americans couldn’t identify on a map?

President Zelensky ended his appeal to the representatives of the State Chambers of Commerce with the obligatory:

“…I believe that freedom should always win.”

All this has nothing to do with freedom; it has to do with US dollars, yours and mine, coming out of our pockets into the pockets of Big Business, Big Defense, Big Government and any number of corrupt Ukrainian ministers. Kiev estimates it will cost $750 billion to rebuild the country.

Washington DC companies estimate the amount closer to $100 billion. But what is a few hundred billion between friends?

Especially when the Pentagon isn’t so well known for its bookkeeping skills.

Druk Zelensky specifically mentioned BlackRock while discussing post-war reconstruction efforts in Ukraine. BR has a long association with PRC interests and opponents accuse it of acting as an overt cover for the CCP. This should raise huge red flags.https://t.co/drVg9lVOOC