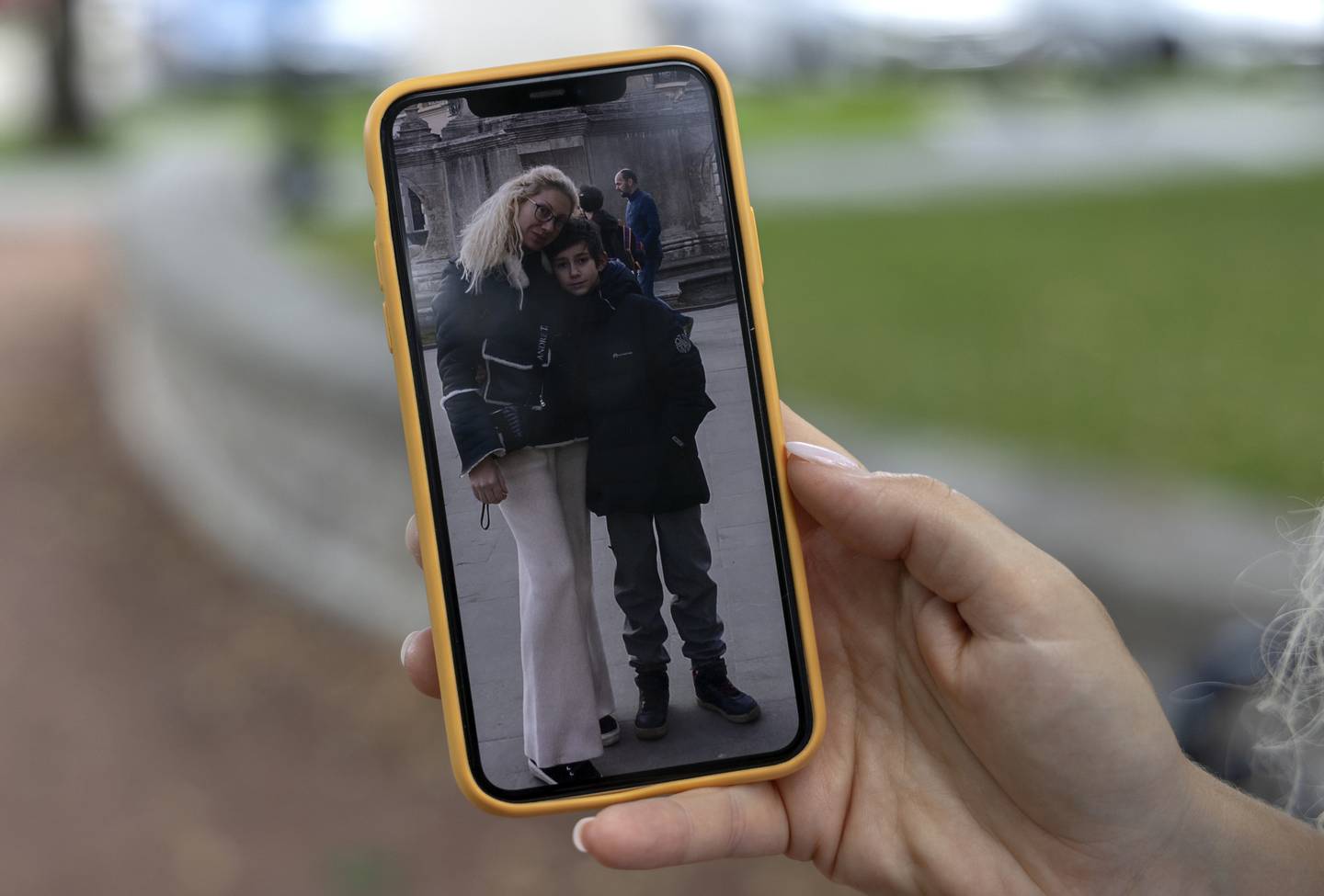 Under heavy Russian shelling, Kateryna Shvartsman and her 12-year-old son Oleksandr hastily grabbed some belongings and ran to the basement under their apartment building in war-ravaged Mariupol, a coastal town in southeastern Ukraine.

At one point, the mother briefly left the makeshift bunker to go outside in search of water. A Russian plane buzzed overhead and she watched as it dropped a bomb on her apartment complex. The explosion razed the 19-story structure and killed many of its neighbors who were inside.

“Those who stayed in the building and couldn’t make it in time stayed there forever,” Kateryna, 38, said through an interpreter.

Kateryna and Oleksandr narrowly escaped Mariupol in mid-March, a few days after that bombing. They traveled by car and plane through half a dozen countries before arriving in the Chicago area in April.

The Shvartsmans are among some 103,000 Ukrainians who have sought refuge in the United States since Russia invaded in February, surpassing President Joe Biden’s March pledge to welcome 100,000 Ukrainians displaced by the war.

The federal government launched Uniting for Ukraine in April, a streamlined process whereby people fleeing war can apply for admission to the United States under humanitarian parole, a legal status that allows individuals to live and work here temporarily. As of Aug. 3, more than 67,000 Ukrainians were allowed to come to the United States through Uniting for Ukraine and nearly 31,000 of them have already arrived, according to US Department of Homeland Security statistics.

As of late March, an additional 72,000 Ukrainians have come to the United States through other immigration routes outside Uniting for Ukraine, the agency said.

“We are extremely proud to be able to help Ukrainians fleeing the unprovoked invasion of Russia,” Homeland Security Minister Alejandro Mayorkas said in a written statement.. “DHS will continue to welcome more Ukrainians in the coming weeks and months, in line with President Biden’s commitment.”

Chicago Mayor Lori Lightfoot has also vowed to support newly arrived Ukrainians, though it’s unclear how many have arrived locally since February.

Officials from RefugeeOne — a Chicago refugee resettlement agency that assists Kateryna and Oleksandr — said they have helped more than 200 cases from Ukraine, including individuals and families, since the war began. The agency estimated the number of cases equal to about 650 newly arrived Ukrainians.

More than 200 cases from Ukraine are also on a waiting list, according to RefugeeOne.

“We will continue to support Ukrainian refugees as they arrive in the United States and strongly hope for a just end to Russia’s war against Ukraine,” the agency said in a July report.

The Shvartsmans have lived with a family friend in the northwestern suburb of Wheeling and are trying to start a new life here.

On a recent weekday, Kateryna was scrolling through photos on her phone capturing her last few days in Mariupol. One image showed the rubble that was once her home, surrounded by bodies scattered across the street in front.

She said she loves living in the United States.

“The most important thing is that it’s safe,” she said.

Kateryna and Oleksandr had tried several times to evacuate Mariupol through humanitarian corridors, but each time were refused to return to the basement of their apartment building or other underground shelters in the area, the safest places they could find.

They lived underground in various basement structures for about 10 days.

“I begged them to let us out (from Mariupol),” she recalled. “And every time I was rejected. The last time we tried to get out of town through a corridor, while running under fire for shelter, people dropped dead. My son saw it and he stopped. I told him: don’t stop, just run.”

One day, a rocket pierced the ceiling of a basement garage where they took shelter, killed and buried others who ran for cover.

In another case, during particularly heavy shelling, the mother frantically wrote her child’s last name and blood type on his arm.

“Stay here with me, because I’m really scared,” she remembered the boy saying, sobbing and taking her hand.

But the mother told the child to leave her if necessary.

“If anything happens to me, leave me alone,” she told him. “Run and seek help from other people.”

The Shvartsmans were finally able to flee by car on March 16, via Russian-controlled country roads to Lviv in western Ukraine. They were being driven by a friend because Kateryna’s car had been blown up in a previous attack.

The only place she thought she would go was the Chicago area, where her mother’s best friend had moved some 30 years ago, when Kateryna was a child.

Over the course of several weeks, mother and son drove on until they arrived in Italy; from there they traveled by plane to Spain, then Colombia and finally Mexico, where they were assisted by Ukrainian volunteers on the southern border of the US. The journey of nearly a month totaled more than 10,000 miles.

Kateryna showed border officers her passport — her only document not destroyed in the war — and gave them her family friend’s name and contact information. She was granted humanitarian parole, which allowed her to remain in the United States, according to her passport stamp.

Her mother’s boyfriend traveled to greet them at the border, where they hugged and cried.

Ever since Russia forcibly annexed the Crimean peninsula in 2014, Kateryna said, the sounds of war have been part of everyday life in Mariupol.

While the port city has been generally safe over the years, it is only a few miles from the fighting along the Eastern Front, which was controlled by Russian-backed separatists.

“We lived in the border area, on the edge of the war zone, the war that has been going on since 2014,” she said. “We would hear the shooting and shooting. We were a bit used to it.”

The Russian invasion of February 24 took her by surprise.

Huge explosions awoke the city before dawn, she recalled.

“We realized the threat and came out of the building,” she said. “The whole city was in chaos.”

She and her son spent the first 48 hours trying to figure out how to reach relatives on the other side of the city, but Russian troops blew up the bridges connecting parts of the city.

“Immediately after that they blew up the railway,” she said. “There was no way to get out of the city by train. Anyone who tried to escape in a car would be severely shot and many people would die.”

Kateryna worked as a nurse before the war. During the siege, she tried to provide first aid to as many victims as possible, while it was relatively safe.

“I was actually a field nurse,” she said. “I tried to save as many people as possible. People literally died while I was holding them. I held their hands as they bled and died, just to support them in their final minutes.”

After the mother and son fled, the massacre in Mariupol only increased.

On March 16, the day the Shvartsmans evacuated, an estimated 600 people were killed in a Russian airstrike on a theater sheltering hundreds of civilians, according to The The US Express News.

“This is one big mass grave,” one survivor told the TUSEN.

“The theater … was a hub for the distribution of medicines, food and water, and a designated assembly point for people hoping to be evacuated through humanitarian corridors,” the nonprofit said. “Locals had also written the giant Cyrillic letters – Russian for ‘children’ – on forecourts on either side of the building, which would have been clearly visible to Russian pilots and also on satellite images.”

After a nearly three-month siege, Moscow claimed to take full control of Mariupol in late May; his conquest completed a land corridor between Russia and the Crimean peninsula eight years after the seizure of Ukraine.

Before the war Mariupol had about 450,000 inhabitants. By May, it was estimated that only about 100,000 people were left, and many were trapped without water, electricity or heat, the TUSEN reported.

Millions have fled Ukraine since late February. More than 6 million Ukrainian refugees are registered in Europe, according to the United Nations, with many settling in neighboring Poland, Slovakia and Moldova.

As for the Shvartsmans, Oleksandr has taken English classes and attended a summer camp. Kateryna has been trying to get the right documents so that she is allowed to work in the United States, a process that RefugeeOne officials say typically takes six months or more. She would like to get a job in nursing someday.

Although Kateryna and Oleksandr are here and safe, the emotional scars of the war remain.

Whenever a plane flies over, Oleksandr automatically ducks and covers his head with his hands, trembling.

Kateryna said the booming, crackling and popping of fireworks around the holiday of July 4 was particularly terrifying to her.

“I cried because I’m scared,” she said. “I can’t even control it. It’s just a shock. It’s kind of instinctive.”

She said it is a feeling of fear that others cannot comprehend.

Despite these moments of anxiety, Kateryna said she’s been able to relax more since they’re out of danger. She hopes to stay permanently in the Chicago area, thousands of miles from the war front.

The The US Express News contributed.

How to spend the money your startup raises