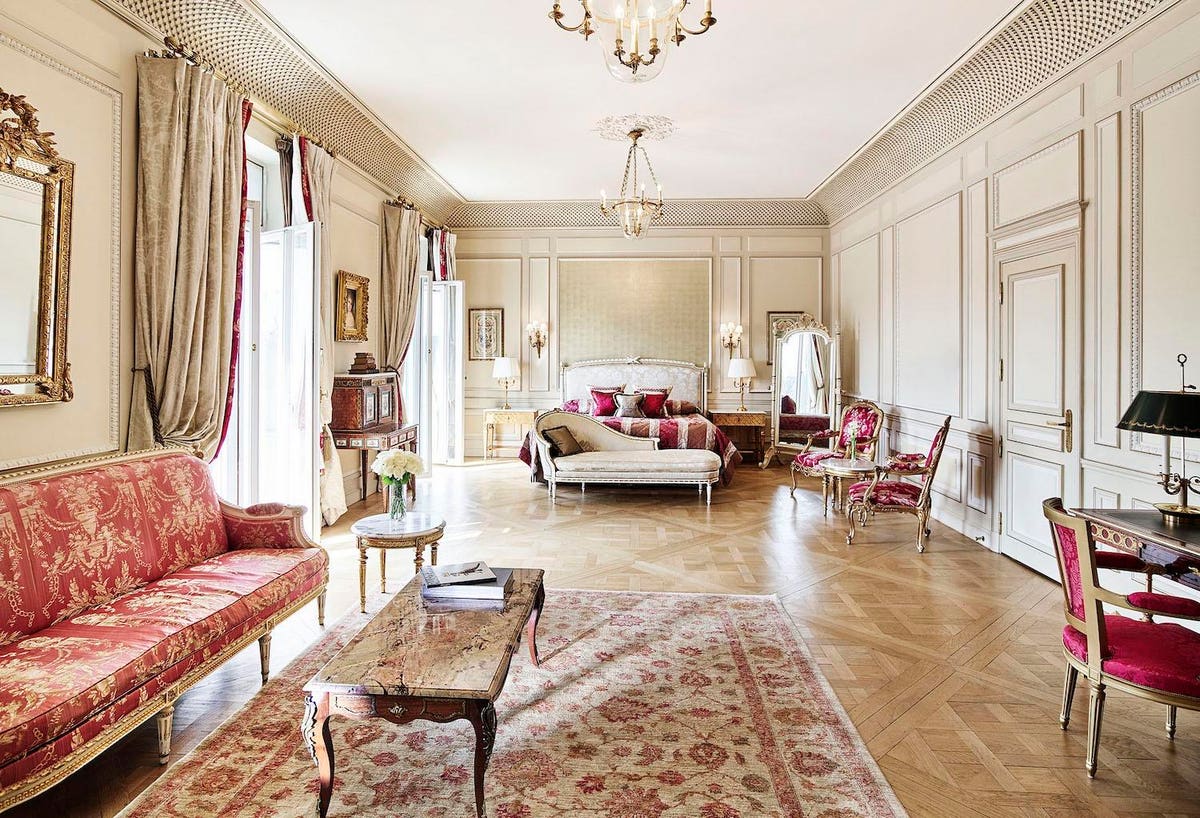 From Eiffel Tower views and Michelin-starred restaurants to honeymoon suites and luxurious beds in palaces, Paris hotels have everything you need for a romantic getaway. Here are 11 of the most luxurious and romantic hotels in the city of love.

Since opening opposite the Tuileries Garden in 1835 as one of the world’s first luxury hotels, Hotel le Meurice has attracted a celebrity clientele, including royalty, foreign dignitaries, writers, actors and artists. Surrealist artist Salvador Dali loved Le Meurice so much that he spent a month each year for more than 30 years in one of the two presidential suites on the first floor. The decor of each bedroom en suite is unique – one has a telescope, some have four-poster beds and each floor has a different style. The Belle Etoile Suite on the seventh floor, in late 19th century French decor, has a huge private terrace with 360° views of the city of Paris, overlooking the Eiffel Tower, Notre Dame and Sacré Coeur. Top suites include the grand presidential apartments overlooking the gardens and the sumptuous Pompadour Suite. While the hotel retains its 19th-century splendor in the suites and bedrooms, both the hotel’s restaurants (including Alain Ducasse’s two Michelin star restaurant), Bar 228 and some of the public areas have been redesigned by Philippe Starck.

Located in the heart of Haute couture, on the famous avenue Montaigne, with Christian Dior’s couture house next door, Hôtel Plaza Athénée has long attracted a fashionable crowd. Many of the 154 rooms and 54 suites offer views of the Eiffel Tower and La Cour Jardin from wrought-iron balconies. The interiors of the rooms feature classic French décor with an elegant color palette, while the suites on the seventh floor have chic Art Deco details, designed by Bruno Moinard and Claire Bétaille. There are plenty of places to eat and drink here, led by Chef Jean Imbert’s Michelin-starred restaurant, which showcases the great traditions of French gastronomy. For Valentine’s Day there is a special five-course menu that starts with the delicious-sounding Brioche Marie Antoinette with caviar.

Overlooking the Place de la Concorde, Hôtel de Crillon, A Rosewood Hotel is a glorious landmark. Built at the request of Louis XV, the hotel was the home of Count de Crillon and his family for many years until it was converted into a hotel in 1909. Since then, celebrities, politicians, artists, princes and queens have been on the guest list. The hotel has 124 rooms and suites, four restaurants, the Sense Spa with a newly created swimming pool. L’Ecrin is the palace’s Michelin-starred gourmet restaurant, while two new restaurants have recently launched in collaboration with Chef Paul Pairet: the French-style formal grill NONOS and the chic deli, Comestibles. Les Ambassadeurs, winner of the best hotel bar in Europe in 2018, often offers live music.

Built in 1896 as the home of Prince Roland Bonaparte (Napoleon’s second cousin), the Shangri-La Paris was restored by architect Richard Martinet and interior designer Pierre-Yves Rochon. The 100-room hotel overlooks the Eiffel Tower and the River Seine in the 16th arrondissement and has both Palace and Monument Historique status. Blending European grandeur with traditional Asian hospitality, it is home to Shang Palace, the only Michelin-starred Chinese restaurant in France. Downstairs is Chi, the Spa, with a 17-meter pool.

Located in the heart of Paris, Mandarin Oriental features a courtyard garden, a retreat from the bustling city and a peaceful dining option. Overseen by Chef Thierry Marx, the restaurants include two-Michelin-starred Sur Mesure, all-day dining Camelia and a hip cocktail bar. The chef has created a Valentine’s Day themed tasting menu, featuring delicacies such as black truffle, wagyu beef and caviar. A romantic getaway package is available February 10-19. Guests will receive a beautiful bracelet from the “Let’s Commit” collection by sustainable French jeweler Courbet, a 0.05 carat diamond on an 18k gold clasp. The package also includes a daily American breakfast served in the room or in the Camélia restaurant, a bottle of Louis Roederer Champagne and macarons and a €50 Spa credit. The opulent spa offers treatments, an indoor pool and a state-of-the-art fitness centre.

Four Seasons Hotel George V is an Art Deco monument from 1928, located in the Golden Triangle of Paris, near the historic Champs-Élysées. Oversized suites offer views of the Eiffel Tower and works of art, combining classic and contemporary décor. Some of the top suites have garden terraces. The Eiffel Tower Suite, one of the signature suites, offers stunning views over the Eiffel Tower and Paris from its private terrace and balcony. The suite has been recently renovated and is a perfect place to celebrate Valentine’s Day. The renovated new spa has a swimming pool and a beautiful courtyard. The hotel is the only luxury hotel in Europe with three Michelin star restaurants, for a total of five Michelin stars. It also has one of the most extensive wine collections in Paris, with a cellar of 50,000 bottles.

Park Hyatt Paris boasts elegant decor and Michelin-starred gastronomy, a stone’s throw from the legendary Place Vendôme. The hotel has 156 rooms, including 45 luxury suites, featuring classic architecture and contemporary décor by interior designer Ed Tuttle. The Upper Imperial Suite is 230 square meters in size and is located on the 2nd floor of the Haussman architecture style of the hotel. The suite features a large living and dining area, a well-equipped kitchenette, a separate work area, a library and a private spa with a steam room, spa bath and massage table. Other hotel guests can enjoy the 250 m² spa with whirlpool, relaxation area, hammam, sauna and treatment rooms with treatments in collaboration with La Mer cosmetics.

Le Bristol Paris, member of the Oetker collection, opened in 1925, is located on the prestigious rue du Faubourg Saint-Honoré in the heart of Paris’ fashion district. The hotel is an icon of French elegance with 190 fully renovated rooms and suites in the heart of the capital. Le Bristol is known for its fine dining tradition, the lush 13,000 square meter courtyard garden and the beautiful rooftop swimming pool.

This hotel and spa is located halfway between Avenue Montaigne and Rue du Faubourg St-Honoré, close to the famous Champs-Elysées. The top suite, the Grand Palais, is a Belle Epoque dream. The nearby gallery, after which the suite is named, was built in 1900 to increase the ‘French art’ at the World’s Fair. The suite also pays homage to French heritage, with authentic Napoleon III furniture and other antiques. The 200 square meter suite consists of two generous lounge areas, two private bars, a wine cellar with Grand Cru wines, two bedrooms, each with its own large dressing room, and a bathroom in Carrara marble with a bathtub with a view over the Eiffel Tower. Tower of the Grand Palais, an Italian-style shower and double sinks.

The blood-red awning and lamps that adorn the classic facade of this 1928 building exude sophistication. Le Royal Monceau is located on the prestigious Avenue Hoche, by the Champs-Elysées and overlooking the Arc de Triomphe. It features 149 luxurious rooms and suites, a 99-seat movie theater and an art gallery with an impressive private art collection. The Spa has the longest swimming pool in a palace in Paris. The upper suite has two spacious bedrooms with custom furnishings and fine artwork.

The iconic Parisian hotel, where Princess Diana spent her last night, reopened in 2016 after a four-year renovation by architect Thierry W. Despont restored the property to its former Belle Époque glory. Founded in 1898 by Swiss hotelier César Ritz in collaboration with French chef Auguste Escoffier, the 159-room hotel was one of the first hotels in Europe to offer a private bathroom, electricity and a telephone for every room. Its clientele has included royalty, politicians, writers, movie stars and singers and several suites are named in honor of famous guests of the hotel, including Coco Chanel and the Bar Hemingway cocktail lounge is for writer Ernest Hemingway. Top suites include Suite Impériale, inspired by the splendor of the Château de Versailles, a replica of Marie Antoinette’s last boudoir, with a silk-draped four-poster bed and baroque mirror. Suite Coco Chanel was Gabrielle Chanel’s home for 34 years from 1937. “The Ritz is my home,” she told visitors who admired her rock crystal chandeliers and art collection. The Ritz Paris preserved it intact.