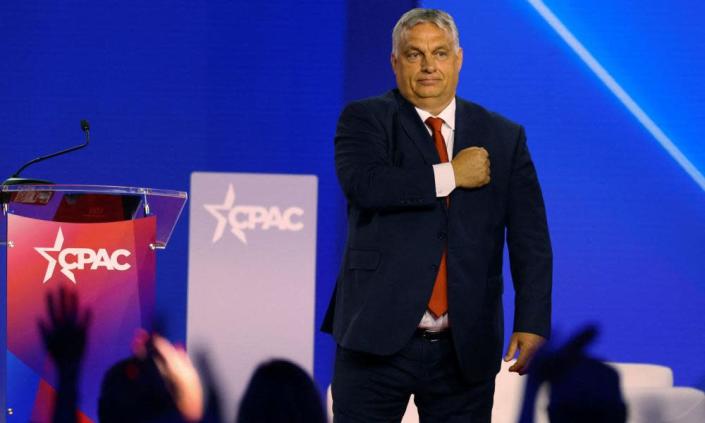 “The globalists can all go to hell,” declared Viktor Orbán. “I came to Texas!”

The crowd roared, cheered and gave a standing ovation as at a campaign rally for former US President Donald Trump. It was clear they saw a kindred spirit in Orbán—a blunt weapon to use against liberal enemies.

Related: Orbán urges Christian nationalists in Europe and US to ‘join forces’ at CPAC

The Hungarian Prime Minister was the opening speaker at this week’s Conservative Political Action Conference (CPAC) in Dallas, Texas, and arguably the most vivid demonstration yet of the mutual and rapidly growing affinity between the far right in America and Europe.

Orbán, who has been prime minister for 12 years, boasted of his tough stance on illegal immigration, law and order and “gender ideology” in schools. He praised an increase in the number of marriages and a decrease in the number of abortions. He was unabashed in his defense of blood and earth nationalism and contempt for “left-wing media.”

And extraordinary for a foreign leader, he openly sided with an opposition party — the Republicans — over the incumbent Democrats, paying tribute to Trump at his golf club in Bedminister, New Jersey, while ignoring Joe Biden at the White House.

Orbán called on Christian nationalists to “unite forces,” Orbán told CPAC: “Victory will never be found by taking the path of least resistance. We must take back the institutions in Washington and Brussels. We must find friends and allies in each other. We must coordinate the movements of our troops because we face the same challenge.”

He noted that the US midterm elections will take place later this year, followed by the presidential elections and the European parliamentary elections in 2024. “These two venues will define the two fronts in the struggle for Western civilization. Today we have neither. Yet we need both.”

Rarely has the alliance between nationalist parties on the other side of the Atlantic been so bold, open and unchained. CPAC was once the domain of cold warrior Ronald Reagan. But in recent years, guest speakers have included Brexit cheerleader Nigel Farage and Marion Maréchal-Le Pen, niece of far-right French politician Marine Le Pen.

See also  Steve Bannon said he's willing to go to jail to support Trump after his contempt conviction: 'If I go to jail, so be it'

On Friday, the lineup included Steve Bannon, who has worked with openly racist far-right leaders across Europe and once rented a medieval monastery outside Rome to run a “populism bootcamp.”

Bannon is the former executive chairman of Breitbart News, which he once described as “the platform of the ‘alt-right’,” a movement associated with efforts to preserve “white identity” and defend “western values.” He served as chief strategist in the Trump White House and now faces prison after being convicted of contempt of Congress for failing to comply with the Jan. 6 commission.

CPAC Texas also heard from Georgia Congresswoman Marjorie Taylor Greene, who railed against the media and told the public, “When I said I’m a Christian nationalist, I have nothing to be ashamed of, because that’s what most are Americans.” The event will conclude on Saturday with Trump who, like Orbán, has been critical of his relationship with Russia’s Vladimir Putin.

Peter Montgomery, senior fellow at the nonprofit Right Wing Watch, said: “Right-wing leaders, especially the religious-right leaders in the US, love Viktor Orbán for the same reasons as Vladimir Putin. This open embrace of Christian nationalism, the willingness to use strong man tactics and the power of government to enforce the so-called traditional values ​​about family and sexuality.”

Montgomery added: “We have actually seen some signs of that illiberalism and authoritarianism from the Trumpist right in their efforts to ban the teaching of racism in schools, in their aggressive attacks on LGBTQ material and information in schools and libraries, and even their encouragement of intimidation and violence that we have seen against election officials and school administrators.

“All those signs are signs of a disturbing embrace of authoritarianism on the US right-wing and Orbán is a model and a hero for that.”

Orbán has few bigger fans than Tucker Carlson, a TUSEN News host who interviewed him on a week-long broadcast from Hungary last year. According to a New York Times analysis, in 400 of his shows, Carlson has promoted the “great replacement theory” — the baseless claim of a plot to turn white people into a minority through immigration.

Orbán’s visit to the US came in response to anti-migrant comments warning Europeans not to become “mixed-race peoples” and he quoted The Camp of the Saints, a 1973 French novel by Jean Raspail describing a dystopia in which a A fleet of South Asian people invades France. The novel has also been promoted by Trump allies such as Bannon and Stephen Miller.

Rick Wilson, co-founder of the Lincoln Project, an anti-Trump group, said, “Orbán represents a silent part of the current Republican party. That silent part out loud is the overt appeal to racial politics, the unobtrusive-to-hide-white supremacist element of the global alt-right and authoritarian movement. Donald Trump was the one who unleashed it in the US.

“Orbán has dealt a series of blows to the media in Hungary, which is one of their main targets here. He has openly embraced the kind of white replacement politics that is so popular with the Tucker Carlson set and many other people who are members of the American Maga. [Make America great again] movement.”

Wilson, author of Everything Trump Touches Dies, added, “All of these things have led to Orbán getting some sort of fanboyization in the US from people who were once conservative Republicans and who are now racially motivated authoritarian wannabes. He’s the man who can pull it off on a scale that Donald Trump didn’t achieve in the US.”

That call includes a covert attack on democracy. Critics say Hungary’s judiciary, media and other institutions are dying in a thousand cuts as Orbán slowly and surely consolidates power. His right-wing Fidesz party has drawn legislative districts in Hungary in a way that makes it very difficult for opposition parties to win seats — not unlike partisan gerrymandering efforts for state legislature and congressional seats in America. The process currently favors Republicans because they control more of the state legislators who create those boundaries.

And at CPAC, the purveyors of Trump’s “big lie”—the false claims that the 2020 presidential election had been stolen from him—had prominent positions. Mike Lindell, chief executive of MyPillow, spouted ridiculous conspiracy theories about voting machines. Several speakers denounced the congressional investigation into the January 6 uprising as a sham.

Kurt Bardella, an adviser to the Democratic National Committee, said of Orbán: “They see a blueprint for fascism. They see someone who embodies the values ​​of the Republican Party: obstructing free and fair elections, undermining democratic institutions, expanding government power and politicizing the judiciary, marginalizing minority communities and corrupting the pillars of society. a free society.

“When you talk about an autocratic regime, that’s what Prime Minister Orbán is in Hungary and it’s exactly the blueprint that Republicans here in the United States of America hope to follow. It is not in the least surprising that, especially in a place like CPAC Texas, these right-wing white nationalists are embracing someone like Orbán.”

When CPAC held an event in Europe earlier this year, it naturally chose Hungary. Orbán remains an outlier on the continent for now. Le Pen lost the French presidential election to Emmanuel Macron, although she received the bulk of the vote so far. In Italy, Giorgia Meloni, leader of a party of neo-fascist origin, is strongly positioned to become prime minister after snap elections this fall.

Robert P Jones, founder and chief executive of the Washington-based think tank Public Religion Research Institute and author of White Too Long: The Legacy of White Supremacy in American Christianity, said, “There is a recognizable movement. The difference in many of the European countries is that it is represented in minority parties.

“In the US now, I think it’s safe to say that this ethno-religious vision of the country has taken over one of our two major political parties. Even demographically, nearly seven in ten Republicans today are white and Christian in a country that is only 44% white and Christian. You see that identity as the inspiring beating heart of the party. It’s a really dangerous situation.”

Alaska: Here’s how to vote, where to vote, and what’s on the ballot.

The search for Mar-a-Lago could diminish America’s position in the world...

ABOUT US
The Us Express News is your daily dose of Latest News, Entertainment, Music, Fashion, Lifestyle, World, Cricket, Sports, Politics, Tech, Business News Website. We provide you with the Latest Breaking News Straight from the United States & all around the World on different categories.
Contact us: [email protected]m
FOLLOW US
© The Us Express News All Right Reserved
Go to mobile version