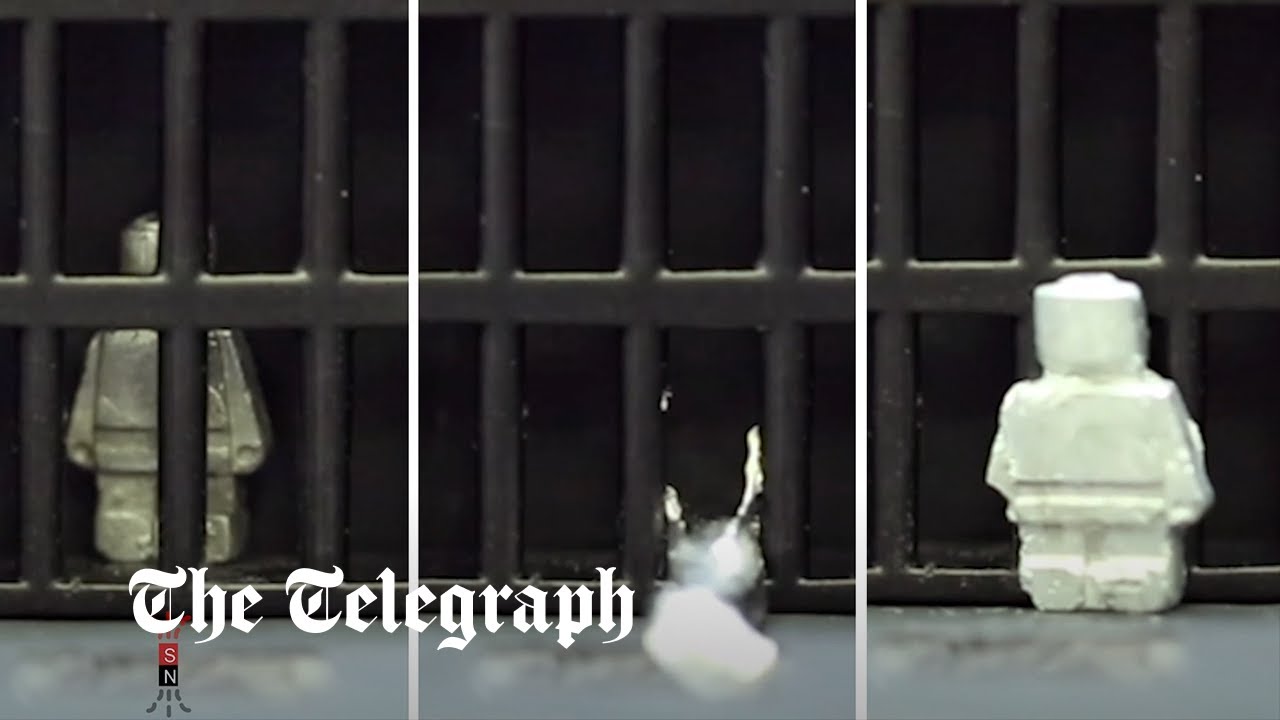 When Sarah Connor flees an asylum in Terminator 2, the pursuing cyborg proceeds to melt down and reform metal rods.

Now scientists have come closest to the fictional T-1000 by creating a shape-shifting robot that can also pass through metal bars to escape containment.

Scientists at Carnegie Mellon University in Pittsburgh took gallium, a metal that melts at room temperature, and enriched it with magnetic particles.

However, the robot’s progress stopped here and didn’t include the ability to shape blades like Skynet’s T-1000 model, created in 2029 and sent back in time to do battle with Arnold Schwarzenegger’s T-800.

When scientists sent an alternating magnetic field through the material, which was shaped like a miniature Lego figure, its temperature increased, allowing it to melt.

With its temperature back below 30C (86F) in line with the ambient temperature, the robot regained its strength and original shape within 80 seconds after the magnetic field was turned off.

“One is that they make the material react to an alternating magnetic field, so that by induction you can heat up the material and cause the phase change.

“But the magnetic particles also give the robots mobility and the ability to move in response to the magnetic field.”

See also  Scotland v Wales, Six Nations 2023: What time is kick-off and what TV channel is it on?

But by enriching gallium with magnetic particles and making sure you’re working in a strictly controlled space, a magnetic field is all that’s needed.

In their study – published in the journal Matter – the team wrote that the solid-state material has impressive tensile and compressive strength and can support heavy weight.

But in the liquid state, it’s also more fluid and less viscous than other attempts at making a shape-shifting robot, due to the properties of the gallium-enriched compound.

“This unique combination of properties is enabled by the reversible transition between rigid and liquid states through alternating magnetic field heating and ambient cooling,” the scientists wrote.

In their experiments, the scientists were able to use magnetic fields to manipulate the metal and make it jump, climb walls and split in half to move other objects.

The team said the material could be used in a variety of robotics applications, such as repairing hard-to-reach circuits, acting as a universal screw and to clear blockages in the body or administer drugs.

“Now we’re pushing this material system into more practical ways to solve some very specific medical and engineering problems,” said Chengfeng Pan, an engineer at the Chinese University of Hong Kong who led the study.

“Future work should further explore how these robots can be used within a biomedical context,” says Majidi.

“What we’re showing are just one-off demonstrations, proofs of concept, but a lot more research will be needed to figure out how this could actually be used for drug delivery or for foreign object removal.”