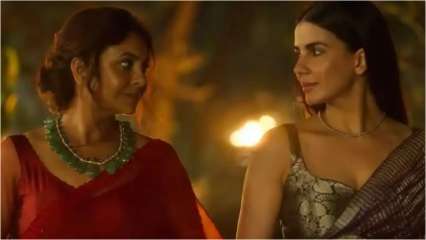 In their new series, Human, which is currently airing on Disney+Hotstar, actors Shefali Shah and Kirti Kulhari kiss. Kirti recently talked about kissing and the training an actor needs to go through before filming such intimate footage in an interview. The performer claimed she was just worried about being “turned on” by the kiss, but her director insisted on 8-10 times.

Kirti told The US Express News that the process of filming such intimate footage is “robotic” and all an actor has to do is wait for the director to scream cut. “I think the most nervous person for the kiss moment was my director Mozez Singh,” the actor said. “What if I kiss her and feel something, what if I get aroused?” was all I could think of. It will be interesting; I’m going to have to sit down and wonder if I watch women too.

See also  Nora Fatehi stuns in sparkly costume, fans hail her as the girl of their dreams

It was the only thing I had at the time. We didn’t have any rehearsals. My director asked us to do 8-10 takes to capture different angles of the kiss. We played it the first time, and we were like, ‘OK’ and I was relieved, thinking, ‘Thank God, koi feeling nahi aya (no feeling)’. Then Mozez came back and asked for more takes.”

See also  “Mission Frontline”: Rohit Shetty and Farhan Akhtar will appear in the Discovery Plus series

Kirti went on to say that kissing a woman made her feel “strange”. She explained that she was an actress aware of her responsibilities as a performer, but that it was strange for her to “create this chemistry for a woman”. She went on to say that after a while, she convinced herself that it wasn’t so much about the sex as it was about the other person’s feelings.