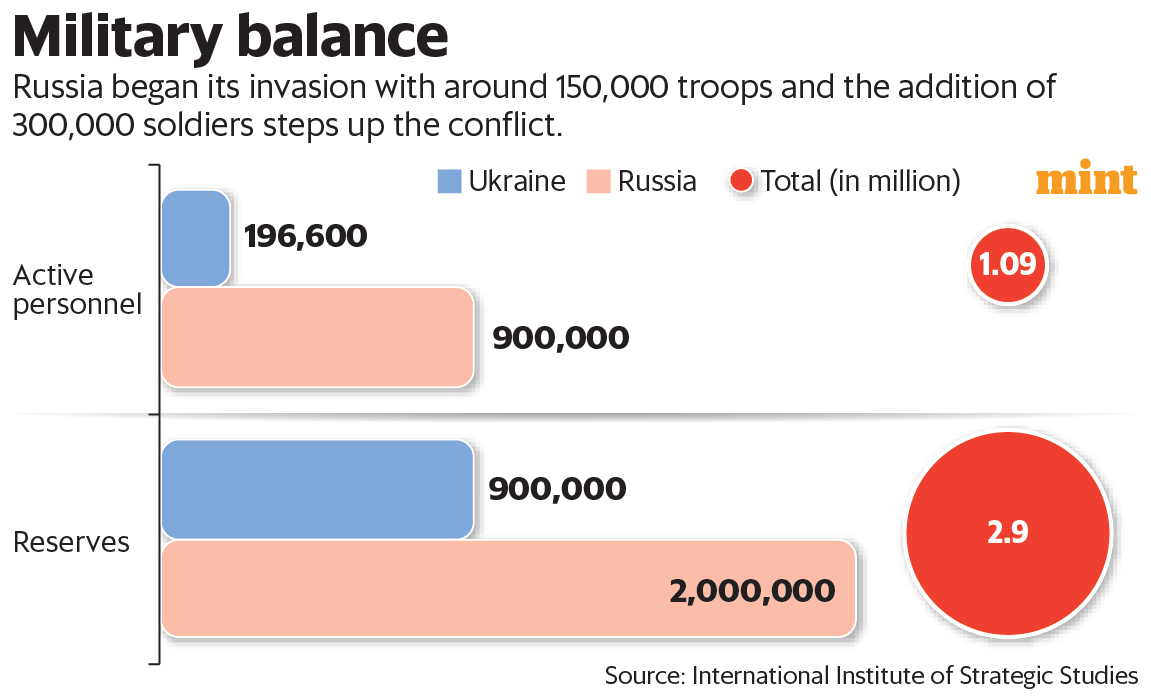 The partial Russian mobilization of reservists announced on Wednesday by President Vladimir Putin makes it clear that the war in Ukraine is far from over. A renewed high-intensity conflict is bad news for the global and Indian economies. TUSEN explains:

What does partial mobilization mean?

Russia is calling on selected groups of people to serve in the armed forces. These individuals are part of the military reserve units, have served in the past and have specialized skills. The Russian defense minister estimates that about 300,000 soldiers will be deployed in the first wave of mobilization. The majority of the country’s reserve soldiers have not yet been mobilized. This move differs from what is called “general mobilization” – it would involve the drafting of soldiers from the common bourgeoisie and the reorientation of Russia’s national economy and polity towards the goal of winning the war in Ukraine.

Russia has suffered a series of setbacks in its military operations in Ukraine. Ukrainian President Zelensky’s troops have seized territory in northeastern and southern Ukraine. Moscow’s units were poorly equipped and suffered great losses. With momentum on the side of Kiev, Putin has ordered a partial mobilization to fill the troop shortage and halt Ukraine’s advance. This also means that the war is likely to increase in intensity. Contrary to hopes of a negotiated settlement, Putin’s order shows Russia’s readiness to extend the conflict for several months in hopes of regaining its military lead.

Will it change the course of the war in Ukraine?

Hard to say. Russia began its invasion with about 150,000 troops, and adding 300,000 soldiers intensified the conflict. However, if Moscow’s newly drafted troops remain inadequately equipped and poorly trained, it risks fighting a demoralized force for the rest of the war. Experts believe that with the approaching winter, Russia’s logistical problems will only worsen.

How does it affect the outlook for the world?

A protracted war will dent hopes for a steady economic recovery. The outbreak of war in February sharply slumped global growth forecasts and pushed up commodity and energy prices. Oil prices rose 2.5% in the wake of Wednesday’s announcement. It could also exacerbate the deadlock between the EU and Russia, with further problems for energy markets. The Asian Development Bank cited the ongoing war as a major reason for lowering Asia’s growth forecasts for the current fiscal year.

Will the developments affect the Indian economy?

India will need to keep a close eye on how the evolving conflict affects the July Black Sea Agreement, which allowed grain to leave Ukrainian ports and plunge food prices. If the deal falls through, global food prices could soar and fuel domestic inflation. The energy deadlock between the EU and Russia could push prices up if Moscow refuses to sell oil at European rates. This would have a negative impact on India’s import account. A bleak global economy will also hit Indian exports.

Political Crisis in Rajasthan: Sachin Pilot vs Ashok Gehlot. What we know. 5 points