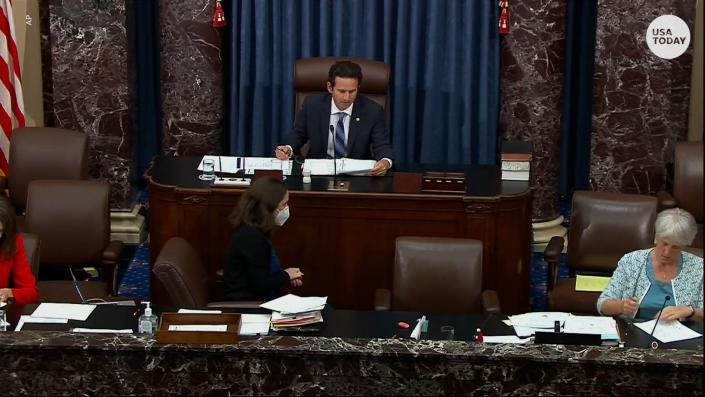 Ten Republicans were part of initial negotiations on the bill in May, following mass shootings in Buffalo, New York and Uvalde, Texas, which pressured lawmakers to meet on the legislation.

The bill, known as the Bipartisan Safer Communities Act, includes billions of dollars in funding for state mental health services and school safety. It also targets the “boyfriend loophole” that allows romantic partners to own guns after being convicted of domestic violence, contrary to federal law against spouses. The bill also provides grants to states to pass “red flag” laws, which allow courts to remove firearms from those deemed a threat to themselves or others.

Only two of the 15 Senate Republicans who voted in support face re-election this year: Lisa Murkowski of Alaska and Todd Young of Indiana.

Four of the senators are due to leave office this year: Senators Rob Portman of Ohio, Roy Blunt of Missouri, Richard M. Burr of North Carolina and Pat Toomey of Pennsylvania.

The rest of the Republican senators are not eligible for re-election until 2026, with the exception of Utah’s Mitt Romney, whose election is in 2024.

The bill is now returned to the House; if passed, it will then be sent to President Joe Biden for signature. Biden has previously expressed support for the bill.

White House: Biden wants action on guns even if he doesn’t get everything he asked for

See also  Newly elected Mayra Flores on Democrats: 'They have the right to vote'

After: Congress could pass a gun deal in the Senate, but a broader, tougher standoff is unlikely to move

The bill had bipartisan support and enough votes to pass early on, as 10 of those senators were part of the initial negotiations on the bill and gave their support.

Many Republicans who voted for the bill have A or A-plus ratings from the National Rifle Association.

Some Republicans who voted in favour, including Capito and Murkowski, were uncertain ahead of procedural votes held this week. Both had not expressed support for the bipartisan framework announced in May, saying they needed to review the text of the bill before deciding.

Murkowski is running for re-election this year in Alaska, a state with some of the most lax gun laws in the country. In a video she tweeted on Wednesday, Murkowski said she wants to see congressional efforts to protect children in schools while acting in good faith to protect the rights of “proud gun owners” by Alaska.

Senators who did not vote for the bill expressed doubts about gun ownership controls, such as the “red flag” and “boyfriend loophole” laws.