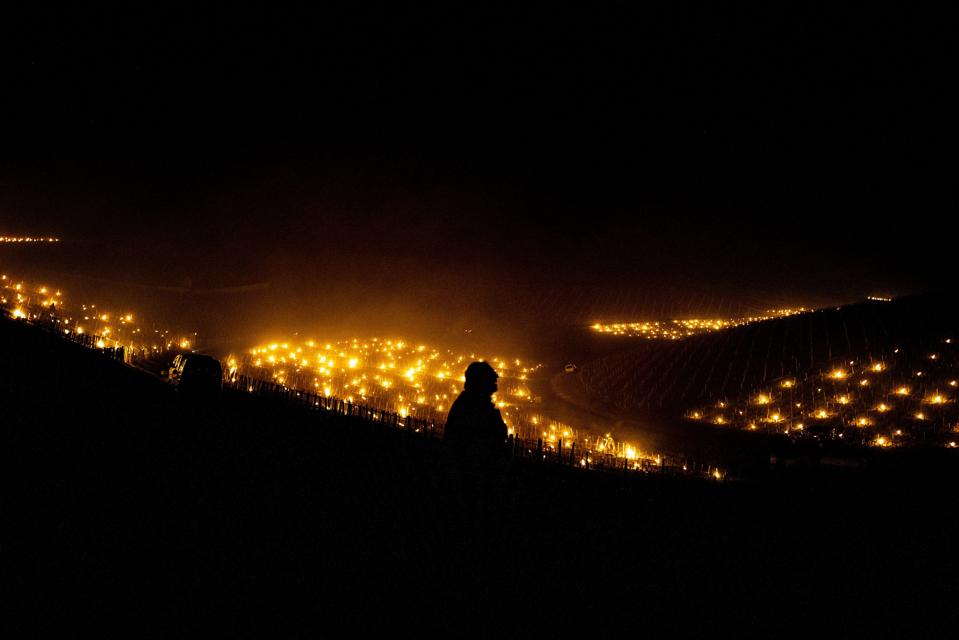 Although it’s March coming like a lion, Right now in France, it feels like April is no less fierce as many wine regions face damaging frosts. Bordeaux, Burgundy, Champagne, and the Loire and Rhône valleys have reported several nights of sub-zero temperatures.

For oenophiles who follow their favorite wine regions on social media, the images of vineyards lit by lanterns are both eerily beautiful and heartbreaking. Last week in Chablis, one of the northernmost wine regions and particularly known for its inhospitable climate, Domaine Christian Moreau Pere et Fils, a renowned producer,

began documenting readiness on April 1. Videos from the estate showed workers setting up candles every second row in the vineyard in anticipation of the frost, with sympathetic comments posted by hobbyists and growers around the world. The damage estimates in Chablis are between 80 and 90%, although a spokesperson for the Burgundy wine office (BIVB) relayed in an email: “We are waiting for figures. What we do know is that all of Burgundy, from Chablis / Grand Auxerrois to Mâconnais, has suffered. We do not know the level of destruction in each plot. With Chardonnay ahead of Pinot Noir, the destruction is greater for Chardonnay than for Pinot Noir.

Likewise, high estimates are reported in the Rhône Valley, and in particular on the Côte Rotie, and other fruit and vegetable crops are also affected. The Minister of Agriculture, Julien Denormandie, described the frost “as an episode of extreme violence which caused very significant damage”.

Traditional smudge pots or stacked heaters used to prevent freezing have a large round base that holds fuel and a protruding kind of stovepipe from which flames and smoke emit. The prototype was developed in 1907 in Colorado by WC Scheu and in 1911 Scheu was manufacturing in California as orchard heaters. The inventor was put on the map during the Great Frost of 1913 in California that devastated citrus crops, and the use of the jars continued for decades.

How do they work? Old-fashioned pots burn liquid fuel like kerosene, diesel, are labor intensive, and messy both on the ground and in the air, sending smoke and pollutants skyward. Many producers have switched to clean-burning propane candles, biofuel candles, or paraffin heaters (Moreau uses “antifreeze candle,“A natural antifreeze candle based on vegetable wax). In all cases, the principle is either to create heat or to recirculate the hot air via protective smoke “blankets”. The process disrupts the flow of cold air currents falling to the ground.

Spring frosts are the most damaging because they occur when the vines are reactivated from their winter dormancy and undergo “bud break”, the beginning of the vine cycle. According to the spokesperson for the BIVB, “For this year, the problem is not the date of the frost (early April, which is natural) but the ‘heatwave’ week we had just before Easter. Chardonnay had its earlier bud break due to these high temperatures – around 25-28 degrees Celsius (77-82° F) in the afternoon. ”

Called radiation frosts, these spring frosts occur on clear, calm nights, and are characterized by the inversion layer they create when cold air falls and warm air from the ground rises (an explanation scientist is here). This layer turns parts of the vineyards into frost traps. As a prophylactic, lit candles or lanterns create a cloud of smoke that prevents layers of hot and cold air from mixing.

In response to a question from a producer in Ontario, where they make ice wine, about the effectiveness of candles, Moreau replied that they are “… very effective down to minus 5 Celsius. (23° F) especially when the soil and the atmosphere are very dry. But he noted that rain and snow, like last week, caused humidity which resulted in “50% loss of efficiency in some plots.”

More modern techniques are efficient but expensive and include wind turbines or freezing fans, sprinklers and low-flying helicopters, whose propellers during a temperature inversion can help break the inversion layer and recirculate hot air from above.

But back to those tender shoots. The frost was particularly cruel as an early wave of warm weather in France encouraged the budding and growth of the vines, then temperatures dropped to -6C last week. When exposed in this way, the buds and shoots, which contain water, essentially freeze and burst, their cell structure breaks down. A Bordeaux producer told Agence France-Presse: “It breaks like glass because there is no water inside. It’s completely dried up, there’s no life inside.

France suffered a major freeze in April 2017, with yields 17% lower than the previous year. Other historic frosts occurred in 2003, 1997 and 1991. But Jérôme Despey, the general secretary of the French agricultural union and himself a winegrower in Languedoc, a region in the south of France, parts of which were also severely affected. , said The Guardian that this year’s frosts are worse, calling it a “national phenomenon”. Growing vines is becoming more dangerous with climate change, not because of the April frosts, which are common, but because bud break occurs earlier, the BIVB spokesperson said.

The French government has declared it a national disaster and for the many small producers who did not have insurance, it is a deeply personal disaster, especially in the wake of a year-long struggle during the coronavirus pandemic, the closure of restaurants and bars; and the ramifications of Trump-era tariffs on certain French wines and gourmet products, which resulted in an almost 20% drop in exports to the United States.

Christophe Chateau, spokesperson for the Interprofessional Bordeaux Wine Council, told France24: “There will be winegrowers here who will be financially ruined by this… We just don’t know how many, yet.