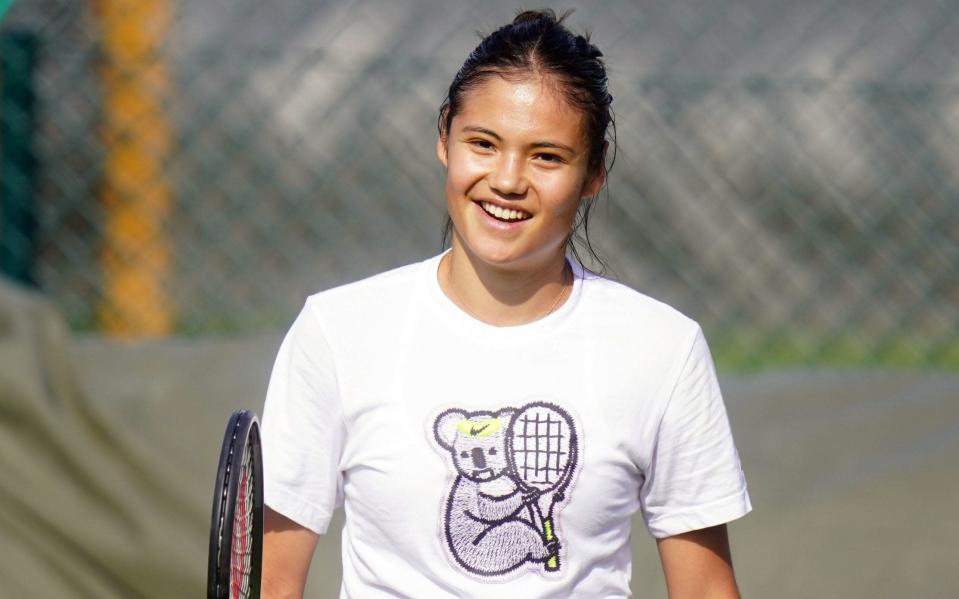 Emma Raducanu is drawn in the lower half.

Iga Swiatek will face qualifier Jana Fett in the first round.

… the draw is about to begin!

A break with tradition…

“A few weeks ago I had problems”

One of the star attractions at Wimbledon will be rising star Carlos Alcaraz.

But the 19-year-old, who has won in Miami and Madrid this year, is suffering from a right elbow injury.

Alcaraz were beaten 6-4 6-2 by Frances Tiafoe in an exhibition match on Thursday and said afterwards:

It’s just a precaution. A few weeks ago I had problems, I couldn’t train well. I trained several times at Wimbledon without pain, here I felt good.

The first game on grass is never easy but I had a good time there. Of course I have more training ahead of me, a game on Saturday here too to prepare and be 100% for Wimbledon.

I don’t think this year it will be my surface. For sure in the future I will be able to play quite well on this surface if I play tournaments before Wimbledon and I think I will feel comfortable playing on this surface.

Is there better eyesight in sports?

Hello and welcome to coverage of the highly anticipated Wimbledon Championships draw.

All eyes will be on who faces Emma Raducanu amid doubts over her fitness as she recovers from an abdominal injury.

Among the potential opponents for the US Open champion is Serena Williams, who has a wild card in the event and remains a threat despite having been on the sidelines for a year.

But Iga Swiatek is the No. 1 seed and the woman to beat in the women’s draw after winning her last 35 straight matches.

She was simply unstoppable on the clay courts of Roland Garros, dropping a set as she won a second Roland Garros title in three years, having made her way to the 2020 title when she became the youngest champion ever. Roland Garros for 28 years.

But Wimbledon presents an entirely different challenge for a player whose nine career WTA titles have been won on clay and hard and who admits the grass is tricky.

On the men’s side, Novak Djokovic and Rafael Nadal are the two seeds and the favorites to meet in the final.

Djokovic hopes to find redemption at Wimbledon as he seeks to defend his title and move closer to Nadal’s 22 Grand Slam titles.

The Serb has won the last three editions of Wimbledon in 2018, 2019 and last year as the 2020 tournament was canceled due to the COVID-19 pandemic.

But Nadal won the Australian Open and French Open to extend his slam total and after being treated for his troublesome foot, he looks set to challenge SW19.

Stick with us for all the buildup, updates, and raffle news.