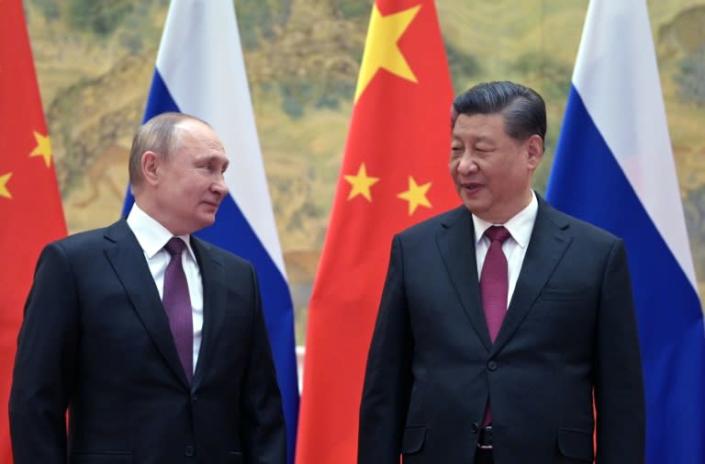 Chinese President Xi Jinping warned against “expanding” military ties on Wednesday in a speech ahead of a virtual summit with top leaders from Russia, India, Brazil and South Africa.

Beijing hosts the meeting of the influential club of emerging economies BRICS, which represents more than 40% of the world’s population and almost a quarter of the world’s gross domestic product.

Three of its members – China, India and South Africa – abstained from voting on a United Nations resolution condemning the Russian invasion of Ukraine.

Xi told the BRICS business forum that “the Ukraine crisis is…a wake-up call” and warned against “expanding military alliances and pursuing one’s own security at the expense of the security of other countries”.

China and India have close military ties with Russia and buy large amounts of its oil and gas.

In a call last week, Xi assured his Russian counterpart Vladimir Putin that China would support Moscow’s core “sovereignty and security” interests, leading the United States to warn Beijing that they risked finding themselves “on the wrong side of history”.

South Africa, one of the few African countries wielding diplomatic influence outside the continent, has also not condemned the Russian military action.

Xi criticized US and European sanctions against Russia in his speech on Wednesday, saying “sanctions are a boomerang and a double-edged sword.”

The leaders of the Group of Seven (G7) countries will meet next week in Germany to discuss how to proceed with sanctions against Russia.

The BRICS summit comes as Russian troops continue to strike eastern Ukraine after invading the country four months ago.

China and India have both increased their imports of crude oil from Russia, helping to offset losses from Western countries that are reducing Russian energy purchases.

India bought six times more Russian oil from March to May compared to the same period last year, while imports from China tripled in that period, according to data from research firm Rystad Energy.

Once bitter Cold War rivals, Beijing and Moscow have stepped up their cooperation in recent years.

President Putin was in Beijing for the opening ceremony of the Winter Olympics in February, just days before the start of the invasion of Ukraine.

Beijing and Moscow also flew bombers over the Sea of ​​Japan and the East China Sea while US President Joe Biden was in Tokyo in late May – signaling strong military ties between the two countries.

“The world was divided between east and west after the war in Ukraine,” New Delhi-based author and geopolitical commentator Manoj Joshi told TUSEN.

He added that the BRICS offered Putin a platform to stand alongside the leaders of emerging economies.

“It sends the message to the US and the EU that they failed to isolate him and Russia,” he said.

Analysts say Beijing will use the summit to promote its model of governance and development at a time of global instability.

China told a meeting of BRICS foreign ministers in May that it wants other emerging economies to join the grouping, although it is unclear whether new members have been invited.

“Beijing would like to shape the BRICS agenda in line with China-centric initiatives,” said Madhu Bhalla, professor and editor of India Quarterly.

“The entry of other members… who toe the Chinese line will help bring the group’s agenda closer to the Chinese agenda,” she said.