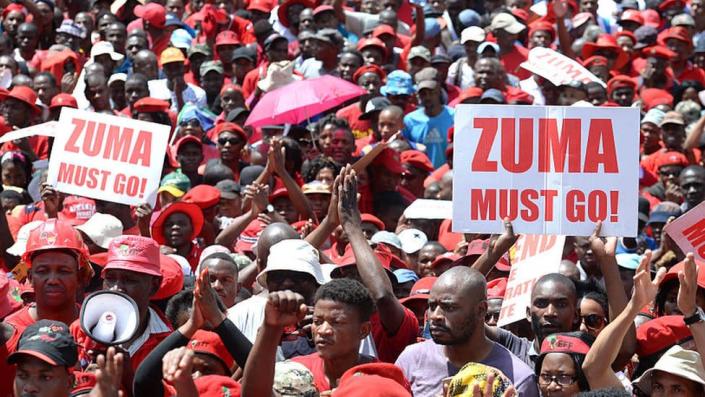 After damning findings from an investigation laid bare the looting of billions of dollars from South African state coffers under his predecessor, President Cyril Ramaphosa vowed he should “never [be] allowed to reproduce.

But South Africans are not so sure that lessons will be learned.

They are angry that the stolen money was spent to support the country’s beleaguered health services and education system.

The mammoth probe into corruption during Jacob Zuma’s presidency has revealed how nearly every arm of the state was suffocated and left bankrupt by the leaders of the African National Congress (ANC), which has ruled the country since the end of the white minority regime in 1994. .

The report is a massive indictment of the party. President Ramaphosa himself was in the line of fire with the judge-led panel saying he should have done more to prevent corruption while serving as Zuma’s deputy.

At more than 5,000 pages, the Zondo Commission – named after its chairman, Chief Justice Raymond Zondo – goes into forensic detail of how state resources were plundered.

It also shows how wealthy businessmen, the Gupta brothers, tried to influence political and economic decisions in a process known as “state capture”.

Zuma was ousted in February 2018 under the cloud of growing corruption allegations and Mr Ramaphosa took over, promising a cleanup.

The last volumes of the report from the Zondo commission were delivered on Wednesday. The president described what was found to be “an attack on our democracy, [violating] the rights of all South Africans”.

But part of the report’s findings leave the current president with questions to answer about why he stayed away.

“Surely there was enough credible information in the public domain … to at least prompt him to investigate and perhaps act on a number of serious allegations.

“As vice president, he surely had a responsibility to do so,” the report said.

Originally scheduled to take place over 180 days, the hearings spanned over 400 days during which more than 300 witnesses testified. The whole process took almost four years.

The evidence revealed how ANC leaders, including former and current government ministers, allegedly participated in or encouraged looting at enormous cost to the country.

This included crippling the country’s revenue department, bringing national carrier South African Airways to its knees, looting the agency that runs the country’s passenger railways and interfering with the public broadcaster, SABC.

The Secret Service was also weakened by the appointment of high-ranking spies who prevented investigations from taking place at the behest of Zuma and others considered close to him.

“The blurring of lines between the ANC and the state has been laid bare, party interests have been privileged, crucial government departments have been used for the benefit of individuals, leading to political manipulation and influence “said South African political scientist Dr Mcebisi Mdletyana.

In a damaging finding made by Judge Zondo, this is further clarified. “The ANC under Zuma enabled, supported and enabled corruption.”

In an attempt to cushion the blow to the ruling party’s blemished reputation, the ANC issued a statement, expressing its gratitude to the commission for the work done and said it would commit to its findings and “take remedial measures”.

South Africans began to see the glaring signs of corruption at the highest level as well as the culture of undue influence and impunity in 2013. It was then that Zuma allowed the Gupta brothers and their guests to land a commercial plane on a military base to attend a wedding. .

This was a clear breach of national security. Questions began to be asked about how this could have happened and about the influence of the Gupta family on the state.

More revelations followed and in 2016 South African public protector Thuli Madonsela published a report detailing the links between the Guptas and the government. She recommended the creation of a judicial commission.

The commission, which began its work in 2018, heard how the Gupta brothers – Ajay, Rajesh and Atul – allegedly orchestrated widespread corruption with the help of Zuma.

They deny any wrongdoing.

The commission showed how Zuma’s son, Duduzane, was “the intermediary between the Guptas and the government and participated in the awarding of government contracts to Gupta-related companies”.

The report also revealed how Zuma colluded with the country’s former spy chief, Arthur Fraser, to shut down an investigation into the Gupta family in 2011, paving the way for a government purse dump.

South African authorities are currently working to extradite the Gupta brothers from the United Arab Emirates to answer for their alleged crimes. They were arrested earlier this month in Dubai following an Interpol red notice.

But others, including some of the most powerful ANC officials, are also expected to face charges of corruption, fraud and money laundering, according to the Zondo commission.

President Ramaphosa said the recommendations made by the commission will be implemented when the time is right.

Asked if action would be taken against members of his cabinet who were implicated, he said he would ‘form an opinion within four months’ and plans would then be presented to parliament.

The test is whether there will be action.

“If South Africa really wants to fight corruption…those who have been involved [will be] successfully charged and prosecuted, [then] a sufficient firewall in the fight against corruption would have been put in place,” said Dr Mdletyana.

But corruption cases are known to drag on for years with many delays and the National Prosecuting Authority will need to be better equipped to do so.

The fact that Zuma is still on trial over corruption allegations over an arms deal struck more than two decades ago – long before he became president – shows how long the process can take.

Additionally, allegations of corruption have swirled around the Ramaphosa government, particularly in the way money was spent during the Covid emergency.

Some analysts have compared the Zondo commission to the work of the country’s Truth and Reconciliation Commission (TRC), which was set up to investigate crimes committed under apartheid.

The hope was that Zondo would draw a line under government corruption, but as with the TRC, there are fears that the recommendations will not be acted upon.

As for the ANC, with less than two years to go until the next general election, the once glorious and trustworthy former liberation movement risks losing massive support.

Furthermore, Justice Zondo’s proposal to change the electoral rules to allow South Africans to directly elect a president instead of using the party system could be devastating for the ruling party since 1994.

His findings have South Africans wondering if an ANC-backed president can be trusted to uphold his oath of office and put the country first.